“Good” versus “Bad” Process. Assets/uploads/2013/10/Gen-Z-Whitepaper.pdf. Generation Z: A Look at the Technology and Media Habits of Today’s Teens. A study on GenZ by Wikia finds that teen users are connected nearly all waking hours of the day and report being more “actively connected” now than even 3 months ago SAN FRANCISCO, CA. – March 18, 2013 – Wikia, the world’s leading collaborative media company and home to many of the Web’s largest pop culture communities, today released findings from a study conducted among its 13-18 year-old users in association with Ipsos MediaCT “GenZ: The Limitless Generation” exploring the complex behaviors of teens and technology. 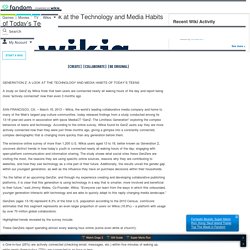 According to the online survey, Wikia found its GenZ users say they are more actively connected now than they were just three months ago, giving a glimpse into a constantly connected, complex demographic that is changing more quickly than any generation before them. The extensive online survey of more than 1,200 U.S. Highlighted trends revealed by the survey include: These GenZers report spending almost every waking hour online (some even while at church!) About the Study. Move over Millennials - it’s time to talk to Gen Z. 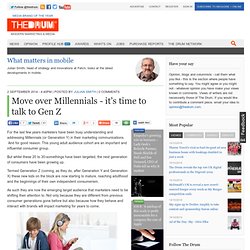 They don’t know of life before Google, Facebook, smart mobile phones or digital TVs. Similarly referred to as the iGeneration, NetGen or Screenagers they have been born into a pervasive digital world where everything and everyone is accessible at the press of a button or click of a mouse. As such they are used to finding information and education, consuming entertainment, communicating, participating and sharing across multiple digital screens. And they are used to achieving these multiple tasks simultaneously, flitting from one screen to another as they do. (For a great overview of the unique characteristics of Gen Z check out a slide show recently produced by Sparks & Honey). The_Future_of_Employment.pdf. Businessinsider. In 2011, Foreign Policy Magazine named Tyler Cowen #72 in their list of the “Top 100 Global Thinkers.” 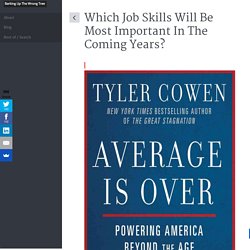 He is a professor of economics at George Mason University and, along with Alex Tabarrok, he blogs at Marginal Revolution, one of the most popular economics sites on the internet. Tyler is a New York Times bestselling author, having written 13 books including Discover Your Inner Economist and The Great Stagnation. His latest book is Average Is Over which gives a fascinating look into where the country is headed, how income inequality, automation and artificial intelligence will change the way we work and live – and who will be the beneficiaries of those changes.

Tyler and I spoke about the skills that will be important in the coming years, when it makes sense to order the worst sounding thing on the menu, and why the ending of “Star Wars” may be at odds with the future. My conversation with Tyler was quite long, so for brevity’s sake I’m only going to post edited highlights here. Join here. CfWI HS Hub. The Future at Work — Trends and Implications.

What does the future hold for work in the 21st century? 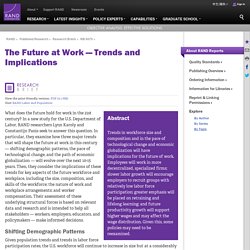 In a new study for the U.S. Department of Labor, RAND researchers Lynn Karoly and Constantijn Panis seek to answer this question. In particular, they examine how three major trends that will shape the future at work in this century — shifting demographic patterns, the pace of technological change, and the path of economic globalization — will evolve over the next 10-15 years. Future of manufacturing. 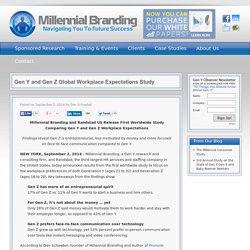 NEW YORK, September 2, 2014 – Millennial Branding, a Gen Y research and consulting firm, and Randstad, the third-largest HR services and staffing company in the United States, today announced results from the first worldwide study to focus on the workplace preferences of both Generation Y (ages 21 to 32) and Generation Z (ages 16 to 20). Key takeaways from the findings show: Workspace Design Trends To Increase Your Productivity. Creating paths for chance meetings, including nooks, and designing agile, unique workspaces are solutions that designers say promote collaboration, creativity, and productivity in the modern office. 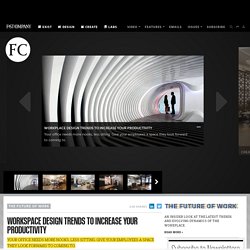 "In the last four to five years, we’ve all been focusing on sustainability and the impact technology has in an office," says Kay Sargent, director of workplace strategies at infrastructure solutions provider Lend Lease. "During this time, we’ve forgotten that we’re designing for people. Now there’s a real focus on trying to maximize human potential, performance, and productivity. " But what is productivity? It’s no longer about sitting at your desk with your head down working all day. "I think of [productivity] as effectively creating ideas and solving problems and a lot of that has to do with being collaborative," says Miguel McKelvey, cofounder and chief creative officer of coworking office space WeWork.