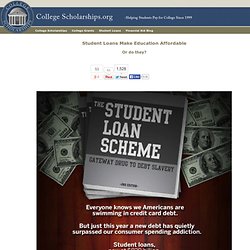 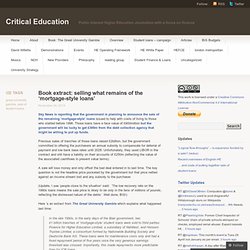 Those loans have a face value of £900million but the government will be lucky to get £300m from the debt collection agency that might be willing to put up funds. Previous sales of tranches of those loans raised £2billion, but the government committed to offering the purchasers an annual subsidy to compensate for deferral of payment and low bank base rates until 2028. Unfortunately, they used LIBOR in the contract and still have a liability on their accounts of £250m (reflecting the value of the associated cashflows in present value terms). A sale will lose money and only offset the bad deal entered in to last time.

The key question is not the headline price pocketed by the government but that price netted against an income stream lost and any subsidy to the purchaser. Privatisation of a portfolio of loans mcgettigan. By Mark Kleinman, City Editor. 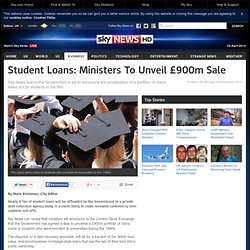 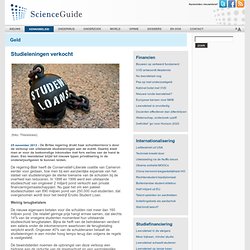 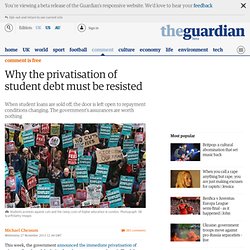 The debt was sold to a consortium of private companies at under one-fifth of its value, but in reality these moves go far beyond the economically unsustainable nature of a credit-fuelled higher education system. They are part of a series of planned student debt sell-offs, and a concerted attempt to irreversibly alter how universities are funded and how this generation relates to education and work. Since 2010, the coalition government has pursued an increasingly open policy of ending universities as a public service. Tuition fees have tripled and public money has been withdrawn – creating a multi-tiered university system competing with itself for who can attract the most lucrative students and gain the most research funding. 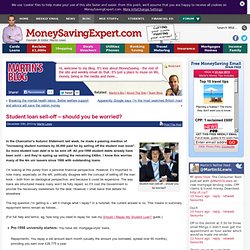 In the Chancellor’s Autumn Statement last week, he made a passing mention of "increasing student numbers by 30,000 paid for by selling off the student loan book". So more student loan debt is to be sold off. All pre-1998 student debts already have been sold – and they’re eyeing up selling the remaining £40bn. I know this worries many of the 4m uni leavers since 1990 with outstanding loans.

I’m looking at this purely from a personal financial perspective. The big question I’m getting is – will it change what I repay? (For full help and terms, eg, how long you need to repay for, see my Should I Repay My Student Loan? Pre-1998 university starters: You have old ‘mortgage-style’ loans. Project Hero and the student loans sell-off – an update and report transcript. Blog By Andrew McGettigan Earlier this year, False Economy revealed that government advisers had called for either higher interest rates on existing student debt or taxpayer subsidies for investors’ profits in order to help privatise the student loans book. 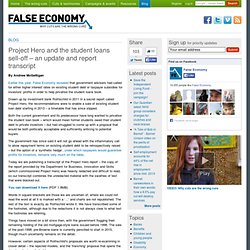 Drawn up by investment bank Rothschild in 2011 in a secret report called Project Hero, the recommendations were to enable a sale of existing student loan debt starting in 2013 – a timetable that has since slipped. Both the current government and its predecessor have long wanted to privatise the student loan book – which would mean former students owed their student debt to private investors – but had struggled to come up with a proposal that would be both politically acceptable and sufficiently enticing to potential buyers. You can download it here (PDF 1.8MB) Words in square brackets are those we are uncertain of; where we could not read the word at all it is marked with a ‘…’ and charts are not republished.

Sale of mortgage style student loan book completed - Press releases. The government has today (25 November 2013) announced the sale of outstanding student loans owed by around a quarter of a million borrowers for £160 million. 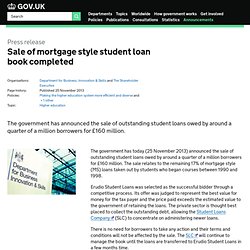 The sale relates to the remaining 17% of mortgage style (MS) loans taken out by students who began courses between 1990 and 1998. Erudio Student Loans was selected as the successful bidder through a competitive process. Its offer was judged to represent the best value for money for the tax payer and the price paid exceeds the estimated value to the government of retaining the loans. The private sector is thought best placed to collect the outstanding debt, allowing the Student Loans Company (SLC) to concentrate on administering newer loans. There is no need for borrowers to take any action and their terms and conditions will not be affected by the sale. Universities and Science Minister David Willetts said: 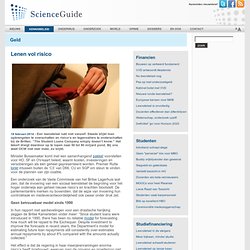 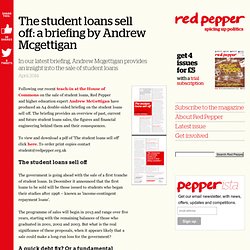 The briefing provides an overview of past, current and future student loans sales, the figures and financial engineering behind them and their consequences. To view and download a pdf of 'The student loans sell off' click here. To order print copies contact student@redpepper.org.uk. Student loans: not even Cameron could privatise the unprivatisable. Policy usually comes to us in beautiful choreography. Kites are flown by tame thinktanks, lobby briefings dispensed by Westminster’s finest – until, finally, the latest legislative flatulence is given the appearance of solidity by Queen’s speeches and green and white papers. But occasionally the pattern breaks.

A minister blurts out something or a document slips loose. A curtain is yanked back and we get an insight into the chaos normally presented with supreme confidence. Such a rare event happened last weekend. This is a lot of money to lose on a Saturday morning. Privatisation-of-student-loan-book-to-be-scrapped-9617742. Mr Cable, who can take the final decision as the Secretary of State responsible for higher education, revealed the planned sell-off had been scrapped at a meeting of the Social Liberal Forum, a Lib Dem activists group.

Earlier this month, he reportedly vetoed the privatisation of the Land Registry following a series of rows between Conservatives and Liberal Democrats in the Cabinet. It was unclear last night whether the rest of the Cabinet had been made aware of the decision on student loans. “The government was considering the sale of student loans on the basis that it would reduce government debt. Recent evidence suggests this will no longer be the case,” he told the forum, according to The Guardian. “Given there is no longer any public benefit, Nick Clegg and I have agreed not to proceed with the sale.” ‘Pay It Forward’ Plans Are No Cure for Rising College Costs, Report Says – The Ticker. A new report refutes the proposed “Pay It Forward” model of paying for college, saying in a point-by-point analysis that it would leave most graduates deeper in debt than if they had taken out loans, and would throw colleges’ balance sheets into uncertainty, among other things.

The report, released by the American Association of State Colleges and Universities, assails the idea of allowing students to attend college without having to take out loans while requiring them to devote a portion of their later earnings to paying off tuition. First proposed by students at Portland State University, Pay It Forward has drawn increasing criticism since Oregon passed a law to study the idea. Among the criticisms in the association’s report: Pay It Forward does not account for nontuition costs like room and board.Students who generally rack up the most debt—those at for-profit and private nonprofit institutions—would not be eligible for the program.The program would have “enormous” start-up costs.

What Can We Do Now That Adjunct Sections are Written Into Universities’ Fiscal Survival Strategy? ~ Remaking the University. By Jennifer Ruth, English Department, Portland State University This is the second of a two part post. Part One “Why are Faculty Complicit in Creating a Disposable Workforce?” Appeared last week. We need rapidly to increase pressure on university administrators for change. I believe that administrators are slowly digesting the (academic and public relations) downsides of relying on instructors to whom the institution makes no real commitment, but at the same time they are under unprecedented budget pressures. But the adjunct crisis is tricky in this context. Consultatie Wetvoorstel wijziging rentepercentage lening hoger onderwijs.