Het nonconformisme van de babyboomer. A gift too far? Questions are asked about donor's terms. Academics claim that big corporate giver is allowed to vet professors, reports John Morgan Private corporations are focusing on US universities "to further a political ideology of free markets and diminished government regulation", according to critics of a libertarian billionaire's $1.5 million (£920,000) donation to a public educational institution. 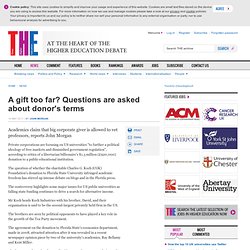 The question of whether the charitable Charles G. Koch (CGK) Foundation's donation to Florida State University infringed academic freedom has stirred up intense debate on blogs and in the Florida press. The controversy highlights some major issues for US public universities as falling state funding continues to drive a search for alternative income. Mr Koch heads Koch Industries with his brother, David, and their organisation is said to be the second-largest privately held firm in the US.

The brothers are seen by political opponents to have played a key role in the growth of the Tea Party movement. john.morgan@tsleducation.com. THE CORPORATION [17/23] Unsettling Accounts. Jane Akre. Professional life[edit] Akre began her career at a small radio station as a news reporter and occasional disc jockey in 1978. 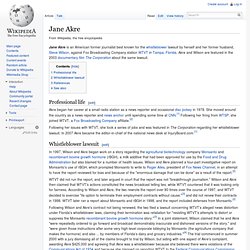 She moved around the country as a news reporter and news anchor until spending some time at CNN.[1] Following her firing from WTSP, she joined WTVT, a Fox Broadcasting Company affiliate.[2] Following her issues with WTVT, she took a series of jobs and was featured in The Corporation regarding her whistleblower lawsuit. In 2007 Akre became the editor-in-chief of the national news desk at InjuryBoard.com.[1] Whistleblower lawsuit[edit] Jane Akre and Steve Wilson. The DeVos Family: Meet the Super-Wealthy Right-Wingers Working With the Religious Right to Kill Public Education. May 6, 2011 | Like this article? Join our email list: Stay up to date with the latest headlines via email. Since the 2010 elections, voucher bills have popped up in legislatures around the nation.

From Pennsylvania to Indiana to Florida, state governments across the country have introduced bills that would take money from public schools and use it to send students to private and religious institutions. Koch and George Mason University. Right-wing billionaires purchasing own professors - War Room. In the marketplace of ideas, all that matters is the strength of your argument, and whether or not you are a billionaire. That is the wonderful ideal America is striving for: the unregulated free exchange of paid-for speech representing the interests of an incredibly elite few. And to that end, Charles Koch, of the Koch brothers (official “bad guys” of liberalism in 2011), is purchasing the economics department of Florida State University.

That is, the Charles G. Koch Charitable Foundation has pledged $1.5 million to FSU, to endow two professorships. The Koch Brothers and the End of State Universities. The real scandal around the endowment by the Koch brothers of two chairs at Florida State University is that state universities now have to seek such outside money and accept strings. 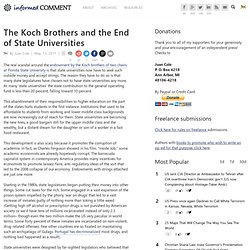 The reason they have to do so is that many state legislatures have chosen not to have state universities any more. At many ‘state universities’ the state contribution to the general operating fund is less than 20 percent, falling toward 10 percent. Billionaire's role in hiring decisions at Florida State University raises questions.

A conservative billionaire who opposes government meddling in business has bought a rare commodity: the right to interfere in faculty hiring at a publicly funded university. 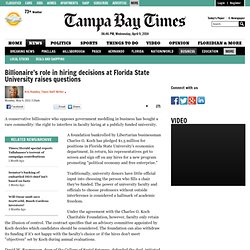 A foundation bankrolled by Libertarian businessman Charles G. Koch has pledged $1.5 million for positions in Florida State University's economics department. In return, his representatives get to screen and sign off on any hires for a new program promoting "political economy and free enterprise. " Traditionally, university donors have little official input into choosing the person who fills a chair they've funded. 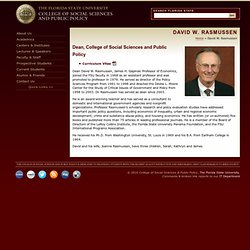 (pdf)de-wetenschap als-reclamebureau. World Congress for freedom of scientific research. Radder commodification of scientific research. Toegang tot onderzoeksdata. Cardiac Society Draws Bulk of Funding From Stent Makers. The Society for Cardiac Angiography and Interventions got more than half its income in 2009 from medical device and pharmaceutical makers. 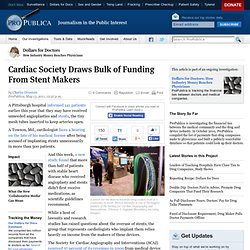 This week, a study in JAMA questioned why more patients who received angioplasty and stents didn’t first receive recommended medications. And this week, a new study found [4] that more than half of patients with stable heart disease who received angioplasty and stents didn't first receive medications, as scientific guidelines recommend. While a host of lawsuits and research studies has raised questions about the overuse of stents, the group that represents cardiologists who implant them relies heavily on income from the makers of these devices.

The Society for Cardiac Angiography and Interventions (SCAI) received 57 percent of its revenues in 2009 [5] from medical device and pharmaceutical makers, according to financial information on the group's website. SCAI's immediate past president, Dr. Stents are big business. In 2008 and 2009, Sens. RU heeft weer reden tot feest. Should Scientists Take Military Money? - The Chronicle Review. May 15, 2011 Jon Krause for the Chronicle Review Enlarge Image By John Horgan In the summer of 2005, I became, briefly, a tool of the military-industrial complex. 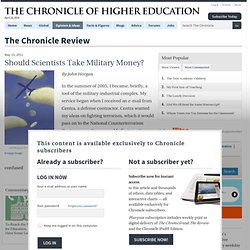