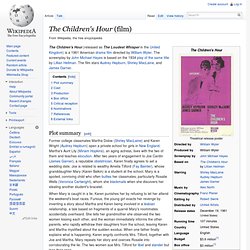 Martha's Aunt Lily (Miriam Hopkins), an aging actress, lives with the two of them and teaches elocution. After two years of engagement to Joe Cardin (James Garner), a reputable obstetrician, Karen finally agrees to set a wedding date. Joe is related to wealthy Amelia Tilford (Fay Bainter), whose granddaughter Mary (Karen Balkin) is a student at the school. Mary is a spoiled, conniving child who often bullies her classmates, particularly Rosalie Wells (Veronica Cartwright), whom she blackmails when she discovers her stealing another student's bracelet.

When Mary is caught in a lie, Karen punishes her by refusing to let her attend the weekend's boat races. The Children's Hour (La Calumnia) S.MacLaine & A.Hepburn. The Nutty Professor - 1963. In 2004, The Nutty Professor was selected for preservation in the United States National Film Registry by the Library of Congress as being "culturally, historically, or aesthetically significant". 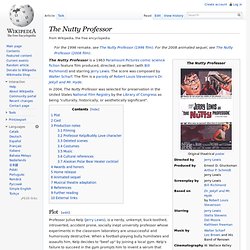 Plot[edit] Professor Julius Kelp (Jerry Lewis), is a nerdy, unkempt, buck-toothed, introverted, accident prone, socially inept university professor whose experiments in the classroom laboratory are unsuccessful and humorously destructive. When a football-playing bully humiliates and assaults him, Kelp decides to "beef up" by joining a local gym. The Nutty Professor (1963) trailer. To Sir, with Love. A made-for-television sequel, To Sir, with Love II, was released nearly three decades later, with Poitier reprising his starring role. 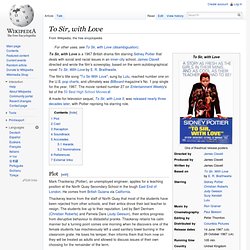 Plot[edit] Mark Thackeray (Poitier), an unemployed engineer, applies for a teaching position at the North Quay Secondary School in the tough East End of London. He comes from British Guiana via California. To Sir, with Love (1967) To Sir, With Love (1967) (Part 1) If.... If.... won the Palme d'Or at the 1969 Cannes Film Festival.[3] In 2004, the magazine Total Film named it the sixteenth greatest British film of all time. 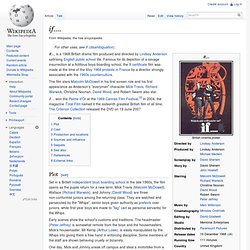 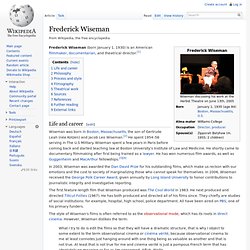 Wiseman spent a few years in Paris before coming back and started teaching law at Boston University's Institute of Law and Medicine. He shortly came to documentary filmmaking after first being trained as a lawyer. He has won numerous film awards, as well as Guggenheim and MacArthur fellowships.[3][4] In 2003, Wiseman was awarded the Dan David Prize for his outstanding films, which make us reckon with our emotions and the cost to society of marginalizing those who cannot speak for themselves.

The style of Wiseman's films is often referred to as the observational mode, which has its roots in direct cinema. In spring 2012 Wiseman took actively part in the three month exposition of Whitney Biennial.[5] Titicut Follies. The title of the film is taken from a talent show put on by the hospital's inmates, which was named after the Wampanoag word for the nearby Taunton River. 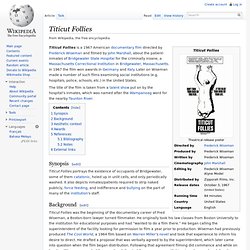 Synopsis[edit] Titicut Follies portrays the existence of occupants of Bridgewater, some of them catatonic, holed up in unlit cells, and only periodically washed. It also depicts inmates/patients required to strip naked publicly, force feeding, and indifference and bullying on the part of many of the institution's staff. Wiseman - High School (1968 film) High School - Frederick Wiseman, 1968. The Dangling Conversation (High School, 1968) "At Berkeley" documentary excerpts. 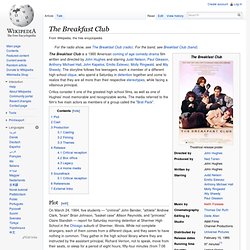 While not complete strangers, each of them comes from a different clique, and they seem to have nothing in common. They gather in the high school library where they are instructed by the assistant principal, Richard Vernon, not to speak, move from their seats, or sleep for a period of eight hours, fifty-four minutes (from 7:06 AM to 4 PM). He assigns a 1,000-word essay to the students in which each must write about who he or she thinks he or she is. He then leaves, returning only occasionally to check on them. The students pass the hours by arguing and smoking marijuana that Bender retrieves from his locker. Stand and Deliver - 1988. Stand and Deliver is a 1988 American drama film based on the true story of high school math teacher Jaime Escalante. 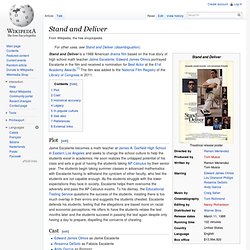 Edward James Olmos portrayed Escalante in the film and received a nomination for Best Actor at the 61st Academy Awards.[1] The film was added to the National Film Registry of the Library of Congress in 2011. Plot[edit] Cast[edit] Edward James Olmos as Jaime EscalanteRosanna DeSoto as Fabiola EscalanteAndy García as RamirezLou Diamond Phillips as Angel Guzman. Stand and Deliver - What's calculus? Lean on Me (film) 1989. The next day, Clark runs into one of the expelled youths, Thomas Sams (Jermaine Hopkins), who asks to be let back into the school. 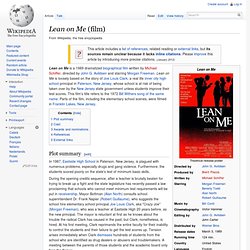 In a dramatic rooftop scene, Clark gives him a sharp lecture about crack and what can happen to Sams if he keeps on using it. Clark then dares Sams to commit suicide by jumping off the roof, but Sams, breaking down in tears, refuses and promises to clean up his act. Clark grants him a second chance to turn things around. However, another expelled student manages to get inside the school and attack another student before Clark comes to break up the fight. Knowing he is breaking the fire code, Clark orders all doors chained and locked during school hours to keep drug dealers out, and enlists security guards to keep the fire chief out of the school. Dead Poets Society - 1989. Plot[edit] Neil Perry, Todd Anderson, Knox Overstreet, Charlie Dalton, Richard Cameron, Steven Meeks, and Gerard Pitts are senior students of the Welton Academy, an elite prep school, whose ethos is defined by the headmaster Gale Nolan as "tradition, honor, discipline and excellence". 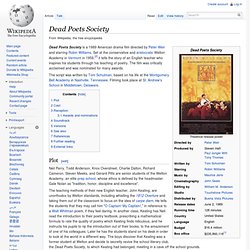 The teaching methods of their new English teacher, John Keating, are unorthodox by Welton standards, including whistling the 1812 Overture and taking them out of the classroom to focus on the idea of carpe diem. He tells the students that they may call him "O Captain! My Captain! ," in reference to a Walt Whitman poem, if they feel daring. Due to self-consciousness, Todd fails to complete a writing assignment and Keating takes him through an exercise in self-expression, realizing the potential he possesses. Être et avoir - 2002. Être et avoir (2002) is een Franse documentaire die over een van de vele Franse dorpsschooltjes gaat. Être et avoir (2002. The Chorus (2004 film) The Chorus (French: Les Choristes) is a 2004 French drama film directed by Christophe Barratier.

Co-written by Barratier and Philippe Lopes-Curval (fr), it is an adaptation of the 1945 film A Cage of Nightingales (La Cage aux rossignols), which in turn was adapted by Noël-Noël and René Wheeler from a story by Wheeler and Georges Chaperot. The plot involves the widely successful orchestra conductor Pierre Morhange (Jacques Perrin), who returns to France when his mother dies. He reminisces about his childhood inspirations when he and his former classmate Pépinot (Didier Flamand) read the diary of their old music teacher Clément Mathieu (Gérard Jugnot). History Boys (2006. The History Boys Movie Trailer. Entre les murs - 2008. Verhaal[bewerken] François is een jonge leraar Frans die les geeft op een Frans college in het 19e arrondissement van Parijs, hij is bovendien mentor van deze (moeilijke) klas.