Why Ernesto Laclau is the intellectual figurehead for Syriza and Podemos. When Ernesto Laclau passed away last April aged 78, few would have guessed that this Argentinian-born, Oxford-educated post-Marxist would become the key intellectual figure behind a political process that exploded into life a mere six weeks later, when Spanish leftist party Podemos won five seats and 1.2m votes in last May’s European elections. 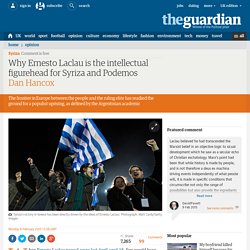 Throughout his academic career, most of which he spent as professor of political theory at the University of Essex, Laclau developed a vocabulary beyond classical Marxist thought, replacing the traditional analysis of class struggle with a concept of “radical democracy” that stretched beyond the narrow confines of the ballot box (or the trade union). Most importantly for Syriza, Podemos and its excitable sympathisers outside Greece and Spain, he sought to rescue “populism” from its many detractors.

On the Mediterranean side of austerity Europe, the common enemy is not hard to discern. Why, Laclau asked, should this necessarily be so? What Makes Mainstream Media Mainstream, by Noam Chomsky. Part of the reason why I write about the media is because I am interested in the whole intellectual culture, and the part of it that is easiest to study is the media. 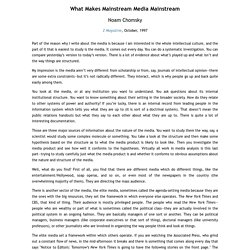 It comes out every day. You can do a systematic investigation. You can compare yesterday’s version to today’s version. There is a lot of evidence about what’s played up and what isn’t and the way things are structured. My impression is the media aren’t very different from scholarship or from, say, journals of intellectual opinion—there are some extra constraints—but it’s not radically different. You look at the media, or at any institution you want to understand. Message from Guantanamo prison cells. Nearly 100 of the 166 Guantanamo detainees are on hunger strike. 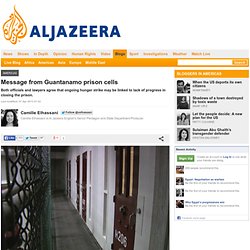 Defence lawyers say the number is much higher. And 11 weeks since the strike began, the crisis shows no sign of abating. Hunger strike has been used by the detainees for years to protest against their detention. This time, detainee lawyers say when the US army took over operation of the facility earlier this year, they were heavy-handed, which led to the protest. It's a charge Guantanamo officials deny. Officials at Guantanamo define hunger strike as missing nine consecutive meals. Serie: Hartz IV verstößt gegen internationales und nationales Recht. Tax Justice Network. Clean IT – Leak shows plans for large-scale, undemocratic surveillance of all communications.

By EDRi This article is also available in: Deutsch: [CleanIT – Pläne zur Überwachung des Internets im großen Stil | A leaked document from the CleanIT project shows just how far internal discussions in that initiative have drifted away from its publicly stated aims, as well as the most fundamental legal rules that underpin European democracy and the rule of law. 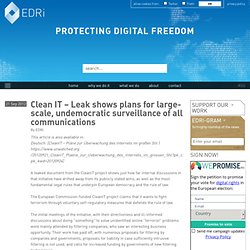 The European Commission-funded CleanIT project claims that it wants to fight terrorism through voluntary self-regulatory measures that defends the rule of law. The myth of freedom in the land of the free. New Haven, CT - In 1893, a massive financial panic sent demand for the Pullman Palace Car Company into a downward spiral. 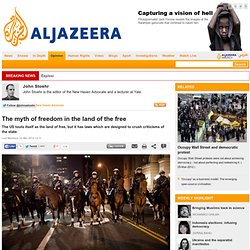 The luxury rail car company reacted by slashing workers' wages and increasing their work load. After negotiations with ownership broke down the following year, the American Railway Union, in solidarity with Pullman factory workers, launched a boycott that eventually shut down railroads across the US. It was a full-scale insurrection, as the late historian Howard Zinn put it, that soon "met with the full force of the capitalist state". The US Attorney General won a court order to stop the strike, but the union and its leader, Eugene V Debs, refused to quit. President Grover Cleveland, over the objections of Illinois' governor, ordered federal troops to Chicago under the pretense of maintaining public safety.

I imagine a similar revelation for the tens of thousands of Americans who participated in last fall's Occupy Wall Street protests. Selling war from 1917 to 2012. This is the second article in a two-part series. 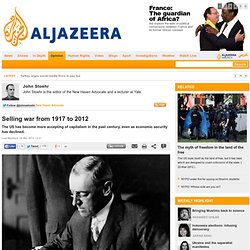 Read Part One here. New Haven, Connecticut - One day in 1917, US President Woodrow Wilson sat in his office scratching his head. He faced a dilemma. Why Americans Will Believe Almost Anything.