First official RDR stats: adviser numbers down 20%, bank advisers fall 44% 27 March 2013 10:00 am | By Natalie Holt The number of IFAs and tied advisers operating on the first day of the RDR was 20 per cent down on December 2011 figures while the number of bank advisers fell 44 per cent. 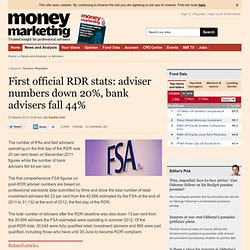 The first comprehensive FSA figures on post-RDR adviser numbers are based on professional standards data submitted by firms and show the total number of retail investment advisers fell 23 per cent from the 40,566 estimated by the FSA at the end of 2011 to 31,132 at the end of 2012, the first day of the RDR. The total number of advisers after the RDR deadline was also down 13 per cent from the 35,899 advisers the FSA estimated were operating in summer 2012.

Of the post-RDR total, 30,045 were fully qualified retail investment advisers and 965 were part qualified, including those who have until 30 June to become RDR compliant. Wealth Transfer Planning, Part I: I don’t want to talk about it. Whilst the Vikings and the Pharaohs may have believed otherwise, today most people seem to accept the old adage ‘you can’t take it with you when you’re gone’. 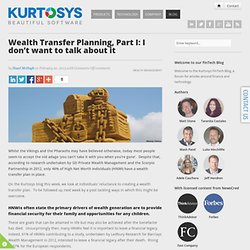 Despite that, according to research undertaken by SEI Private Wealth Management and the Scorpio Partnership in 2012, only 46% of High Net Worth Individuals (HNWI) have a wealth transfer plan in place. On the Kurtosys blog this week, we look at individuals’ reluctance to creating a wealth transfer plan. To be followed up next week by a post tackling ways in which this might be overcome. HNWIs often state the primary drivers of wealth generation are to provide financial security for their family and opportunities for any children. Social Media ROI: How To Define a Strategic Plan. As marketers are tasked with the challenge of doing less with more, there's an increasing demand to quantify the value of social media. 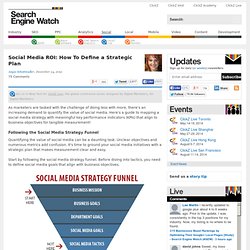 Here's a guide to mapping a social media strategy with meaningful key performance indicators (KPIs) that align to business objectives for tangible measurement! Following the Social Media Strategy Funnel Quantifying the value of social media can be a daunting task. Unclear objectives and numerous metrics add confusion. It's time to ground your social media initiatives with a strategic plan that makes measurement clear and easy. Blog Topics Financial Advisors Can Write About.

You’re a financial advisor with a blog. 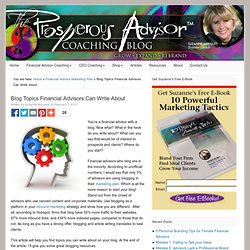 Now what? What in the heck do you write about? What can you say that would be of interest to prospects and clients? Where do you start? Financial advisors who blog are in the minority. This article will help you find topics you can write about on your blog. State of the Media: The Social Media Report 2012.

Protection Review. Latest Here's a quick list of what is keeping us busy at the moment: - We're already planning the 2014 conference and dinner - IFA & Media protection training - Consultancy work in the UK and internationally. 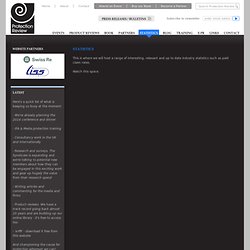 Independent Financial Adviser Search. The Ultimate Complete Final Social Media Sizing Cheat Sheet. By Dan Wilkerson / November 12, 2012 Social Media In June of this year, we published an infographic listing all of the sizing information for images on Facebook, Twitter, Google+, and Pinterest. 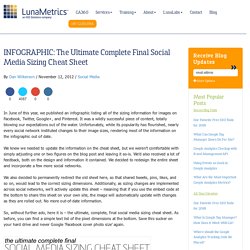 It was a wildly successful piece of content, totally blowing our expectations out of the water. The Mercato. Social media demographics 2012: 24 sites including Twitter, Facebook, and LinkedIn. Connect with leaders from the companies in this story, in real life: Come to the fourth annual VentureBeat Mobile Summit April 14-15 in Sausalito, Calif. 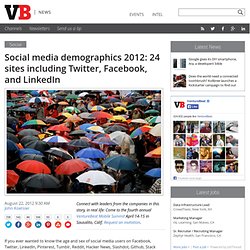 Performance monitoring service Pingdom has done another one of its mammoth social media studies, this one on the demographics of social media sites – every site imaginable, one would think, except for Google+. (Because Google+ is not directly monetized yet, the service does not appear in DoubleClick Ad Planner, the tool Pingdom uses to gather the data.) Above: Age distribution across social networks Image Credit: Pingdom. The Winners and Losers of Social Media in 2012. 2012 was indeed a crazy year in social media. 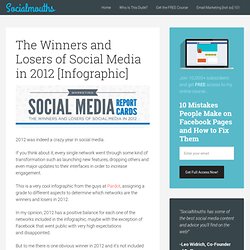 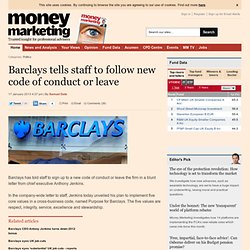 How to add video to your LinkedIn profile in less than one minute. Financial Services. Marketing Whitepapers & Ebooks. 21 Step Salesletter Formula. Salesletter Formula: 21 Effective Ways and Guides to a good Sales piece The Salesletter Formula can be a big help with your marketing plan, when you know exactly how to follow. 12 Things To Do After You’ve Written A New Blog Post - Infographic. So, you’ve simply written a brand new web post. 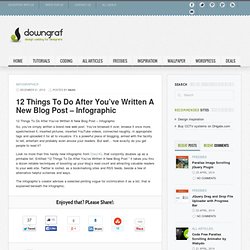 You’ve browsed it over, browse it once more, spellchecked it, inserted pictures, inserted YouTube videos, connected naughty, in appropriate tags and uploaded it for all to visualize. It’s a powerful piece of blogging, armed with the facility to tell, entertain and probably even arouse your readers. But wait… how exactly do you get people to read it? What Happens to Your Social Media Life When You Die? San Francisco resident Sarah Buhr's friend Tiffany passed away a couple of months ago but Buhr still hears from her on Facebook.

Tiffany's Likes, and other people's comments on Tiffany's profile, push her information onto Buhr's newsfeed, offering a frequent reminder that her friend is gone. Buhr says she felt she had to unfriend Tiffany because it was too difficult to be reminded of the loss nearly everyday. Jeff Lutz has a similar story. His beloved grandfather's wife, Laurel Lutz, passed away in 2011. Her side of the family must have continued to operate Laurel's Facebook page because Lutz said he continued to see updates and Likes. "In the first week after Laurel passed, a note went on her Facebook wall thanking her family via various inside jokes and drinking references," he says. Death is a topic people tend to avoid thinking about. Revealed: SJP's instructions to advisers - ifaonline mobile.

Alasdair Pal | IFAonline | 18 December 2012 | 07:51 Tied wealth manager St James’s Place has sent its advisers guidance on how best to describe its restricted service. In an extensive Retail Distribution Review (RDR) briefing note seen by , the firm - the UK's largest adviser with £32.8bn of assets under management - tells advisers to stress its restricted range of funds has been "carefully selected" by SJP, and ensure clients do not switch off trail commission post-RDR.

The comparison service lists products that are available direct from lenders and via brokers. Where products are available only through a broker, users are passed to one of 10 brokers Google has selected, who pay Google for each lead. The brokers include Turnkey Mortgages, Your Mortgage Decisions, Think Loans Mortgages, Which? Mortgage Advisers, Charwin Private Clients, First Union Mortgages, If I Were You, Mortgage Pro, A Mortgage Now and Sensible Home Finance. A Google search for “mortgages” brings up the ‘Compare Mortgages with Google’ option. Lenders who have commercial agreements with Google will have their contact details and website link displayed.

Prediciting the next crash. Stephen Fitzpatrick is the Strategy Director of the Social Business Group at Profero What if an early warning system existed that could raise the alarm on the next financial crisis? What if such a network already existed before the crisis, but we simply didn’t know where to look? It would certainly have been helpful to politicians and regulators in the UK. There were signs for those prepared to look for them.

The Toughest Question from Clients and How to Answer it. Business Building Category: Cicero Group. Unbiased - Find an Independent Financial Adviser (IFA), Mortgage Adviser, Accountant or Solicitor. Campbell Macpherson: 10 questions you should ask your network. The Legal Issues of Social Media in the UK. 25 Unmissable Social Media Articles To Read This Weekend – 17th Nov. FSA warns firms 'often fall foul' of promotions rules on social media. The FSA has issued a warning to companies using social media, saying they “often fall foul” of the financial promotions rules and will face regulatory action. Speaking at the Tax Incentivised Savings Association annual conference in London this week, FSA head of asset management Ed Harley said its rules apply to all media.

Understanding Like-gate. Several prominent people are up in arms about Facebook charging for access to users who have already Liked their page. I believe this debate is missing the big picture, and what we are in fact witnessing is the unfurling of the full-fledged Facebook business model. 20 Stats Every Global Social Media Marketer Should Know. Wake up your Wealth launches online IFA pension service. Wake up your Wealth has today launched what it claims to be the first fully independent online pensions advice service. The Pension Wizard uses algorithm-based advice, which is already used in online propositions in the United States, to recommend low cost, passive funds.

Unlucky for some: 13 slides on how RDR will affect demand for advice. Jim Stengel: Obama's Win: What It Teaches Business. Given the economic doldrums of the past four years, President Obama was unlikely to win reelection this week. The fact that he did says a lot about the strength of his "brand ideal" and the effectiveness of his campaign. Directory Results.

10 Business Promotion Techniques in Facebook. Would you like to improve attendance and activity on your business page in Facebook? We have prepared for you some interesting practical tools for this task – 10 business tools that will help to increase the popularity of your page. 1. Establish Contact with the Managers of other Pages in the Social Network This is a great move. Contact with admins of other pages on Facebook that have the target audience, similar to yours. FACEBOOK: I WANT MY FRIENDS BACK. If you want to send Facebook a message, please feel free to use our graphics for your Facebook page. Adviser KnowHow: How to get charging right. Barclays to introduce fairer incentives scheme - October - 2012.