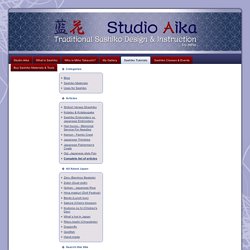 Space the stitches when pattern lines meet, so they don’t touch. This will make the pattern look more elegant. A stitch must end right at the turn of a corner. Make the last stitch right into the corner so the pattern will be nicely defined. Sashiko stitching - Wikipedia. Sashiko (刺し子? 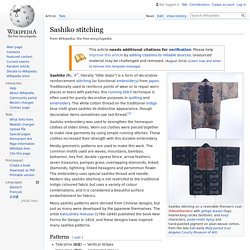 , literally "little stabs") is a form of decorative reinforcement stitching (or functional embroidery) from Japan. Traditionally used to reinforce points of wear or to repair worn places or tears with patches, this running stitch technique is often used for purely decorative purposes in quilting and embroidery. The white cotton thread on the traditional indigo blue cloth gives sashiko its distinctive appearance, though decorative items sometimes use red thread.[1] 128.刺し子模様 正方形基本</td> Sashiko Tutorial – Saké Puppets. Sashiko 刺し子 is a Japanese style of needlework. 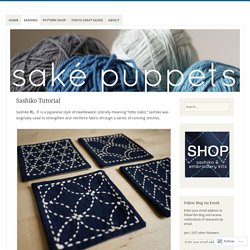 Literally meaning “little stabs,” sashiko was originally used to strengthen and reinforce fabric through a series of running stitches. Sashiko has evolved into a more decorative form and today is used to create patterns on table linens and tenugui, cloth bags, and clothing such as kimono. Sashiko is best-known for its striking style of natural-color yarn on indigo fabric, though modern patterns are stitched in any color, pattern, or on any fabric. Sashiko is easy to learn and fun to master. FREE Sashiko Embroidery Patterns - Set 1. The sashiko stitch is worked in the same manner as a basic running stitch. 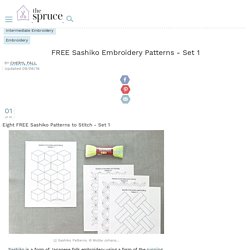 The only difference is that the space in between each stitch must be half the length of a full stitch. The stitches are longer and the gaps are half the size of the stitches. Sashiko patterns should be worked in heavier embroidery threads such as all 6 strands of embroidery floss, a size 8 or 22 pearl cotton or traditional sashiko thread, which comes in different weights and many colors. Yung Wong: jeune créateur. Yung Wong – Collection » Suprematism Of Architecture » – Spring Summer 2014. 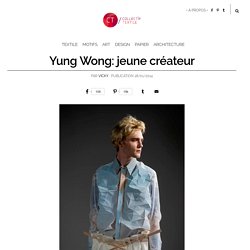 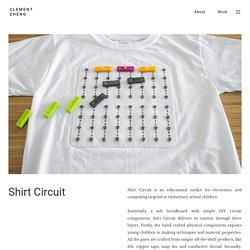 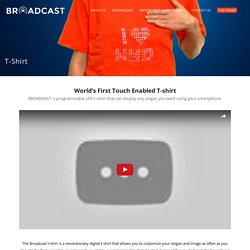 The Broadcast t-shirt is a revolutionary digital t-shirt that allows you to customize your slogan and image as often as you like. It’s the first wearable, commercially available, a programmable digital t-shirt designed for you to break the boundaries of your digital creativity. The Broadcast t-shirt consists of tiny LED's that connect with the accompanying app to give you complete control over what you wish to say. The only limit is your own imagination. Social Textiles. The way we represent ourselves in social media is intangible. 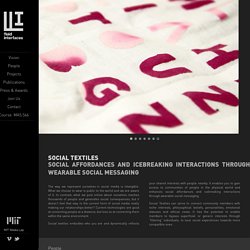 What we choose to wear is public to the world and we are aware of it. TUBES FINS 2x1MM ROND. ISSEY MIYAKE Official Site. Miyake’s first encounter with design was in his home-town of Hiroshima in which were two bridges: to live and to die, situated near the epicenter where the Atomic Bomb hit. 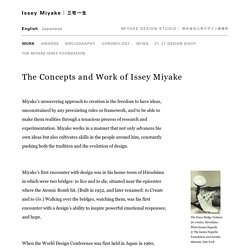 (Built in 1952, and later renamed: to Create and to Go.) Walking over the bridges, watching them, was his first encounter with a design’s ability to inspire powerful emotional responses; and hope. When the World Design Conference was first held in Japan in 1960, Miyake, who was a student at the then Faculty of Graphic Design at Tama Art University, sent a letter to the head office, questioning why clothing design was not included in the program. His focus on clothing as design instead of fashion gained attention. 21_21 DOCUMENTS.

The National Art Center, Tokyo will hold an exhibition which focuses on the work of Miyake Issey, a designer and a 21_21 DESIGN SIGHT Director, starting on March 16, 2016. 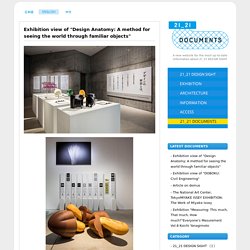 The National Art Center, Tokyo "MIYAKE ISSEY EXHIBITION: The Work of Miyake Issey" Date: March 16 (Wed) - June 13 (Mon), 2016 Closed on Tuesdays, except May 3 Venue: The National Art Center, Tokyo Special Exhibition Gallery 2E Opening hours: 10:00-18:00; 10:00-20:00 on Fridays *Last admission 30 minutes before closing. Innovation Platform overview. Techstyle exhibition explores technology's impact on fashion. A purse that charges a cell phone and an animated dress that displays tweets are among the pieces that will be presented in an upcoming exhibition at Boston's leading art museum. Called #techstyle, the show opens 6 March and runs until 10 July 2016 at the Museum of Fine Arts, Boston (MFA), one of the largest museums in the United States.

Folding a part. MANUFACTURE NEW YORK. New Fabric Uses Sun and Wind to Power Devices. Science and Technology Earth and Environment By Josh Brown | September 13, 2016 • Atlanta, GA A piece of fabric woven with special strands of material that harvest electricity from the sun and motion. Fabrics that can generate electricity from physical movement have been in the works for a few years. Now researchers at Georgia Institute of Technology have taken the next step, developing a fabric that can simultaneously harvest energy from both sunshine and motion. Combining two types of electricity generation into one textile paves the way for developing garments that could provide their own source of energy to power devices such as smart phones or global positioning systems.

School of Materials Science and Engineering. Tutorials. Free T-Shirt & Design Resources. The Cocoon. Our Fashion Week theme this year is, “Beyond Human”. Thinking of this concept, beyond human, makes me question what does it really mean to BE human? Humans have emotions, we grow, we have passion and choice, but above all, we have spirituality. Conceptually, spirituality is the main aspect that separates humans from other animals: the ability to believe, the ability to wonder. Knowing this, I tried to dig one step further into this concept of beyond human, and figure out the meaning of spirituality.

Involving the Machines. The objective of this project is to explore the combination of semi-automated machinery and handcraft processes for the production of electronic textiles. Electronic textiles (E-Textiles) are textiles that have electronic components embedded in them, or are constructed from fibers with electronic properties. We are interested in creating E-Textiles that have the ability to sense various stimuli such as pressure, bend and stretch. Whereas industry often looks to automate processes and eliminate human involvement, we are interested in developing production processes that rely heavily on human intervention and skill, while taking advantage of automation.