Six Proposals for Future Policies towards Circular Economy and Society. It's time for the circular economy to go global - and you can help. It is time for a radical rethink about our relationship with natural resources. 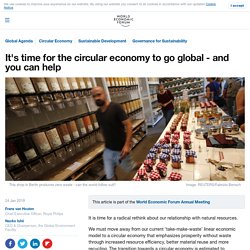 We must move away from our current ‘take-make-waste’ linear economic model to a circular economy that emphasizes prosperity without waste through increased resource efficiency, better material reuse and more recycling. The transition towards a circular economy is estimated to represent a $4.5 trillion global growth opportunity by 2030, while helping to restore our natural systems. 2019 Circularity Gap Report reveals that the world is only 9% circular and the trend is negative. The world can maximise its chances of avoiding dangerous climate change by moving to a circular economy, reveals a report from Circle Economy launched today at Davos during the annual meeting of the World Economic Forum in partnership with other European Circular Economy Stakeholder Platform Coordination Group members such as Sitra, the Finnish Innovation Agency, and the World Council for Sustainable Development. 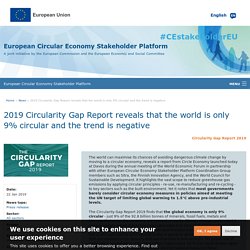 It highlights the vast scope to reduce greenhouse gas emissions by applying circular principles - re-use, re-manufacturing and re-cycling - to key sectors such as the built environment. Yet it notes that most governments barely consider circular economy measures in policies aimed at meeting the UN target of limiting global warming to 1.5°C above pre-industrial levels. The Circularity Gap Report 2019 finds that the global economy is only 9% circular - just 9% of the 92.8 billion tonnes of minerals, fossil fuels, metals and biomass that enter the economy are re-used annually. It's time to include developing nations more holistically in circular economy discussions. We've all heard of the "circular economy," but too often the narrative has been dominated by talk of high-tech innovations and redesigning business models to prevent excessive consumption. 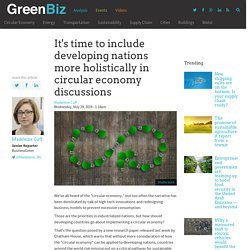 Those are the priorities in industrialized nations, but how should developing countries go about implementing a circular economy? That's the question posed by a new research paper released last week by Chatham House, which warns that without more consideration of how the "circular economy" can be applied to developing nations, countries around the world risk missing out on a critical pathway for sustainable growth. Investment in recycling, reusing and repairing used raw materials and products will create more jobs, save billions of dollars' worth of imports and help to mitigate climate change, the paper argues, echoing points Chatham House made in a research paper in 2017.

That makes it a win-win for developing countries looking to develop their economies and pull more people out of poverty. Circular Economy Hotspots as catalysts for circular transitioning. Business as usual is not an option We, as a planet, are facing some major challenges today. 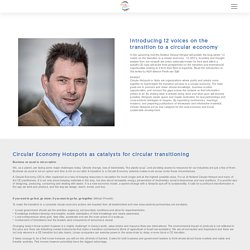 Dare to declare capitalism dead – before it takes us all down with it. For most of my adult life I’ve railed against “corporate capitalism”, “consumer capitalism” and “crony capitalism”. It took me a long time to see that the problem is not the adjective but the noun. While some people have rejected capitalism gladly and swiftly, I’ve done so slowly and reluctantly. Part of the reason was that I could see no clear alternative: unlike some anti-capitalists, I have never been an enthusiast for state communism. I was also inhibited by its religious status. To say “capitalism is failing” in the 21st century is like saying “God is dead” in the 19th: it is secular blasphemy.

But as I’ve grown older, I’ve come to recognise two things. Capitalism’s failures arise from two of its defining elements. Those who defend capitalism argue that, as consumption switches from goods to services, economic growth can be decoupled from the use of material resources. World needs to move away from neoliberal model, says President. The world needs to move away from the prevailing neo-liberal economic model to one linking ecology, economy and society if humankind is to successfully address climate change, according to President Michael D Higgins. 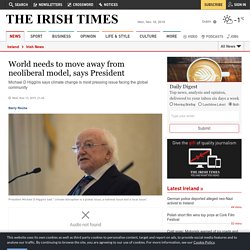 The President said climate change is the most pressing issue facing people as a global community and the window of opportunity to act and address it in a meaningful way is closing at a worryingly fast rate. Speaking in Cork City Hall, where he addressed a Conference on Intergenerational Climate Justice, Mr Higgins said “climate disruption is a global issue, a national issue and a local issue”. Tracing the origins of the current crisis back to the start of the Industrial Revolution, President Higgins said increasing consumption was having a huge impact on natural resources. “The impacts on the Earth’s dwindling natural resources are now all too apparent - rapidly declining biodiversity and accelerating climate change impacts brought about by global warming,” he said. 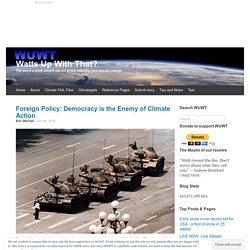 Willie Soon; According to Foreign Policy, moving “beyond Democracy” towards an authoritarian Chinese system would allow governments to override the climate obstructionism of older voters, but they have concerns about the societal disruption the transition to authoritarianism would cause. DEMOCRACY IS THE PLANET’S BIGGEST ENEMYYoung people care a lot about climate change—but most of them can’t vote. Here’s how governments can adapt to accommodate them.BY DAVID RUNCIMANJULY 20, 2019In today’s Britain, a rare public figure can bring together Brexiteers and Remainers, Conservatives and Labour. Yet the teenage climate activist Greta Thunberg did just that on a visit to London in April, when she was feted by British politicians from across the political spectrum. Nationalism "Threatens To Undermine” Sustainability Progress. A rise in nationalism around the world “threatens to undermine progress in sustainability”, while climate change itself may fuel nationalist politics for years to come, according to a new report. 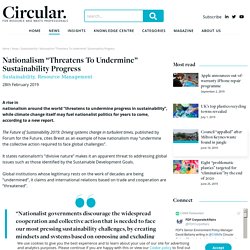 The Future of Sustainability 2019: Driving systems change in turbulent times, published by Forum for the Future, cites Brexit as an example of how nationalism may “undermine the collective action required to face global challenges”. It states nationalism’s “divisive nature” makes it an apparent threat to addressing global issues such as those identified by the Sustainable Development Goals. Global institutions whose legitimacy rests on the work of decades are being “undermined”, it claims and international relations based on trade and cooperation are “threatened”. Democratic ownership. Policies and solutions. Change The Rules. Change The Rules. Change The Rules. New rules for the economy. The UK is in the grip of three intense, interlinked crises: an economic crisis, an ecological crisis and a democratic crisis. 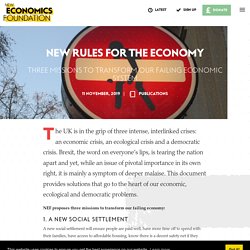 Brexit, the word on everyone’s lips, is tearing the nation apart and yet, while an issue of pivotal importance in its own right, it is mainly a symptom of deeper malaise. This document provides solutions that go to the heart of our economic, ecological and democratic problems. NEF proposes three missions to transform our failing economy: A new social settlement will ensure people are paid well, have more time off to spend with their families, have access to affordable housing, know there is a decent safety net if they need one, and are provided with a high level of care throughout their lives. 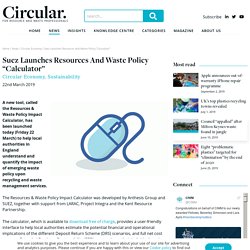 The Resources & Waste Policy Impact Calculator was developed by Anthesis Group and SUEZ, together with support from LARAC, Project Integra and the Kent Resource Partnership. The calculator, which is available to download free of charge, provides a user-friendly interface to help local authorities estimate the potential financial and operational implications of the different Deposit Return Scheme (DRS) scenarios, and full net cost recovery Extended Producer Responsibility (EPR) proposals, on their individual services.

A major shake-up of producer responsibility and recycling and waste collection systems has been proposed by Government as part of its recent Resources & Waste Strategy. SUEZ - Policy Impact Calculator.