The green Pope: how religion can do economics a favour. Palpable shock met Tuesday’s news of the Pope’s unequivocal and outspoken intervention in the debate on climate change and global inequality. 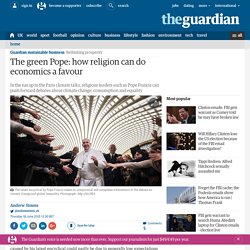 The stir caused by his latest encyclical could partly be due to generally low expectations of the Catholic Church following years of relentless, negative scandal. But we shouldn’t be surprised. The world’s major religions all have economic teachings that apply to how we treat the planet and each other, and which often starkly contradict orthodox economic models. Modern economics views itself as value free, but that wasn’t always the case and the major faiths all view economic prosperity through a moral lens. If that makes business leaders or economists squirm, it’s worth remembering that the grandfather of market economics, Adam Smith, wrote about The Theory of Moral Sentiments.

On this, the Catholic Church has form. Schumacher wrote a famous paper on Buddhist economics in which he accused economists of suffering from “metaphysical blindness”. Sustainability and Catholic Social Thought. I. 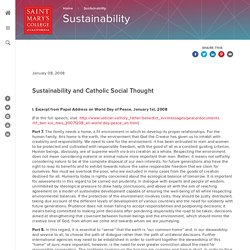 Excerpt from Papal Address on World Day of Peace, January 1st, 2008 (For the full speech, visit: Part 7. The family needs a home, a fit environment in which to develop its proper relationships. Sustainability Update. By Hank Boerner – Chairman, G&A Institute Imagine the impact — the power of the organizational resources directed at climate change issues — as the global Roman Catholic Church focuses on the issues. 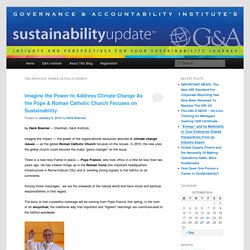 In 2915, the new year, the global church could become the major “game changer” on the issue. There is a new Holy Father in place — Pope Francis, who took office in a little bit less than two years ago. He has shaken things up in the Roman Curia (the important headquarters infrastructure in Rome/Vatican City) and is sending strong signals to the faithful on all continents. Among those messages: we are the stewards of the natural world and have moral and spiritual responsibilities in that regard. The buzz is that a powerful message will be coming from Pope Francis this spring, in the form of an encyclical, the traditional way that important and “highest” teachings are communicated to the faithful worldwide.

Photo: USCCB Ms. He was trained as a chemical technician in his homeland, Argentina. EconomicStimulusandEconomicGrowthStatement. Titled. 0410 gpd beyond. The Relationship between Economic Growth and Sustainability. Even when more exacting definitions of sustainable development are offered, confusion still persists because of honest scientific disputes and uncertainties about the facts, and differing opinions about how economies adapt over time to changing resource constraints. 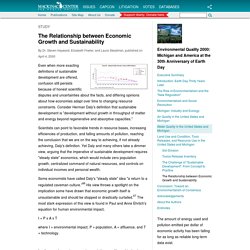 Consider Herman Daly's definition that sustainable development is "development without growth in throughput of matter and energy beyond regenerative and absorptive capacities. " Scientists can point to favorable trends in resource bases, increasing efficiencies of production, and falling amounts of pollution, reaching the conclusion that we are on the way to achieving, if not already achieving, Daly's definition.

Yet Daly and many others take a dimmer view, arguing that the imperative of sustainable development requires "steady state" economics, which would include zero population growth, centralized command of natural resources, and controls on individual incomes and personal wealth. I = P x A x T. Trade policy review - Argentina 2007. The following documents are available in MS Word format. 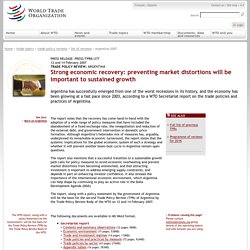 Secretariat report > Contents and summary observations (12 pages, 98KB) > Economic environment (15 pages, 538KB) > Trade and investment regimes (14 pages, 118KB) > Trade policies and practices by measure (72 pages, 924KB) > Trade policies by sector (43 pages, 276KB) > Appendix tables (16 pages, 783KB) Government report (41 pages, 1464KB) Revisions and Corrigenda of the above documents may be issued approximately 2 weeks after the meeting. Chairperson's concluding remarks Minutes of the meeting are available approximately 6 weeks after the meeting. Questions and answers by WTO Members are available approximately 6 weeks after the meeting. Note back to top Trade Policy Reviews are an exercise, mandated in the WTO agreements, in which member countries’ trade and related policies are examined and evaluated at regular intervals. World Summit on Sustainable Development. 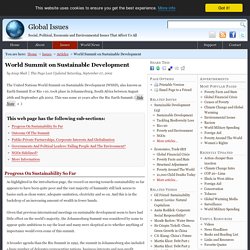 This was some 10 years after the Rio Earth Summit. (Side Note»There was another United Nations conference on the environment in Stockholm, 1972. This would then make the current one Earth Summit III!) Progress on Sustainability so far As highlighted in the introduction page, the record on moving towards sustainability so far appears to have been quite poor and the vast majority of humanity still lack access to basics such as clean water, adequate sanitation, electricity and so on.

A broader agenda than the Rio Summit in 1992, the summit in Johannesburg also included a huge number of delegates representing nations, business interests and non-profit environmental and development/citizen/social justice groups. Home.