Necromantic Alchemical Marriage. This is the Cookie Policy for Supernatural Spirit, accessible from What Are Cookies As is common practice with almost all professional websites this site uses cookies, which are tiny files that are downloaded to your computer, to improve your experience. 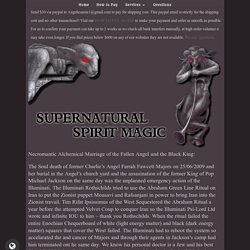 This page describes what information they gather, how we use it and why we sometimes need to store these cookies. We will also share how you can prevent these cookies from being stored however this may downgrade or 'break' certain elements of the sites functionality. For more general information on cookies see the Wikipedia article on HTTP Cookies. How We Use Cookies We use cookies for a variety of reasons detailed below. Disabling Cookies. DRAUGADRÓTTINN: Lord Of The Undead — Advanced Vampire Magick. (5) DESCENDED MASTERS — The Discarnate Lords Of Death Magick.

DEATH MAGICK — To Master Life, You Need To Master Death. The Necromancer : Path Of The Descended Masters - My New Necromantic Grimoire. COMPLETE SPIRICOM TECH MANUAL searchable. (27) YOUR DEAD NAME - Azrael’s Teaching On The Dead Name (Necromancy) The Most Evil Grimoire Of Necromancy. The Voices of Demons: The True History of The Necronomicon. Necronomicon ex Mortis.

(1) 47 - Deconstructing the Chimera Break down the Transplutonian Entity..flv. (6) THE CALL OF CTHULHU: Have The Old Ones Called You? Gatewalking in the Necronomicon: Is It Authentic?, Part 1. The Gift of Gatewalking. Introduction To Tulpamancy Series. The 50 Names. Using the Spellbook. Tumblr. Through the Gates of the Silver Key. The Silver Key (www.redhorsewebdesign.com) This will be the last article for “Through the Gates of the Silver Key” written by H.P. 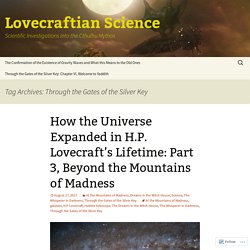 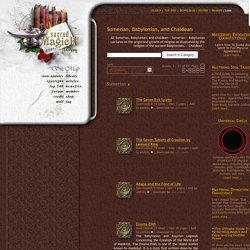 Babylonian ▲ * These documents are provided for information and research purposes only. Buy from Amazon: Mesopotamian Magic, Rites and Rituals of Eridu, Sumerian Anunnaki in Babylonian System. Sumerian Dictionary. Necronomicon by Simon - The Book of Fifty Names. THIS is the Book of MARDUK, begotten of our Master ENKI, Lord of Magicians, who did defeat TIAMAT, known as KUR, known as HUWAWA, in magick combat, who defeated the Ancient Ones that the Elders may live and rule the Earth.

In the time before time, in the age before the heaven and the earth were put in their places, in the age when the Ancient Ones were rulers of all that existed and did not exist, there was nought but darkness. There was no Moon. There was no Sun. No planets were they, and no stars. No grain, No tree, no plant grew. What is the relationship between Dr. John Dee and the Necronomicon? The Necronomicon is the rarest and most terrible of the magical grimoires.

According to New England horror writer Howard Philip Lovecraft, the Necronomicon was "Composed by Abdul Al-Hazred, a mad poet of Sanaa, in Yemen, who is said to have flourished during the period of the Ommiade caliphs, circa 700 A.D. He visited the ruins of Babylon and the subterranean secrets of Memphis and spent ten years alone in the great southern desert of Arabia - the Roba al Khaliyeh, or "Empty Space" of the ancients and "Dahma" or "Crimson" desert of the modern Arabs, which is held to be inhabited by protective evil spirits and monsters of death. Of this desert many strange and unbelievable marvels are told by those who pretend to have penetrated it.

In his last years, Al-Hazred dwelt in Damascus, where the Necronomicon (Al Azif) was written, and of his final death or disappearance (738 A.D.) many terrible and conflicting things are told. " This is not an implausible suggestion. After tempting Eve 20. Hay ? The Necronomicon Anti-FAQ. Each thing evokes its opposite Kendrick's Nemesis Reasons are dried gripes Index Q.

Sumerian. An Introduction to the Sumerian Language [Note: Want to skip the intro and get straight to the lessons?] 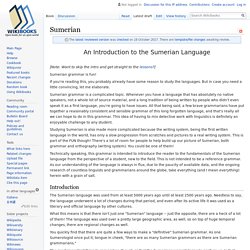 Sumerian grammar is fun! If you're reading this, you probably already have some reason to study the languages. But in case you need a little convincing, let me elaborate. Sumerian grammar is a complicated topic. Studying Sumerian is also made more complicated because the writing system, being the first written language in the world, has only a slow progression from scratches and pictures to a real writing system. My Personal Experience With The NECRONOMICON Occult Book. Necronomicon The Best Weird Tales of HP Lovecraft Audiobook Part 1 Low, 480x360p.