17-year-old wins 100k for creating cancer-killing nanoparticle. At the age of 17 I was paying attention in college, but still enjoying the student life as much as studying towards my career goals. 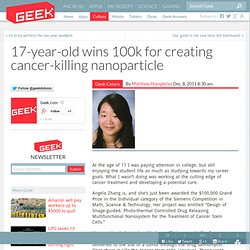 What I wasn’t doing was working at the cutting edge of cancer treatment and developing a potential cure. Angela Zhang is, and she’s just been awarded the $100,000 Grand Prize in the Individual category of the Siemens Competition in Math, Science & Technology. Her project was entitled “Design of Image-guided, Photo-thermal Controlled Drug Releasing Multifunctional Nanosystem for the Treatment of Cancer Stem Cells.” Her creation is being heralded as a “Swiss army knife of cancer treatment.” Zhang managed to develop a nanoparticle that can be delivered to the site of a tumor through the drug salinomycin. As to why she chose this as her project, Zhang explains that she was surprised when looking at the survival rates of patients receiving cancer treatment. From fireflies to superbugs…. Sciblogs Events.

Study Finds the Key to Language: How Humans Form Sentences. Experiments with dogs, chimpanzees and other intelligent animals show that humans aren't the only beings who are able to learn the meanings of words. 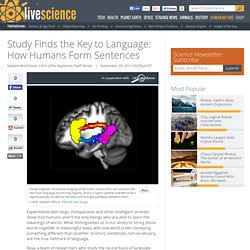 What distinguishes us is our ability to string those words together in meaningful ways, with one word order conveying something different than another. In short, sentences, not vocabulary, are the true hallmark of language. Now, a team of researchers who study the neural basis of language have pinpointed the pathway in the brain that allows humans to combine words together into sentences.

It's a separate pathway than the one we use to recall the meanings of individual words, a capability we share with other animals. Neuron - Syntactic Processing Depends on Dorsal Language Tracts. To view the full text, please login as a subscribed user or purchase a subscription. 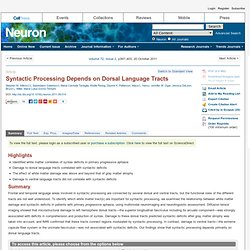 Click here to view the full text on ScienceDirect. Figure 1 Dorsal and Ventral Language Tracts (A–C) Seed ROIs for a single individual (n.b. this was a patient diagnosed with nonfluent PPA). (A) The SLF/Arcuate was seeded from ROIs drawn on a coronal slice posterior to the postcentral gyrus, in the anterior-posteriorly oriented white matter lateral to the corona radiata. (D–F) The three tracts of interest in representative patients with nonfluent (D), semantic (E), and logopenic (F) variant PPA. (G) Probability maps for the three tracts of interests in all 27 patients. Figure 2 Relationships between Tract Integrity and Syntactic Measures Reduced FA in the left SLF/Arcuate was associated with deficits in syntactic comprehension (A) and production (B). 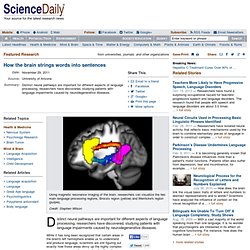 While it has long been recognized that certain areas in the brain's left hemisphere enable us to understand and produce language, scientists are still figuring out exactly how those areas divvy up the highly complex processes necessary to comprehend and produce language. Advances in brain imaging made within the last 10 years have revealed that highly complex cognitive tasks such as language processing rely not only on particular regions of the cerebral cortex, but also on the white matter fiber pathways that connect them. Two brain areas called Broca's region and Wernicke's region serve as the main computing hubs underlying language processing, with dense bundles of nerve fibers linking the two, much like fiber optic cables connecting computer servers.

Monster Black Holes Are Most Massive Ever Discovered. Scientists have discovered the largest black holes yet, and they're far bigger than researchers expected based on the galaxies in which they were found. 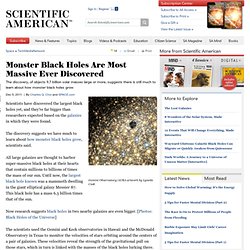 The discovery suggests we have much to learn about how monster black holes grow, scientists said. All large galaxies are thought to harbor super-massive black holes at their hearts that contain millions to billions of times the mass of our sun. Until now, the largest black hole known was a mammoth dwelling in the giant elliptical galaxy Messier 87. This black hole has a mass 6.3 billion times that of the sun.

Now research suggests black holes in two nearby galaxies are even bigger.