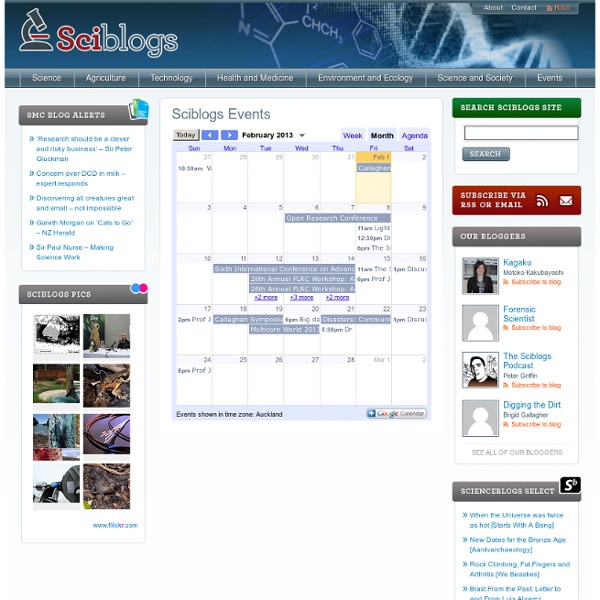 Neuron - Syntactic Processing Depends on Dorsal Language Tracts To view the full text, please login as a subscribed user or purchase a subscription. Click here to view the full text on ScienceDirect. Figure 1 Public perceptions of NZ’s freshwater environment By Daniel Collins As much as Waiology is about conveying science to the public and fellow water professionals, it’s also valuable for us all to understand how New Zealanders perceive our freshwaters and freshwater management. Excellent insight into this is provided by a biennial report from Ken Hughey and colleagues at Lincoln University. The 2010 report covers the environment in general, but has given special treatment to freshwater.

Science communication potpourri Over the past few days I’ve been following ScienceOnline2012, mostly via twitter. The agenda for the meeting can be found in the wiki pages. Below I’ve gathered a small sampling of items that might be of interest or value to others who have an interest in science communication. How a Computer Game is Reinventing the Science of Expertise [Video] A crowd observes the match playing on the main stage at the StarCraft 2 championships in Providence, RI. Credit: Major League Gaming If there is one general rule about the limitations of the human mind, it is that we are terrible at multitasking. The old phrase “united we stand, divided we fall” applies equally well to the mechanisms of attention as it does to a patriotic cause.

The (supposed) myth of the 8-hour sleep Last week a sleep colleague and I gave a presentation to a group of GPs. It was one of those slightly disorganised things where you know what you’re presenting but not a great deal about anyone else’s presentation. Our introduction by a GP colleague of ours gave a light-hearted overview of the importance of sleep… including a recent discovery that our belief that we need 8 hours sleep was a myth. I felt slightly panicked at this suggestion. In most part because I couldn’t believe I had missed a news story this big.

How the brain strings words into sentences Distinct neural pathways are important for different aspects of language processing, researchers have discovered, studying patients with language impairments caused by neurodegenerative diseases. While it has long been recognized that certain areas in the brain's left hemisphere enable us to understand and produce language, scientists are still figuring out exactly how those areas divvy up the highly complex processes necessary to comprehend and produce language. Advances in brain imaging made within the last 10 years have revealed that highly complex cognitive tasks such as language processing rely not only on particular regions of the cerebral cortex, but also on the white matter fiber pathways that connect them. Two brain areas called Broca's region and Wernicke's region serve as the main computing hubs underlying language processing, with dense bundles of nerve fibers linking the two, much like fiber optic cables connecting computer servers.

IAS Complaint Part 2: Gardasil Horrors – Horrific Reasoning Continuing my series of extracts from the IAS charity complaint. This one focuses on the Gardasil vaccine and the paranoia that has arisen around it. I have included a link to the article but for convenience I have reproduced here the parts that I refer to in the complaint.

Citizen Science – Globe at Night Ah, citizen science. How we love you so :) For those not familiar with the concept, citizen science is what we call distributed science projects in which members of the public contribute to the science being done: they help collect the data, for example, or analyse it. Examples include Galaxy Zoo, as well as a host of others. And now there’s a beautiful new project in which to get involved, and it’s far from time-heavy: Globe at Night.

Why don’t we have a cure for AIDS yet? Last week I came across this article which describes how the number of people living with AIDS has increased due to better access to drugs which fight HIV. A fairly reasonable article … But then I made the mistake of reading some of the comments (I know, I know, I should know better) where several misconceived and ill informed opinions were circulating including the suggestion that drug companies are not interested in finding a cure – rather they are only interested in drugs that prolong life so they could profit over long periods of time. While I can understand that such misguided views could easily arise from the frustration at the perceived slow progress of science, and the fact that pharmaceutical companies have a less than pure reputation, the real reason why a cure has not been found is due to the complexity of the science involved. 1) Virus reservoirs

Truth or lie? Can MRI help scientists read our minds? By Dr Donna Rose Addis, Centre for Brain Research, University of Auckland It’s the slogan of a new game show on TV3, but can science help us tell the two apart? Mind Reading has always been thought of as a superhuman skill, but fMRI technology is bringing us ever closer to this goal. So-called ‘functional Magnetic Resonance Imaging’ tracks blood oxygen levels across the brain, allowing scientists to visualise what brain regions ‘light up’ during different types of cognition. Of course this is an indirect measure, as we assume that the more oxygen a brain area consumes, the more it is doing — as thinking is hungry work!

17-year-old wins 100k for creating cancer-killing nanoparticle At the age of 17 I was paying attention in college, but still enjoying the student life as much as studying towards my career goals. What I wasn’t doing was working at the cutting edge of cancer treatment and developing a potential cure. Angela Zhang is, and she’s just been awarded the $100,000 Grand Prize in the Individual category of the Siemens Competition in Math, Science & Technology. Her project was entitled “Design of Image-guided, Photo-thermal Controlled Drug Releasing Multifunctional Nanosystem for the Treatment of Cancer Stem Cells.” Her creation is being heralded as a “Swiss army knife of cancer treatment.”

IAS Complaint Part 3: Vaccine ingredients – Not so bad really Next up in our voyage of crank discovery, via extracts from my IAS charity complaint, is a breakdown of simplistic reasoning around vaccine ingredients. Again, I have reproduced elements of the original article here for your convenience. The following example was posted as a look at vaccine ingredients in two parts. I will not be so lenient – Both in one for you.