Why I doubted Facebook could build a billion dollar business, and what I learned from being horribly wrong. Facebook, early 2006Sometimes, you need to be horribly, embarrassingly wrong to remind yourself to keep an open mind. 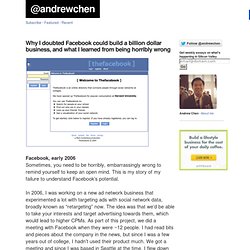 This is my story of my failure to understand Facebook’s potential. In 2006, I was working on a new ad network business that experimented a lot with targeting ads with social network data, broadly known as “retargeting” now. The idea was that we’d be able to take your interests and target advertising towards them, which would lead to higher CPMs. As part of this project, we did a meeting with Facebook when they were ~12 people. I had read bits and pieces about the company in the news, but since I was a few years out of college, I hadn’t used their product much. We met the Facebook team at their office right next to the Sushitomo on University Ave.

Ultimately, we didn’t get to work with them though we did eventually sign 1000s of publishers including MySpace, AOL, Wall St. Facebook was growing fast- very fast, and impressively handled by a super young team (like me!) How to create a profitable Freemium startup (spreadsheet model i. Click to download Freemium spreadsheetBackground on this discussion Last year, the stupendous Daniel James co-hosted a talk with me on Lifetime Value metrics for subscription and virtual goods-based items. 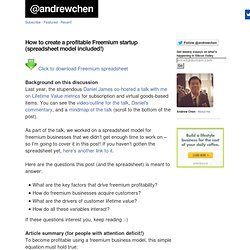 You can see the video/outline for the talk, Daniel’s commentary, and a mindmap of the talk (scroll to the bottom of the post). As part of the talk, we worked on a spreadsheet model for freemium businesses that we didn’t get enough time to work on – so I’m going to cover it in this post! If you haven’t gotten the spreadsheet yet, here’s another link to it. Here are the questions this post (and the spreadsheet) is meant to answer: What are the key factors that drive freemium profitability?

If these questions interest you, keep reading :-) Article summary (for people with attention deficit!) Lifetime value > Cost per acquisition + Cost of service (paying & free) There are lots of different factors that influence profitability, including: Now for all the gory details… LTV = 1/(1-R) * rev. Todd Sattersten. I published Fixed to Flexible on Tuesday. 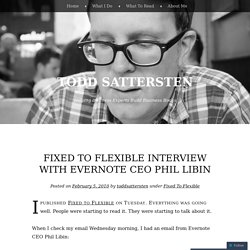 Everything was going well. People were starting to read it. They were starting to talk about it. When I check my email Wednesday morning, I had an email from Evernote CEO Phil Libin: Just read your ebook. Ugh. I asked Phil if he would help me clean up the math and answer a few questions about the company. Todd: So, I seem to have messed up the math a little. Phil: It was my fault for being confusing. I ran the numbers from January 2010. The gross margin increases every month because revenue per user grows (conversion rates go up because long-time users are more likely to convert) while variable expenses per user decline (Moore’s law + efficiencies of scale). There are other sources of revenue (as well as fixed expenses), but they don’t move around much, so the gross margin is by far the most important factor. T: What other factors need to be taken into account? P: There are many other factors, enough to fill a book. P: You’re probably right. What are typical Key Perfomance Indicators for a web product.

Evernote's model. Evernote, the multi-platform app that lets you capture notes, audio and images when you are on the go, and then access those mementos wherever you want to next, has carved out a position as one of the more consistently useful services out there for smartphone consumers. 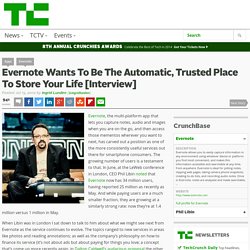 The growing number of users is a testament to that. In June, at the LeWeb conference in London, CEO Phil Libin noted that Evernote now has 34 million users, having reported 25 million as recently as May. And while paying users are a much smaller fraction, they are growing at a similarly strong rate: now they’re at 1.4 million versus 1 million in May. When Libin was in London I sat down to talk to him about what we might see next from Evernote as the service continues to evolve. TC: You mentioned on stage that you thought images were an important part of the kind of data you wanted to associate with Evernote (in your lifetime and beyond storage ambition), but you wouldn’t build the “next Instagram.”