FCE: 10 Vocabulary Revision Games - ELT Connect. Prepare your students for their FCE exam with these 10 vocabulary revisions games. Preposition Pelmanism Write 20 (Or more/less if you want) verbs or words that have a dependent preposition on cards. Write 20 prepositions on cards.Put the cards face down on the table, the prepositions on one side, the verbs on the other.Students must choose 1 card from each pile. They must decide if the word and preposition go together and then give a definition of the word. The rest of the group should decide if it is correct. If they are correct they keep the cards.If they are incorrect or the verb and preposition don’t form a phrasal verb, the cards should be put back on the table. Write half a collocation on 1 post it and half on the other. Learn Languages with Music Videos, Lyrics and Karaoke! 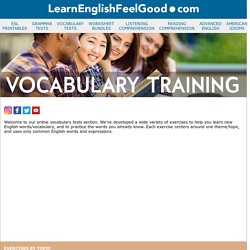 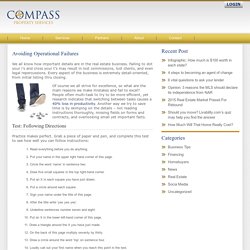 Failing to dot your i’s and cross your t’s may result in lost commissions, lost clients, and even legal repercussions. Every aspect of the business is extremely detail-oriented, from initial listing thru closing. Of course we all strive for excellence, so what are the main reasons we make mistakes and fail to excel? People often multi-task to try to be more efficient, yet research indicates that switching between tasks causes a 40% loss in productivity. Another way we try to save time is by skimping on the details – not reading instructions thoroughly, missing fields on forms and contracts, and overlooking small yet important facts.

Spelling Matters. Cool english interactive english learning material, esl or efl. Roadtrippers - Maps Built for Travelers. IDIOMS IN CLOSE-UP. One Reddit user has recently discovered a miniature world inside an old bottle while he was cleaning his yard. 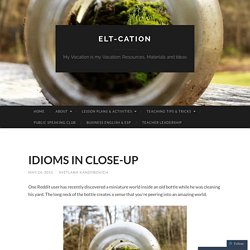 The long neck of the bottle creates a sense that you’re peering into an amazing world. Image credit: photograph by kidgalaxy on reddit At times, finding a hidden world is a matter of whether we actually bother peering inside of what appears to be an old beer bottle. English Idioms Interactive. Bike Project. Central London Hotel Draws Harry Potter Fans With "Wizard Chambers"

Though the last book of the spectacular Harry Potter series was released seven years ago in 2007, the young wizard continues to be extremely popular with both kids and adults. 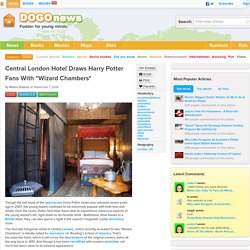 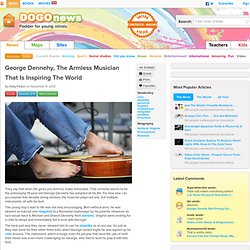 That certainly seems to be the philosophy 19-year-old George Dennehy has adopted all his life. For how else can you explain that despite being armless, the musician plays not one, but multiple instruments, all with his feet. The young boy's start to life was not very encouraging. Born without arms, he was labeled an outcast and relegated to a Romanian orphanage by his parents. However as luck would have it, Michael and Sharon Dennehy from Ashland, Virginia were looking for a child to adopt and immediately fell in love with George! The best part was they never allowed him to use his disability as an excuse.

But thanks to his tenacious music teacher that learned to play the instrument with her feet so that she could teach the young boy, George not only mastered the cello, but also realized that he had a passion and talent for music. As he grew older, Dennehy began uploading his 'performances' on YouTube. Italian Man Single-Handedly Builds Giant Amusement Park. By Meera Dolasia on November 7, 2013 NCSS-3Grades: 3-8Word Search About forty years ago, an Italian man by the name of Bruno decided to start a restaurant or Osteria in the middle of the forest near Treviso, Italy. 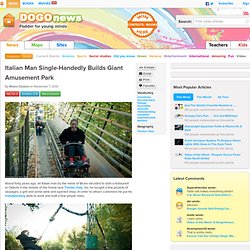 So, he bought a few pounds of sausages, a grill and some wine and opened shop. In order to attract customers he put his metalworking skills to work and built a few simple rides. Today, that outdoor Osteria has transformed into a restaurant called Ai Pioppi that sits 500 and the simple rides have morphed into a sophisticated full-fledged amusement park.

Untitled. Choose a city. Choose a city Submitted by admin on 15 September, 2010 - 11:54 In this speaking activity students think about and discuss a city they would like to live in for a year. 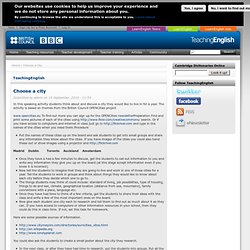 The activity is based on themes from the British Council OPENCities project www.opencities.eu To find out more you can sign up for the OPENCities newsletterPreparation Find and print some pictures of each of the cities using search. Or if you have access to computers and internet in class just go to and type in the names of the cities when you need them.Procedure Put the names of these cities up on the board and ask students to get into small groups and share any information they know about the cities. Madrid Dublin Toronto Auckland Amsterdam Here are some possible sources of information. Collocations Lists. Vocabulary Index. 50 Best Things About Summer. Meet Tippi - The Real-Life Mowgli. By Meera Dolasia on June 14, 2013 CCSSGrades: K-5Word Search When Rudyard Kipling created the character of Mowgli, an orphaned boy who was adopted and raised by wolves in the forests of India, he would have never guessed that one day there would be a child that would actually live a similar life. 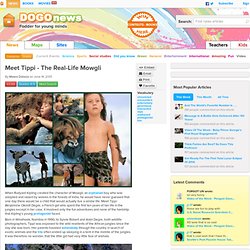 Meet Tippi Benjamine Okanti Degre, a French girl who spent the first ten years of her life in the jungles except in her case, it involved only the fun adventures and none of the hardship that Kipling's young protagonist faced. Born in Windhoek, Namibia in 1990, to Sylvie Robert and Alain Degre, both wildlife photographers, Tippi was exposed to the wild residents of the African jungles since the day she was born. Her parents traveled extensively through the country in search of exotic animals and the trio often ended up sleeping in a tent in the middle of the jungles. Resources: Dailymail.co.uk, Telegraph.co.uk. Confusing words – A – D game. 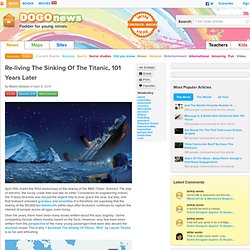 Dubbed 'The ship of dreams', the luxury cruise liner was like no other. Considered an engineering marvel, the 11-story structure was not just the largest ship to ever grace the seas, but also, one that featured unrivaled grandeur and amenities. It is therefore not surprising that the sinking of the 50,000-ton behemoth within days after its launch, continues to capture the interest of people across all ages, even today. Over the years, there have been many books written about this epic tragedy - Some completely factual, others loosely based on the facts. However, very few have been written from the perspective of the many young passengers that were also aboard the doomed vessel. Virtual School / Listening Materials. Adjectives Synonyms ESL Matching Activity, Connector Game. Adjectives, Extreme Form, ESL Vocabulary Interactive Activity Online. Used to/ Be used to/ get used to.

Here are some exercises: This next one is from BBC English. 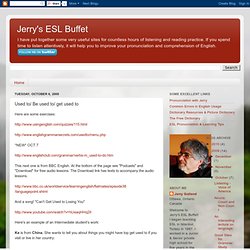 At the bottom of the page see "Podcasts" and "Download" for free audio lessons. The Download link has texts to accompany the audio lessons. And a song! "Can't Get Used to Losing You" Here's an example of an Intermediate student's work: Ke is from China. What will people who are thinking of living in my country have to get used to? Video Of The Week - 'Ghost' Magician Pranks Drive Thru Staff. By Meera Dolasia on January 14, 2013 CCSSWord Search The drive-thru window of a fast-food restaurant is probably the least fun place to work at - All the staff do is open the window, dish out bags of food to someone they cannot even fully see, say something polite and then wait for the next car to drive up! But what if a car drove up with nobody at the wheel? That, is what some poor workers had to encounter recently, thanks to prankster and magician, Rahat!

Donning a 'car-seat' costume that made it appear as though the car was 'driver-less' the Virginia resident pulled up at the windows of several local fast food restaurants to pick up his food. Lufthansa to Europe: Virtual Pilot! General Tso's Spicy Digraphs. Text Instructions Have you ever had General Tso’s Chicken? If so, have you ever considered exactly who is General Tso? Believe it or not, General Tso was a famous chef who had an obsession with synonyms. Practise your English with our Academy Island game! Level 1 Mid-Level Test - Interactive English. Lower Intermediate Mid-Level Test - Interactive English. Green: More Than Just a Color. LearnEnglishTeens.