Five innovations that will define tech in 2013. How can big data and smart analytics tools ignite growth for your company? 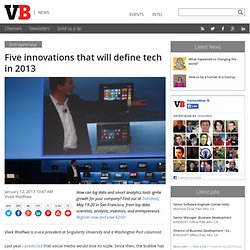 Find out at DataBeat, May 19-20 in San Francisco, from top data scientists, analysts, investors, and entrepreneurs. Register now and save $200! Vivek Wadhwa is a vice president at Singularity University and a Washington Post columnist. Last year I predicted that social media would lose its sizzle. Since then, the bubble has burst for companies such as Facebook, Zynga and Groupon. I am glad to have been wrong about LinkedIn. So, what else lies ahead for 2013? Most recently, the big rewards have gone to startups developing relatively simple social media platforms and applications. Here are the big innovation trends that I believe will gain traction in 2013.

Tablet explosion to computing revolution Apple currently owns the high end of the market, of course, and I don’t expect cheap tablets to put any dent in the company’s sales this year. The ‘quantified self’ goes mainstream and creates a new regulatory battlefield. Blog of the International Network for Small and Medium Sized Enterprises (INSME) - by Amir Raveh - Back in 2006 a British VC investor had told me that he decided not to invest in a social project called Facebook. 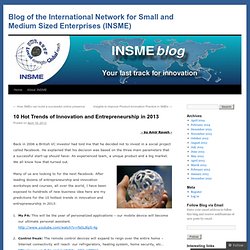 He explained that his decision was based on the three main parameters that a successful start-up should have: An experienced team, a unique product and a big market. We all know how that turned out. Many of us are looking to for the next Facebook. IBM creates new foundation to program SyNAPSE chips inspired by human brain. Instrumented Bodies gives music and dance some backbone. For the last three years, a small research team at McGill University has been working with a choreographer, a composer, dancers and musicians on a project named Instrumented Bodies. 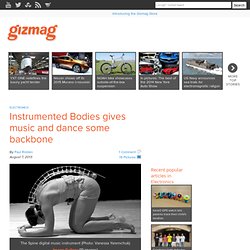 Three groups of sensor-packed, internally-lit digital music controllers that attach to a dancer's costume have been developed, each capable of wirelessly triggering synthesized music as the performer moves around the stage. Sounds are produced by tapping or stroking transparent Ribs or Visors, or by twisting, turning or moving Spines.

Though work on the project continues, the instruments have already been used in a performance piece called Les Gestes which toured Canada and Europe during March and April. View all. 5 Trends That Will Drive The Future Of Technology. THE FACT WORLD: 10 Modern Devices That Will Change Our Lives. 10 Modern Devices That Will Change Our Lives Many believe that we are now experiencing the most intense technological revolution of all time, and that we are transitioning into a High Technology Age, where new advancements will make previous models extinct. 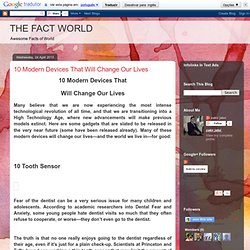 Here are some gadgets that are slated to be released in the very near future (some have been released already). Many of these modern devices will change our lives—and the world we live in—for good: 10 Tooth Sensor Fear of the dentist can be a very serious issue for many children and adolescents. The truth is that no one really enjoys going to the dentist regardless of their age, even if it’s just for a plain check-up.

The sensor will alert you when it detects any bacteria that could cause cavities, plaque buildup, or any other infections—in this way you’ll be able to prevent a major problem, and thereby avoid the dentist’s office. 9 Wing Roller Coasters Welcome to the future of fun and entertainment. 8 Oculus Rift 7 Parallels 6 The 4K TVs. Fascinatingpics : 1993 vs 2013... Survival of the ... Nicest? Check Out the Other Theory of Evolution by Eric Michael Johnson. A new theory of human origins says cooperation—not competition—is instinctive. posted May 03, 2013 A century ago, industrialists like Andrew Carnegie believed that Darwin’s theories justified an economy of vicious competition and inequality. 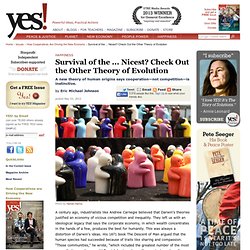 They left us with an ideological legacy that says the corporate economy, in which wealth concentrates in the hands of a few, produces the best for humanity. This was always a distortion of Darwin’s ideas. His 1871 book The Descent of Man argued that the human species had succeeded because of traits like sharing and compassion. Nearly 150 years later, modern science has verified Darwin’s early insights with direct implications for how we do business in our society. Tomasello holds that there were two key steps that led to humans’ unique form of interdependence. 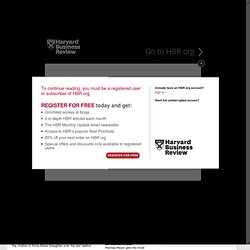 For a long time. So why does it seem like we’ve only now reached a dull roar on these issues — maybe even what some are calling the rise of “executive feminism”? And can we see signals in the noise? To explain the sudden surge of discussion on this topic, look to the magic of three: Marissa Mayer, Sheryl Sandberg, and Anne-Marie Slaughter. Would any one of these women been sufficient to jump-start the conversation on their own? To get a sense of the scale of the conversation that these women have launched, we monitored the billions of conversations that occur in real-time on social media through the NetBase platform. 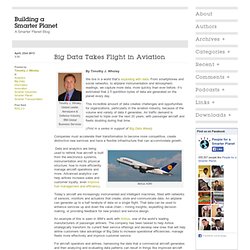 Wholey, Global Leader, Aerospace & Defense Industry, IBM Global Business Services By Timothy J. Wholey We live in a world that’s exploding with data. From smartphones and social networks, to airplane instrumentation and atmospheric readings, we capture more data, more quickly than ever before. This incredible amount of data creates challenges and opportunities for organizations, particularly in the aviation industry, because of the volume and variety of data it generates. First in a series in support of Big Data Week) Companies must accelerate their transformation to become more competitive, create distinctive new services and have a flexible infrastructure that can accommodate growth. Airbus A380 Data and analytics are being used to rethink how aircraft is built from the electronics systems, instrumentation and its physical structure; how to more efficiently manage aircraft operations and more.

Related:  5 Trends That Will Drive The Future Of Technology   -  Education   -  Enterprise