Ireland, so green, so beautiful, but also a country that went from being one of the poorest in Europe to one of the richest. How did it come to that? Let's have a look.

Ireland and EU intro. How Powerful Is Ireland? Geography Now! Ireland. Ireland in the EU. Joining the European Community However, Europe wasn’t so sure. 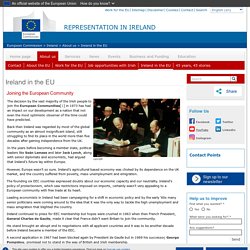 Ireland’s agricultural based economy was choked by its dependence on the UK market, and the country suffered from poverty, mass unemployment and emigration. The founding six EEC countries expressed doubts about our economic capacity and our neutrality. Ireland’s policy of protectionism, which saw restrictions imposed on imports, certainly wasn’t very appealing to a European community with free trade at its heart. Leading economists in Ireland had been campaigning for a shift in economic policy and by the early ‘60s many senior politicians were coming around to the idea that it was the only way to tackle the high unemployment and mass emigration that blighted the country. Ireland continued to press for EEC membership but hopes were crushed in 1963 when then French President, General Charles de Gaulle, made it clear that France didn’t want Britain to join the community. Benefits of EU membership to Ireland Further information. What the EU does for its citizens.

Since 1957, the European Union has benefited its citizens by working for peace and prosperity. 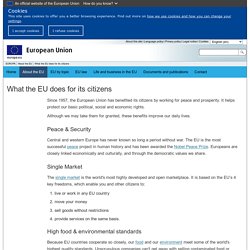 It helps protect our basic political, social and economic rights. Although we may take them for granted, these benefits improve our daily lives. Peace & Security Central and western Europe has never known so long a period without war. Group 1: Ireland & the EU - economy. European Structural and Investment Funds: Country factsheet - Ireland 2014-2020.

Group 2: Ireland & the EU - politics. Gina McIntyre: How has the EU contributed to Peace in Northern Ireland? Brexit explained: What is the problem with the Irish border? Brexit: What is the Northern Ireland Protocol and why are there checks? Brexit: Counting the cost of the Irish sea border. It is now three months on since the UK's separation from the EU and the greatest tension in that time has been over the creation of a brand new border within the UK - the Irish Sea border. 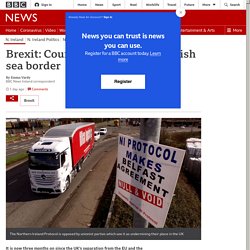 It is part of the Northern Ireland Protocol - a contentious aspect of the Brexit deal, which introduced checks on goods crossing the Irish Sea as a compromise in order to avoid checks on the land border with the Republic of Ireland. However these checks have proved to be controversial and the protocol is opposed by Northern Ireland's unionist parties, who see it as undermining their place in the UK. In order to examine the issue more closely, I hopped on board a lorry going from Great Britain to Northern Ireland to experience the journey - and the movement of goods - for myself. 'Countless hours' on the phone James Allen, the managing director of haulage firm Allen Logistics, knows all about the challenges of navigating the stormy waves of Brexit's trade transition. £50 to £350: Extra cost per pallet.

Group 3: Ireland & the EU - unequal development. Cohesion policy factsheet Ireland 2021-2027. Over €1.2 billion in EU Cohesion Funding proposed for Ireland for the period 2021-2027 – greater focus in future spending on innovation and research and development. Speaking after the seminar, Ms Andriana Sukova, Deputy Director General at the Commission's Directorate General for Employment, Social Affairs and Inclusion, said: "We discussed the current implementation of the European Social Fund which, since 2014, in Ireland has already supported 200,000 unemployed people to get improved capacities, competences and skills. 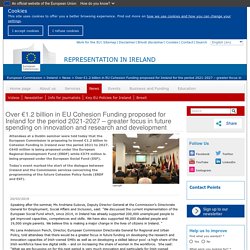 We have also supported 48,000 disabled people and 19,000 single parents. We believe this is making a major change in the lives of citizens in Ireland. " Ms Lena Andersson Pench, Director, European Commission Directorate General for Regional and Urban Policy, told attendees that there would be a greater focus in future funding on developing the research and innovation capacities of Irish-owned SMEs as well as on developing a skilled labour pool –a high share of the Irish workforce have low digital skills – and on increasing the share of women in the workforce. See attached factsheet for more details: Background Information. European Structural and Investment Funds – Making the difference every day. Apple's $14.6B tax bill explained. Brexit: Why is the Irish border so vexing for negotiators? How Northern Ireland's border towns are preparing for Brexit. What Happens to the Irish Border Now Britain's Out? How Brexit Impacts the Irish Border - TLDR News. Londonderry and its region. 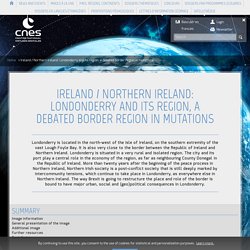 It is a natural color image with native resolution at 10m. Contains information © COPERNICUS SENTINEL 2019, all rights reserved. The city of Londonderry and its region: divided and organised by the Irish border in mutations A city located in a natural shelter on the extremity of Lough Foyle As the picture shows, Londonderry is situated on the extremity of a vast bay called Lough Foyle.