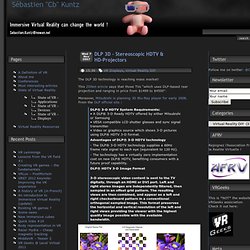 This ZDNet article says that those TVs “which uses DLP-based rear projection and ranging in price from $1499 to $4500″. Moreover, Mitsubishi is planning 3D Blu-Ray player for early 2008. From the DLP official site : A VR Geek's Blog » Virtual Reality Resources. DIY Virtual Reality Helmet Rig. Let’s face it, new advancements in gaming (Project Natal, augmented reality, etc.) and visuals (3D) are going to have a huge impact on gaming and entertainment. 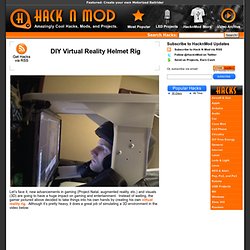 Instead of waiting, the gamer pictured above decided to take things into his own hands by creating his own virtual reality rig. Although it’s pretty heavy, it does a great job of simulating a 3D environment in the video below: We have to admit, this guy has an awesome sense of humor about it, “While strolling around town in my newly built VR rig, no less than three very hot women attempted to tear off my clothes and ravage me. Simultaneously. Fact.” DIY Virtual Reality using the Wiimote. See also: Top 30 Wiimote Hacks of the Web Anyone who’s interested in virtual reality will find German Timo Fleisch quite fascinating. 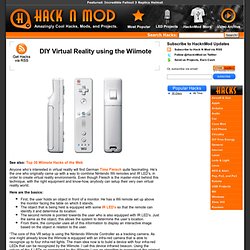 He’s the one who originally came up with a way to combine Nintendo Wii remotes and IR LED’s, in order to create virtual reality environments. Even though Fleisch is the master-mind behind this technique, with the right equipment and know-how, anybody can setup their very own virtual reality world. Here are the basics: First, the user holds an object in front of a monitor. “The core of this VR setup is using the Nintendo Wiimote Controller as a tracking camera. 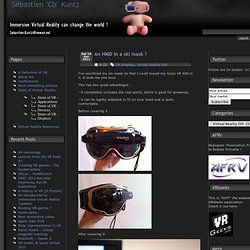 Sony liked the interview and decided to put it in the (french) press kit: The interview was done after testing the basic sports games, and my initial reaction was very good. I had to unlearn the bad habits of Wii Sports where you just had to shake the wiimote at the right time to catch the tennis ball. Now you have to really move ! Come closer, move your hand to realistic positions and orient it in a useful way. They really improved perceptive immersion by having you do basic moves like actually doing the movement for taking an arrow before being able to shoot it. Heavy Rain will have a new edition based on the PSMove and I’m eager to test that further. I also made the point that future hardcore gamers will have to improve their physical abilities to be better at games.

I fear the aiming will not be as good as I hoped for. VR goggles turn the real world into ASCII art. Sure, ASCII art is cool for making lewd gestures and the unicorn that you use for your e-mail signature, but couldn't we be doing more with it? 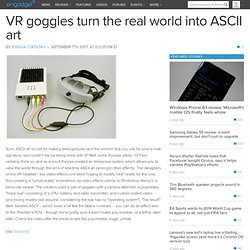 Well, some Russian artists / DIY'ers certainly think so, and as a result they've created an immersive system which allows you to view the world through the lens of real-time ASCII art (amongst other effects). The designers of this VR headset / live video-effects-unit were hoping to modify "real" reality for the user, thus creating a "virtual reality" experience via video effects (similar to Photoshop filters) in a binocular viewer. The creators used a pair of goggles with a camera attached, a proprietary "black box" consisting of a CPU, battery, and radio transmitter, and custom-coded video processing modes (we assume, considering the box has no "operating system").

The result? [Via Slashdot] DIY Flight Sims - Virtual Reality Helmet. Homebrew 3D Shutterglasses Controllers. Back to Know-How-Page You are unsatisfied with the range of compatibility of your 3D glasses controller? 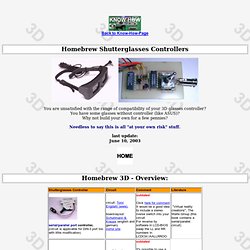 Mitsubishi TV - Unisen LED TV. D.I.Y Virtual Reality – A gaming interface? « SchnommusBlog. A little Backstory A couple of months ago I began building a VR-type system (headtracking, HUD etc), with the (rather ambitious) requirement that it would be able to interface into any game that I throw at it. I succeeded (mostly), but before I get into that, I’m going to give some story of how it came to be: V.R – For Noobs? I first came up with the idea when I (by chance) came across these MyVu devices on eBay: Wikipedia: Myvu Personal Media Viewer refers to a product family of wearable video display glasses released by Myvu Corporation.[1]Myvu provides increased viewing usability and portability for users Interesting, I thought. . Once that had arrived, I started playing Crysis on these video glasses, but it wasn’t really a fulfilling experience… Still having to use the mouse+keyboard is kinda strange.

It was then that I found sparkfun electronics, and put these items in my humble cart: Atomic IMU (6 D.O.F )USB FDTI breakout board.