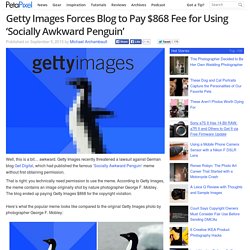 Getty Images recently threatened a lawsuit against German blog Get Digital, which had published the famous ‘Socially Awkward Penguin’ meme without first obtaining permission. That is right: you technically need permission to use the meme. According to Getty Images, the meme contains an image originally shot by nature photographer George F. Mobley. The blog ended up paying Getty Images $868 for the copyright violation.

The ‘Socially Awkward Penguin’ meme (left) compared to the original image (right). GIF YouTube Easily Converts YouTube Clips to Your Favorite Animated Format. GIF YouTube is the YouTube-to-GIF converter we’ve all been waiting for… well, GIF lovers at any rate. 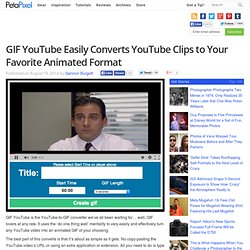 It uses the ‘do one thing well’ mentality to very easily and effectively turn any YouTube video into an animated GIF of your choosing. The best part of this converts is that it’s about as simple as it gets. No copy-pasting the YouTube video’s URL or using an extra application or extension. All you need to do is type “gif” before “youtube” in the URL and you’re on your way to creating your GIF: i.e. www.youtube.com/videourl becomes www.gifyoutube.com/videourl. Once you’ve done that, you simply choose a start time, select the desired duration (up to 10 seconds) and you’ve got yourself a GIF that’s ready to share or save. Cari Vander Yacht’s Vintage Photo GIFs. Super Simple Effect Makes Regular GIFs or Photos Seem Three Dimensional. Actual 3D footage can be a pain, both to capture and to watch, which is why we fell in love with this super simple technique when we ran across it. 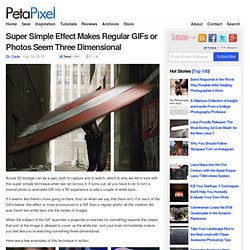 It turns out, all you have to do to turn a normal photo or animated GIF into a 3D experience is add a couple of white bars… If it seems like there’s more going on here, trust us when we say that there isn’t. For each of the GIFs below (the effect is more pronounced in a GIF than a regular photo) all the creators did was insert two white bars into the series of images. When the subject of the GIF launches a projectile or reaches for something towards the viewer, that part of the image is allowed to cover up the white bar, and your brain immediately makes you feel like you’re watching something three-dimensional.

Here are a few examples of this technique in action: Plus, if you add a bit of text and further visual trickery, the effect can become even more pronounced: (via My Modern Met via Digital Trends) .gifs - funny, animated gifs for your viewing pleasure. The Interminable, Everlasting Lincolns (Part 2) This is the third installment of a four-part series. 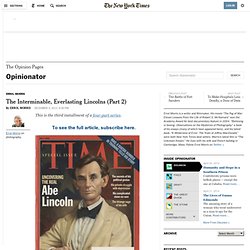 Time Time magazine was planning to publish a commemorative issue on Lincoln. Keya Morgan, a young, successful collector, was asked to provide a copy of O-118 for the junior senator from Illinois, Barack Obama. KEYA MORGAN: He wrote a full article about my photo for Time magazine, and the editors got the date wrong. Before and after photoshop. Ethical Inquiry: August 2012. Seventeen Magazine's "Body Peace Treaty" as reprinted by the New York Times The Ethics of Digital Photo Manipulation: Alterations in Pursuit of “Beauty” Alteration of images has been occurring since the inception of photography. 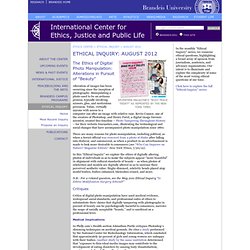 Manipulating a photo used to be an arduous process, typically involving scissors, glue, and meticulous precision. Today, virtually anyone with access to a computer can alter an image with relative ease. Kevin Connor, one of the creators of Photoshop, and Henry Farid, a digital image forensic scientist, created this timeline – Photo Tampering Throughout History – for their website fourandsix.com, illustrating the technological and social changes that have accompanied photo manipulation since 1860.

N.B.: For a related question, see the May 2011 Ethical Inquiry “Is Ethnic Modification Surgery Ethical?” Critiques Medical Implications In Philly.com’s Health section Johnathan Purtle critiques Photoshop’s slimming techniques on medical grounds. Better Represents Reality. The Ethics of Digital Manipulation. In the example see above, we have changed the red color of M8, the Lagoon Nebula, whose main spectral emission lies in the red portion of the spectrum, to blue with a simple adjustment in Photoshop. 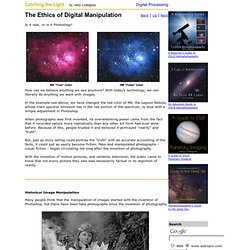 When photography was first invented, its overwhelming power came from the fact that it recorded nature more realistically than any other art form had ever done before. Because of this, people trusted it and believed it portrayed "reality" and "truth". But, just as story telling could portray the "truth" with an accurate accounting of the facts, it could just as easily become fiction. Fake and manipulated photographs - visual fiction - began circulating not long after the invention of photography. With the invention of motion pictures, and certainly television, the public came to know that not every picture they saw was necessarily factual in its depiction of reality.

Historical Image Manipulation. Fotoshop by Adobé. Is this shopped? Truth, lies, and art before and after Photoshop. The Photoshop Effect.