Terrorism in the Digital Era 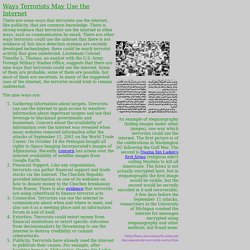 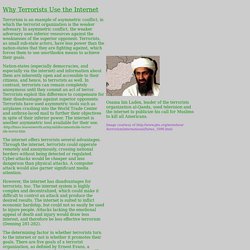 In asymmetric conflict, the weaker adversary uses inferior resources against the weaknesses of the superior opponent. Terrorists, as small sub-state actors, have less power than the nation-states that they are fighting against, which forces them to use unorthodox means to achieve their goals. Nation-states (especially democracies, and especially via the internet) and information about them are inherently open and accessible to their citizens, and hence, to terrorists as well. In contrast, terrorists can remain completely anonymous until they commit an act of terror. Terrorists exploit this difference to compensate for their disadvantages against superior opponents. How terrorists are using social media. 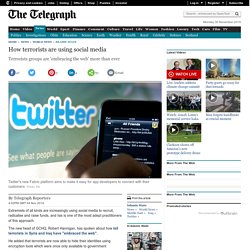 Its posting activity has ramped up during a recent offensive, reaching an all-time high of almost 40,000 tweets in one day as they marched into the northern Iraqi city of Mosul. Twitter has tried to counter Isis, suspending more than 1,000 accounts it suspected of terrorist links. Amateur videos and images are being uploaded daily by its footsoldiers, which are then globally shared both by ordinary users and mainstream news organisations.

Isis use of hashtags is interesting, as they focus them on group messaging and branding concepts. Social-media monitor Recorded Future found that Isis had succeeded in creating hype with a total of 700,000 accounts discussing the terrorist group. 36306 6. R41674. Terrorist Activities on the Internet - Terrorism Update. GCHQ, terrorists, and the internet: What are the issues? GCHQ boss Robert Hannigan has warned that US technology companies have become the "command and control" network for terrorists. 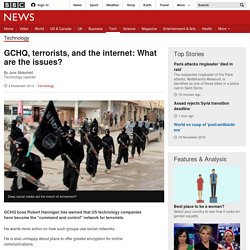 He wants more action on how such groups use social networks. He is also unhappy about plans to offer greater encryption for online communications. So can the uneasy relationship between tech firms and the security services be rebuilt? What exactly is Mr Hannigan worried about? His concerns appear to be twofold. And secondly he is not happy about pledges from Microsoft, Google, Apple and Yahoo to make encryption a default option to protect users from government snooping. Tech firms are keen to put user privacy top of the agenda following allegations from former US National Security Agency (NSA) contractor Edward Snowden about mass surveillance in the US and the UK.

How are extremist groups using social media? The internet is a tool for communication so it should come as little surprise that extremists are using it to recruit, plan campaigns and spread their messages. Social Networks, Terrorism and Counter-terrorism: Radical and Connected - Google Books. Brief 2 cyber jihad. Terrorism and Counterterrorism: Comparing Theory and Practice - Universiteit Leiden. Terrorism has arguably been one of the defining factors of our age. 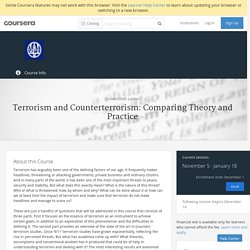 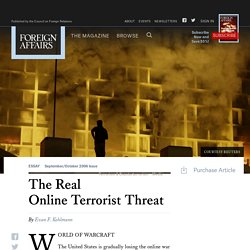 Rather than aggressively pursuing its enemies, the U.S. government has adopted a largely defensive strategy, the centerpiece of which is an electronic Maginot Line that supposedly protects critical infrastructure (for example, the computer systems run by agencies such as the Department of Defense and the Federal Aviation Administration) against online attacks. In the meantime, terrorists and their sympathizers, unhindered by bureaucratic inertia and unchallenged by Western governments, have reorganized their operations to take advantage of the Internet's more prosaic properties.

The U.S. government is mishandling the growing threat because it misunderstands terrorists. Terrorists and the Internet. Author: Eben Kaplan Updated: January 8, 2009 This publication is now archived. 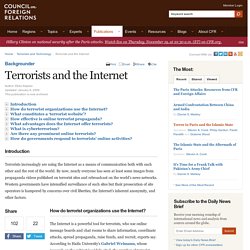 Introduction Terrorists increasingly are using the Internet as a means of communication both with each other and the rest of the world. By now, nearly everyone has seen at least some images from propaganda videos published on terrorist sites and rebroadcast on the world's news networks. Cyber Terrorism And Terrorist Use Of ICT And Cyberspace. Cyberspace is a virtual space that has become as important as real space for businesses, economics, politics and communities. 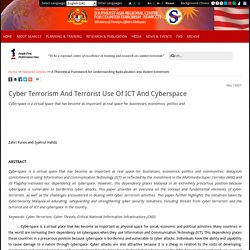 Malaysia’s commitment in using Information and Communication Technology (ICT) as reflected by the investment in the Multimedia Super Corridor (MSC) and its Flagship increases our dependency on cyberspace. However, this dependency places Malaysia in an extremely precarious position because cyberspace is vulnerable to borderless cyber attacks. An Error Occurred Setting Your User Cookie. Untitled. The Islamic State group, or IS (ISIS) is a name that has seldom been far from news headlines over past two years. 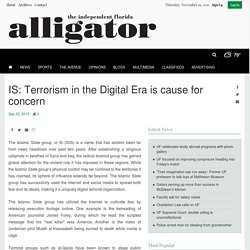 After establishing a religious caliphate in swathes of Syria and Iraq, the radical Islamist group has gained global attention for the violent rule it has imposed in these regions. While the Islamic State group’s physical control may be confined to the territories it has claimed, its sphere of influence extends far beyond. The Islamic State group has successfully used the Internet and social media to spread both fear and its ideals, making it a uniquely digital terrorist organization. The Islamic State group has utilized the Internet to cultivate fear by releasing execution footage online. One example is the beheading of American journalist James Foley, during which he read the scripted message that his "real killer" was America.

These methods are also in line with the group’s goals as an organization. Namwan Leavell is a UF economics senior. Fathom – Terrorism in cyberspace. Professor Gabriel Weimann spoke to a Fathom Forum about his book Terrorism in Cyberspace: The Next Generation. 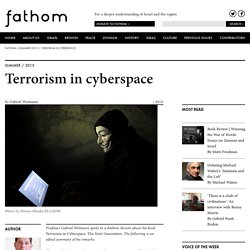 The following is an edited summary of his remarks. The use of the internet by terrorists has grown exponentially. In 1998 we found 12 websites of terrorist groups, including Al-Qaeda. Today, we are dealing with just over 9,800 terrorist websites. In addition to this traditional online presence there is now extensive use of social media. Lone Wolves and Virtual Packs One new trend is lone wolf terrorism.

Cyberterrorism. What is the terrorist threat in cyber-space? What is the terrorist threat in cyber-space? Is this threat likely to grow in the coming decades? The typical approaches to warfare, force, offence, defence and deterrence, do not necessarily cross over into cyber conflicts, be they for cyber warfare or countering cyber-terrorism. The world of network interactions changes the rules of the game, where the attackers can more easily remain anonymous, and the targets can be anything that is on an open network.

This presents an immediate issue; so long as nations, businesses and civilians rely on computer networks as a basis for modern life, and these computer networks are connected to the outside world, they will be at permanent risk of attack. Those that choose to attack their targets through networks do so through the exploitation of system vulnerabilities (Libicki 2009: xiii-xiv). These anxieties have promoted a view on the internet and open networks as potentially dangerous places. Bibliography The BBC (2010a) 13th December 2010. Use of Internet for Terrorist Purposes. Terrorism in Cyberspace: The Dark Future? Webcast. TITLE: Terrorism in Cyberspace: The Dark Future? SPEAKER: Gabriel Weimann EVENT DATE: 2015/06/10 RUNNING TIME: 77 minutes TRANSCRIPT: View Transcript (link will open in a new window)

Terrorism in Cyberspace: The Next Generation. Summary The war on terrorism has not been won, Gabriel Weimann argues in Terrorism in Cyberspace, successor to his seminal 2006 book, Terror on the Internet. Even though al-Qaeda’s leadership has largely been destroyed and its organization disrupted, terrorist attacks take 12,000 lives annually worldwide and jihadist terrorist ideology continues to spread. How? Largely by going online and adopting a new method of organization. Terrorism, Communication and New Media: Explaining Radicalization in the Digital Age. Terrorism, Communication and New Media: Explaining Radicalization in the Digital Age by Cristina Archetti Abstract This article aims to demonstrate that a greater understanding of communication in the 21st century is essential to more effective counterterrorism. In fact, while “strategic communication” and “narratives” are advocated by many analysts as essential weapons in countering extremism, few seem to truly understand the reality of the digital-age information environment where such tools need to be deployed.

To contribute to bridging this gap, the article outlines some problematic misunderstandings of the contemporary information environment, provides an alternative communication-based framework to explain radicalization, and draws some counterintuitive lessons for tackling terrorism. Keywords: communication; media; radicalization; narratives; terrorism. Radicalisation in the digital era: The use of the internet in 15 cases of terrorism and extremism. Social Informatics: Principles, Theory, and Practice. Through this paper we make two contributions to social informatics: the interdisciplinary study of the design, development, uses and consequences of information and communication technologies that takes into account their interaction with institutional and cultural contexts. Our first contribution is to make a connection from social informatics to general principles of socio-technical theories.