Critical Security Controls. The 20 controls (and sub-controls) focus on various technical measures and activities, with the primary goal of helping organisations prioritise their efforts to defend against the current most common and damaging computer and network attacks. 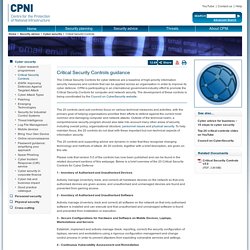 Outside of the technical realm, a comprehensive security program should also take into account many other areas of security, including overall policy, organisational structure, personnel issues and physical security. To help maintain focus, the 20 controls do not deal with these important but non-technical aspects of information security. The 20 controls and supporting advice are dynamic in order that they recognise changing technology and methods of attack. All 20 controls, together with a brief description, are given on this site. Please note that version 5.0 of the controls has now been published and can be found in the related document sections of this webpage. iDATA: Improving Defences Against Targeted Attack. Article Summary The corporate IT systems of UK organisations are targeted by adversaries seeking to steal information and/or disrupt business operations. iDATA is a CPNI programme of research to address cyber-attacks conducted by adversaries with significant resources and access to sophisticated tools and techniques. 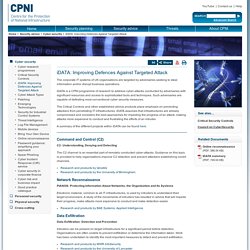 Such adversaries are capable of defeating most conventional cyber security measures. The Critical Controls and other established advice products place emphasis on preventing attackers from penetrating IT infrastructures. iDATA assumes that infrastructures are already compromised and considers the best approaches for impeding the progress of an attack, making attacks more expensive to conduct and frustrating the efforts of an intruder. A summary of the different projects within iDATA can be found here. Cyber Essentials - OFFICIAL SITE. The Cyber Essentials scheme provides businesses small and large with clarity on good basic cyber security practice. 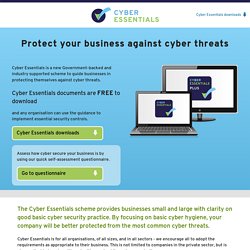 By focusing on basic cyber hygiene, your company will be better protected from the most common cyber threats. Cyber Essentials is for all organisations, of all sizes, and in all sectors - we encourage all to adopt the requirements as appropriate to their business. This is not limited to companies in the private sector, but is also applicable to universities, charities, and public sector organisations. Counter terrorism awareness operation launched. 09 June 2014 A major initiative designed to increase awareness of security and counter terrorism policing in London is being launched today, Monday 9 June, by the Metropolitan Police Service (MPS), City of London Police (CoLP) and British Transport Police (BTP). 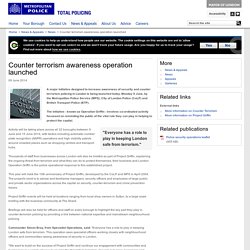 The initiative - known as Operation Griffin - involves co-ordinated activity focussed on reminding the public of the vital role they can play in helping to protect the capital. "Everyone has a role to play in keeping London safe from terrorism. " Activity will be taking place across all 32 boroughs between 9 June and 15 June 2014, with tactics including automatic number plate recognition (ANPR) operations and high visibility patrols around crowded places such as shopping centres and transport hubs. Counter Terrorism Cyber & Digital Operations. Recognising the terrorist threat.

There is a serious and sustained threat from both international and Irish-related terrorism to the UK and UK interests overseas. 1. 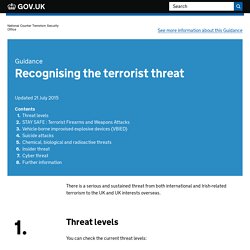 Threat levels You can check the current threat levels: The most significant terrorist threat comes from al-Qa’ida and associated networks. UK Message following the attacks in Paris 13 November 2015. Be Reassured The threat from International Terrorism to the United Kingdom remains at SEVERE - an attack is highly likely; this has been since August 2014. 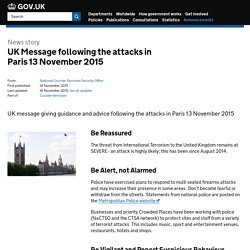 Be Alert, not Alarmed.