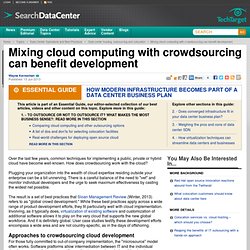 How does crowdsourcing work with the cloud? Plugging your organization into the wealth of cloud expertise residing outside your enterprise can be a bit unnerving. There is a careful balance of the need to "vet" and monitor individual developers and the urge to seek maximum effectiveness by casting the widest net possible. The result is a set of best practices that Sloan Management Review (Winter, 2013) refers to as "global crowd development. " While these best practices apply across a wide range of product development efforts, they fit particularly well with cloud implementation. Approaches to crowdsourcing cloud development. The Impact of the Crowdsourcing Revolution: A TEDx Talk. Crowdsourcing, if implemented wisely, can be beneficial to nearly every aspect of society, argue two Dutch authors in a recently released TEDx talk. 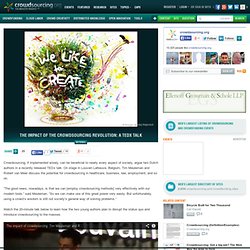 On stage in Louvain LaNeuve, Belgium, Tim Meuleman and Robert van Meer discuss the potential for crowdsourcing in healthcare, business, law, employment, and so on. “The good news, nowadays, is that we can [employ crowdsourcing methods] very effectively with our modern tools,” said Meuleman. “So we can make use of this great power very easily. But unfortunately, using a crowd’s wisdom is still not society’s general way of solving problems.”

Watch the 20-minute talk below to learn how the two young authors plan to disrupt the status quo and introduce crowdsourcing to the masses. Thanks to Remco Kerver for adding this video to our user-submitted section. The Impact of the Crowdsourcing Revolution: A TEDx Talk. Here Comes Everybody - by Clay Shirky. Like Wikinomics and Crowdsourcing, required reading if interested in harnessing the collective power of people online. 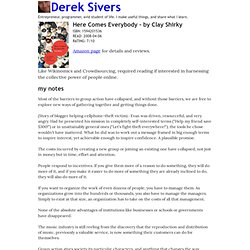 Most of the barriers to group action have collapsed, and without those barriers, we are free to explore new ways of gathering together and getting things done. (Story of blogger helping cellphone-theft victim) : Evan was driven, resourceful, and very angry. Had he presented his mission in completely self-interested terms ("Help my friend save $300! ") or in unattainably general ones ("Let's fight theft everywhere! "), the tools he chose wouldn't have mattered. The costs incurred by creating a new group or joining an existing one have collapsed, not just in money but in time, effort and attention.

People respond to incentives. CrowdSourcing - by Jeff Howe. Great look at a different way of getting a project done: not outsourcing it to a person, but developing a system where thousands of people can contribute a little bit. 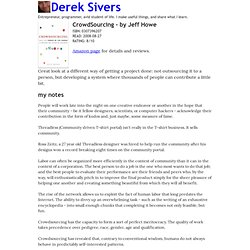 People will work late into the night on one creative endeavor or another in the hope that their community - be it fellow designers, scientists, or computer hackers - acknowledge their contribution in the form of kudos and, just maybe, some measure of fame. Threadless (Community driven T-shirt portal) isn't really in the T-shirt business. It sells community. Ross Zeitz, a 27 year old Threadless designer was hired to help run the community after his designs won a record breaking eight times on the community portal.

Labor can often be organized more efficiently in the context of community than it can in the context of a corporation. The rise of the network allows us to exploit the fact of human labor that long predates the Internet. Crowdmap. The Verge interview: David Carr on curation, crowdsourcing, and the future of journalism. 212inShare Jump To Close David Carr has written about media for over 25 years, from his early days in Minneapolis, Minnesota, to Washington, D.C., to his current post at The New York Times, where he’s been for almost a decade. 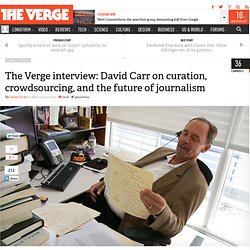 His weekly column, "The Media Equation," covers all aspects of journalism and culture, especially the always-evolving world of online news; his recent work has questioned the rise of Twitter activism, investigated the failure of Tribune media, and mused on Louis C.K.'s successful experiment in self-distributed comedy. Let’s start by talking about the Curator’s Code. Find the best product for you! Edit Huddle: The Crowd as Editor. By Rachel Hyman, head of marketing at Edit Huddle Blog Errors are a Problem Think about your favorite blogs, whether they’re political, tech, or news blogs. 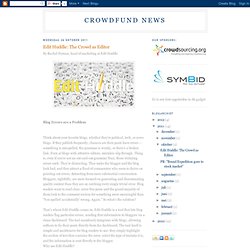 If they publish frequently, chances are their posts have errors — something is misspelled, the grammar is wonky, or there’s a broken link. Even at blogs with attentive editors, mistakes slip through. Thing is, even if you’re not an out-and-out grammar Nazi, those irritating errors suck. That’s where Edit Huddle comes in. Everyone on the Edit Huddle team is a huge blog reader, and we all get frustrated over errors, especially when the comment section gets inundated with people more concerned with pointing out mistakes than with having a productive discussion.

We believe that there’s a large market of blog readers who would avail themselves of the Edit Huddle tool — much larger than self-proclaimed grammar Nazis who take to the comment section upon spotting errors. Thought Catalog posts about 65 times a week. Human Translation, Translation Services and Translation API. Top Crowdsourcers in Australia. 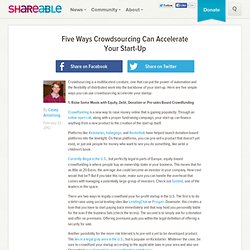 Here are five simple ways you can use crowdsourcing accelerate your startup: 1. Raise Some Moola with Equity, Debt, Donation or Pre-sales Based Crowdfunding Crowdfunding is a new way to raise money online that is gaining popularity. Through an online open call, along with a proper fundraising campaign, your start-up can finance anything from a new product to the creation of the start-up itself. Platforms like Kickstarter, Indiegogo, and Rockethub have helped launch donation-based platforms into the limelight. Currently illegal in the U.S., but perfectly legal in parts of Europe, equity-based crowdfunding is where people buy an ownership stake in your business.

There are two ways to legally crowdfund your for-profit startup in the U.S. Another possibility for the more risk tolerant is to pre-sell a yet to be developed product. 2. 3. Massolution. CrowdCityConcept (crowdcity) Distilled Wisdom, Emerging forms of Crowdsourcing. InnoCentive. Google Translate. CrowdSPRING - The Story Behind The Start-up. Logo Design, Web Design and Writing by the World's Best Creative Team. 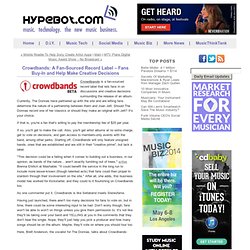 Currently, The Donnas have partnered up with the site and are letting fans determine the nature of a partnership between them and Joan Jett. Should The Donnas record one of her classics or should they make an original with Jett? It's your choice. If that is, you're a fan that's willing to pay the membership fee of $25 per year. 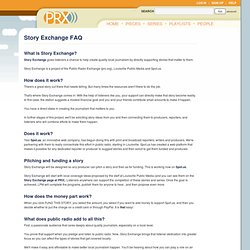 Story Exchange gives listeners a chance to help create quality local journalism by directly supporting stories that matter to them. Story Exchange is a project of the Public Radio Exchange (prx.org), Louisville Public Media and Spot.us. How does it work? There's a great story out there that needs telling. S Hall of Fame. There are a myriad of possibilities in the search for crowdsourcing milestones that announced its advent and its adoption as a model for online production, problem solving and for organizing for collective action: Commercial applications, advertising campaigns that succeed or backfire, funding for entrepreneurial ventures. 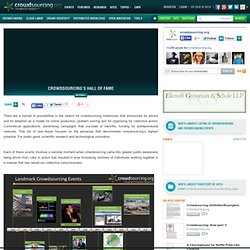 This list of one dozen focuses on the pinnacles that demonstrate crowdsourcing’s highest potential: For public good, scientific research and technological innovation. Crowdsourcing Management Reviews for Better Management - Linda Hill & Kent Lineback. The January-February issue of Harvard Business Review features a series of short articles that each present an “audacious idea.”

Our piece in that series — “Crowdsource Management Reviews — And Make Them Public, Too” asks what you would do if your employees were assessing their bosses online and making their collective assessments public. Here’s the situation we described: A group of employees has set up an independent website where all employees can use online social collaboration tools to assess their bosses on eight key managerial dimensions — such as delegation, communication, clarity of direction, and the like — taken from your company’s basic course on management. All the individuals’ ratings for a boss are aggregated into a single rating for each dimension. Individual comments are aggregated into a single review — like a wiki, which is a single document composed by multiple authors. We believe employees are increasingly likely to set up such review sites themselves. Crowdsourcing Explodes in China. GoRankem Upgrades Crowdsourced "Cheat Sheat For Music Discovery"

The CrowdBusiness Daily. Crowdsourcing.org (crowdsourcing_) Free Chapters. Free Chapters Feel free to download copies of the free chapters and frameworks. Why Every College Should Start Crowdsourcing. Michelle Lindblom is a Communications Associate at Wired Impact, a web design company that builds websites for nonprofits. You can connect with Wired Impact on Twitter and Facebook. Just like all large organizations, universities have their fair share of problems. These problems come in all shapes and sizes and can sometimes seem unrelenting.