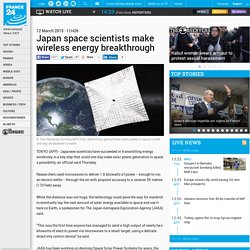 Researchers used microwaves to deliver 1.8 kilowatts of power -- enough to run an electric kettle -- through the air with pinpoint accuracy to a receiver 55 metres (170 feet) away. While the distance was not huge, the technology could pave the way for mankind to eventually tap the vast amount of solar energy available in space and use it here on Earth, a spokesman for The Japan Aerospace Exploration Agency (JAXA) said. "This was the first time anyone has managed to send a high output of nearly two kilowatts of electric power via microwaves to a small target, using a delicate directivity control device," he said. 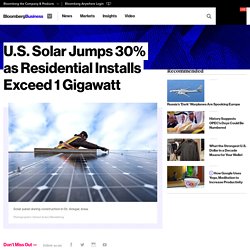 Developers installed a record 6.2 gigawatts of panels last year, including about 1.2 gigawatts atop homes, the Washington-based trade group said today in a statement. About 3.9 gigawatts of utility-scale and 1 gigawatt of commercial solar power were added. The residential market remained the fastest-growing segment, gaining at least 50 percent in each of the past three years, as cheaper panels and growing consumer awareness of climate change spurred interest among homeowners. Solar Engineering. Discover How Solar Panels Are Made. Converting wafers into cells At this point, a wafer is no more capable of producing electricity than a sliver of river rock. 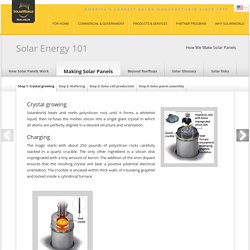 The wafer is the main building block of a PV cell, but so far its only notable characteristics are its crystal structure and positive potential orientation. Solar Panel Production Process Video.

SunTech is a smaller company that has been down over the past 2 years. Market Cap at 17M – danielosterhout 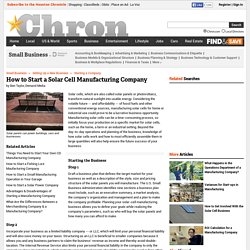 Beyond the day-to-day operations and planning of the business, knowledge of how solar cells work and how to most efficiently assemble them in large quantities will also help ensure the future success of your business. Starting the Business Step 1 Draft a business plan that defines the target market for your business as well as a description of the style, size and pricing structure of the solar panels you will manufacture. 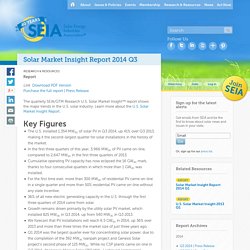 Solar Market Insight™ report shows the major trends in the U.S. solar industry. Learn more about the U.S. Chinese demand fuels renewables sector turnaround. Production of wind turbines and solar panels soared in 2014, as increased demand from China fueled a turnaround for renewable energy manufacturers that had struggled with overcapacity and a sharp slowdown in demand from developed countries in recent years. 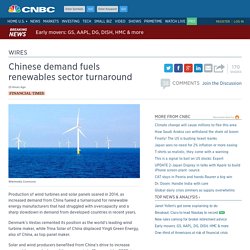 Denmark's Vestas cemented its position as the world's leading wind turbine maker, while Trina Solar of China displaced Yingli Green Energy, also of China, as top panel maker. Solar and wind producers benefited from China's drive to increase renewable energy's share of its power mix to 15 per cent by 2020, in an effort to cut smog and reduce greenhouse gas emissions. Vestas outstripped its rivals for the second year running in the amount of turbine generating capacity it sold in 2014, according to FTI Consulting, a global business advisory group. Germany's Siemens was the second-biggest turbine maker last year, followed by China's Goldwind and General Electric of the US. In Case You Missed It, Obama Just Proposed The Solar Tax Credit Remain in Effect. 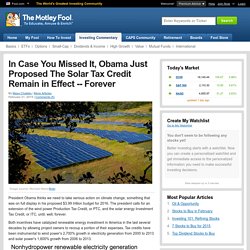 President Obama thinks we need to take serious action on climate change, something that was on full display in his proposed $3.99 trillion budget for 2016. The president calls for an extension of the wind power Production Tax Credit, or PTC, and the solar energy Investment Tax Credit, or ITC, until, well, forever. Both incentives have catalyzed renewable energy investment in America in the last several decades by allowing project owners to recoup a portion of their expenses. Tax credits have been instrumental to wind power's 2,700% growth in electricity generation from 2000 to 2013 and solar power's 1,600% growth from 2006 to 2013. Although unlikely to pass into law in its entirety, Obama's proposal establishes a high starting point at the bargaining table, which could mean the PTC and ITC will be extended in some form or another when the dust settles.

Trends In The Solar Industry: Capital Costs Drop, While Solar Companies Re-invent Themselves.