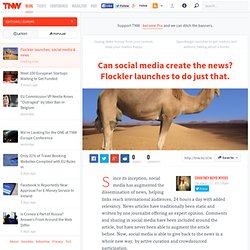 News articles have traditionally been static and written by one journalist offering an expert opinion. Comments and sharing in social media have been included around the article, but have never been able to augment the article before. Now, social media is able to give back to the news in a whole new way, by active curation and crowdsourced participation. Two years ago, Finnish entrepreneur Toni Hopponen was working as a product manager for visionary entrepreneur Tuomas Kumpula, the co-founder of Geniem Ltd, which offered mobile and social media services for brands. With a passion for the news business, Hopponen began to develop an idea for a new project after several discussions with local media companies. 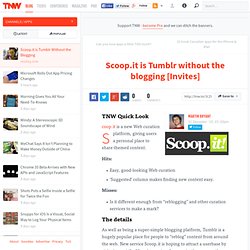 News Curation with Scoop.it: A Video Interview with Guillaume Decugis. Stacis-rules-for-storify?awesm=sfy.co_4lJ&utm_campaign=girljournalist&utm_content=storify-pingback&utm_medium=sfy.co-twitter&utm_source=direct-sfy. Social media curation is what Storify's all about. 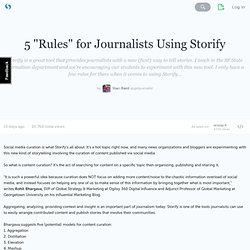 It's a hot topic right now, and many news organizations and bloggers are experimenting with this new kind of storytelling involving the curation of content published via social media. So what is content curation? It's the act of searching for content on a specific topic then organizing, publishing and sharing it. "It is such a powerful idea because curation does NOT focus on adding more content/noise to the chaotic information overload of social media, and instead focuses on helping any one of us to make sense of this information by bringing together what is most important," writes Rohit Bhargava, SVP of Global Strategy & Marketing at Ogilvy 360 Digital Influence and Adjunct Professor of Global Marketing at Georgetown University on his Influential Marketing Blog. 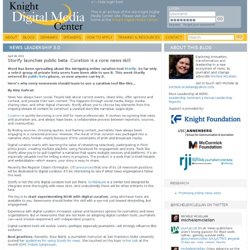 So far only a select group of private beta users have been able to use it. This week Storify entered its public beta phase, so now anyone can try it. </b>*} Liveblog live blogging.

Boulder. LOUD3R platform combines curation and automation. Advertisement As media companies look to content aggregation and curation to feed the need for more content, the solutions are getting more robust. 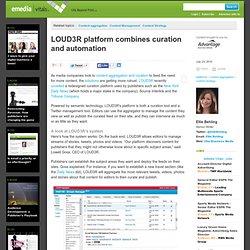 LOUD3R recently unveiled a redesigned curation platform used by publishers such as the New York Daily News (which holds a major stake in the company), Source Interlink and the Tribune Company. Powered by semantic technology, LOUD3R's platform is both a curation tool and a Twitter management tool. Editors can use the aggregator to manage the content they view as well as publish the curated feed on their site, and they can intervene as much or as little as they want. A look at LOUD3R's system Here's how the system works: On the back end, LOUD3R allows editors to manage streams of stories, tweets, photos and videos. Publishers can establish the subject areas they want and deploy the feeds on their sites, Goss explained. The content can be integrated with Twitter, Facebook and Wordpress. 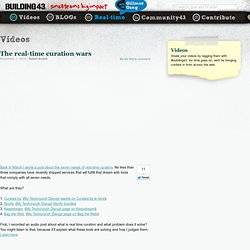 No less than three companies have recently shipped services that will fulfill that dream with tools that comply with all seven needs. What are they? 1. Curated.by. Wanted: Social Media Sifters. Jonathan Spier, chief executive officer of social media analytics company NetBase, had the chance in early 2009 to win a multimillion-dollar contract for his 25-person firm if he could answer one question: Why do men sport stubble? 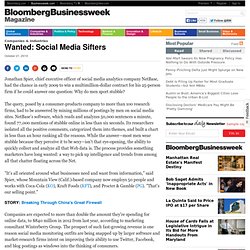 The query, posed by a consumer-products company to more than 100 research firms, had to be answered by mining millions of postings by men on social media sites. NetBase's software, which reads and analyzes 50,000 sentences a minute, found 77,000 mentions of stubble online in less than six seconds. Its researchers isolated all the positive comments, categorized them into themes, and built a chart in less than an hour ranking all the reasons.

While the answer—most men wear stubble because they perceive it to be sexy—isn't that eye-opening, the ability to quickly collect and analyze all that Web data is. The process provides something marketers have long wanted: a way to pick up intelligence and trends from among all that chatter floating across the Net.