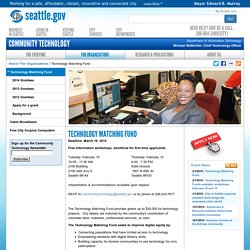 $470,000 in matching funds offered for technology projects; applications due ... CDBG-02_11_15_NDRC_Public_Comment_Doc_.pdf. Investors Encourage Further Transparency, Standardization to Spur Green Bond ... As the green bonds market continues to show impressive growth, leading investors released a Statement of Investor Expectations to support the development of a consistent, durable framework for the green bonds market, which has enormous potential to grow, especially in regard to clean energy financing and other solutions to climate change. 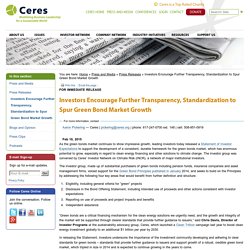 As the green bonds market continues to show impressive growth, leading investors today released a Statement of Investor Expectations to support the development of a consistent, durable framework for the green bonds market, which has enormous potential to grow, especially in regard to clean energy financing and other solutions to climate change. The investor group was convened by Ceres’ Investor Network on Climate Risk (INCR), a network of major institutional investors. Identified by Ceres as one of 10 key drivers of a low-carbon economy in its 2014 Clean Trillion analysis, green bonds will help accelerate private capital flows into clean energy.

The WELL Building Standard: Buildings bonding us to nature. The new WELL Building standard will work with LEED with the intent to promote a healthier human environment based on nature. 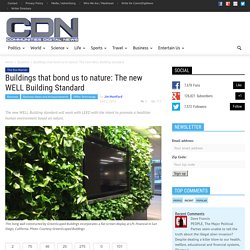 SAN DIEGO, February 2, 2015 – In just 14 short years, the Leadership in Energy and Environmental Design (LEED) green building certification system has become the standard for energy-saving, cost-efficient building in the United States and abroad. The LEED standard is familiar to the general public and a source of pride and even brand marketing for office buildings, hotels, schools, and other community projects. Loving the Puget Sound to Death. (Illustration by Tim Robinson) This article was reported with support from the National Health Journalism Fellowship, a program of the USC Annenberg School for Communication and Journalism. 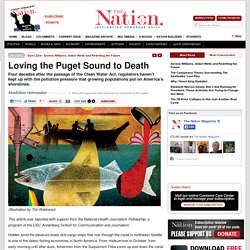 Hidden amid the pleasure boats and cargo ships that roar through the canal in northwest Seattle is one of the oldest fishing economies in North America. From midsummer to October, from early morning until after dusk, fishermen from the Suquamish Tribe zoom up and down the canal in orange waterproof overalls, tending to salmon nets that dangle across the water like strings of pearls.

The tribe holds reservation land about ten miles west of the city, on the far side of Puget Sound, the 100-mile-long estuary that extends from Olympia, Washington, north to the Strait of Juan de Fuca. 4 Emergency Phone Chargers Review. Mycorrhizae (I want to be a fungus!) 5 Ideas That Could Have Prevented Flooding in New York.

New York City didn’t have to flood quite this badly, or, at least, it doesn’t have to again. 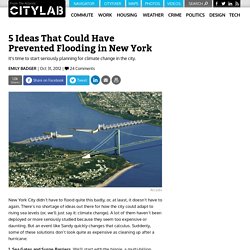 There's no shortage of ideas out there for how the city could adapt to rising sea levels (or, we’ll just say it: climate change). A lot of them haven’t been deployed or more seriously studied because they seem too expensive or daunting. But an event like Sandy quickly changes that calculus. Suddenly, some of these solutions don’t look quite as expensive as cleaning up after a hurricane: 1. Arcadis estimated at the time that the cost of constructing such a project would be about $6.5 billion. 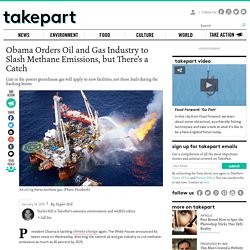 The White House announced its latest move on Wednesday, directing the nation’s oil and gas industry to cut methane emissions as much as 45 percent by 2025. The executive action is an important step in the fight to suppress global warming because methane emissions, while lower than carbon dioxide emissions, trap more than 25 times more heat in the atmosphere. Environmentalists welcomed the announcement, but some suggested that the mandate falls short by applying largely to new oil- and gas-industry facilities.

“While addressing new sources is a critical step, in order to get a 40 to 45 percent reduction...the Obama administration must take stronger action to clean up existing sources,” Earthjustice’s lead counsel, Tim Ballo, said in a statement. In his first term, Obama targeted carbon dioxide emissions from cars and trucks with improved fuel-efficiency standards. These Incredible Tiny Islands Suck Pollution Out of Water. Cleaning up dirty water has been on the agenda of many scientists lately. 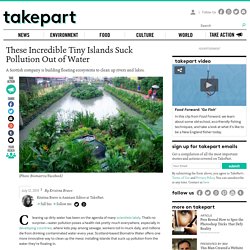 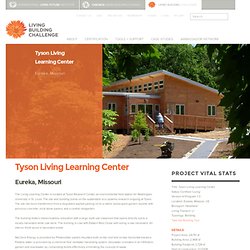 Louis. The site and building builds on the sustainable eco-systems research ongoing at Tyson.