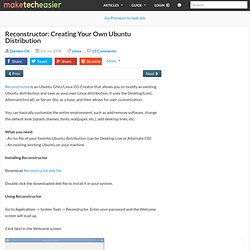 It uses the Desktop(Live), Alternate(Install), or Server disc as a base, and then allows for user customization. You can basically customize the entire environment, such as add/remove software, change the default look (splash, themes, fonts, wallpaper, etc.), add desktop links, etc. What you need: - An iso file of your favorite Ubuntu distribution (can be Desktop Live or Alternate CD) - An existing working Ubuntu on your machine Installing Reconstructor Download Reconstructor deb file Double click the downloaded deb file to install it in your system. Using Reconstructor Go to Applications -> System Tools -> Reconstructor.

Click Next in the Welcome screen Choose the type of installer you are using, Desktop (Live CD) or Alternate (Install CD). The next screen is to setup the working environment. Create Remaster Create Root Create Initial Ramdisk 1. Apt. Funny And Interesting Linux Commands - Part II - MyLinuxBook. In part-I of this article series, we covered many interesting and funny Linux command line utilities. 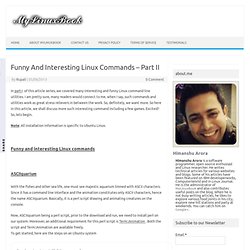 I am pretty sure, many readers would connect to me, when I say, such commands and utilities work as great stress relievers in between the work. So, definitely, we want more. So here in this article, we shall discuss more such interesting command including a few games. Excited? The funny side of Linux command line - MyLinuxBook. Have you ever seen a train running on Linux command line? 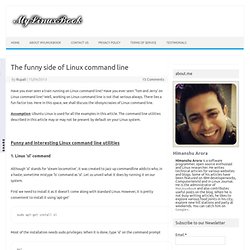 Have you ever seen ‘Tom and Jerry’ on Linux command line? Well, working on Linux command line is not that serious always. There lies a fun factor too. Here in this space, we shall discuss the idiosyncrasies of Linux command line. Assumption: Ubuntu Linux is used for all the examples in this article. What is UPR? Albert Cardona - Tips from an Ubuntu user. Home | lab | find me | science | publications | software | toolbox | site map Centered mostly around Ubuntu, dwm and gnome, which is what I use, and also a few applications such as Blender. 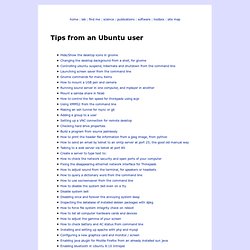 Hide/Show the desktop icons in gnome Do it by launching gconf-editor and navigating the tree to apps - nautilus - preferences and unticking the box for show_desktop, or from a shell: gconftool --type boolean --set /apps/nautilus/preferences/show_desktop false Changing the desktop background from a shell, for gnome. 30 Things I did After Installing Ubuntu 13.04 Raring Ringtail. And here we go again. 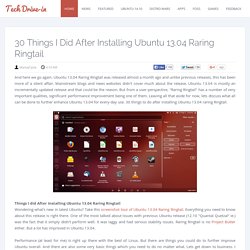 Ubuntu 13.04 Raring Ringtail was released almost a month ago and unlike previous releases, this has been more of a silent affair. Mainstream blogs and news websites didn't cover much about the release. Ubuntu 13.04 is mostly an incrementally updated release and that could be the reason. But from a user-perspective, "Raring Ringtail" has a number of very important qualities, significant performance improvement being one of them. How to install GNOME 3.8 on Ubuntu. If you want to try Ubuntu 13.04, but prefer a different desktop than Unity, Jack Wallen shows you how you can install the latest iteration of GNOME Shell (3.8) and why you should give it a try. 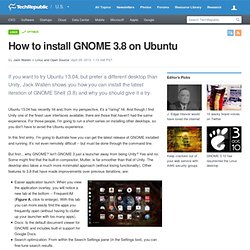 Ubuntu 13.04 has recently hit and, from my perspective, it's a "raring" hit. And though I find Unity one of the finest user interfaces available, there are those that haven't had the same experience. For those people, I'm going to run a short series on installing other desktops, so you don't have to avoid the Ubuntu experience. In this first entry, I'm going to illustrate how you can get the latest release of GNOME installed and running. Fuduntu: An Innovative Old Linux Revisited. By Jack M. 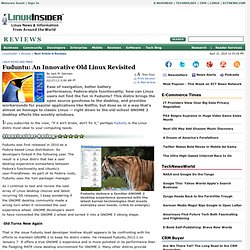 GermainLinuxInsider 02/27/13 5:00 AM PT Ease of navigation, better battery performance, Fedora-style functionality; how can Linux users not find the fun in Fuduntu? This distro brings the open source goodness to the desktop, and provides workarounds for popular applications like Netflix, but does so in a way that's almost an homage to classic Linux -- right down to the old-school GNOME 2 desktop effects like woobly windows.

Memo to Digital Marketers: Be Strategic and Prove the ROI5 ways that e-commerce marketers can support and defend their digital media spends, by showing demonstrable returns and business impact. [Download PDF: 7 pgs | 507k] If you subscribe to the view, "if it ain't broke, don't fix it," perhaps Fuduntu is the Linux distro most ideal to your computing needs. Fuduntu delivers a familiar GNOME 2 desktop experience powered with the latest kernel technologies that meets everyday user needs. Fuduntu was first released in 2010 as a Fedora-based Linux distribution. How to change your privacy settings in Ubuntu's Unity Dash.

Jack Wallen shows you how to protect your privacy by changing a setting in Ubuntu Unity's search dash. 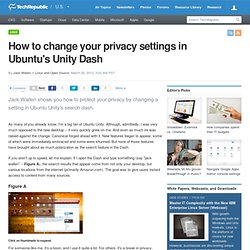 As many of you already know, I'm a big fan of Ubuntu Unity. Although, admittedly, I was very much opposed to the new desktop -- it very quickly grew on me. And even as much ire was raised against the change, Canonical forged ahead with it. New features began to appear, some of which were immediately embraced and some were shunned. But none of those features have brought about as much polarization as the search feature in the Dash. If you aren't up to speed, let me explain. Figure A Click on thumbnails to expand. For someone like me, it's a boon; and I use it quite a lot. Canonical has listened and is working to make the Dash search a feature that will please anyone. Turning off online results. How To Roll Your Own 13.04 Ubuntu Gnome Remix. Well now that news is out in the wild that Ubuntu Gnome 13.04 is now an official Ubuntu derivative, you’re probably wanting to test it out. 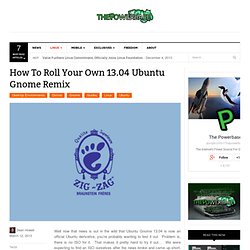 Problem is, there is no ISO for it. That makes it pretty hard to try it out… We were expecting to find an ISO ourselves after the news broke and came up short, and because of that, we decided to simply ‘roll our own’. Seriously, no hacking required. These simple steps will have you up and moving with Ubuntu Gnome 13.04 in no time whatsoever! …And the best part is, you won’t have to install it alongside Unity or any other desktop operating system.

Now that that’s covered, let’s get started! Cleaning up a Ubuntu GNU/Linux system  Sponsored Link If you want to clean your ubuntu machine you need to follow these simple steps to remove all unnecessary junk files. 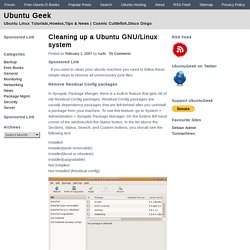