Article_ieti.pdf. Guitartron. Uniduino: Arduino Plugin for Unity - Teaser. Beginner Arduino. The Arduino is a pocket-sized computer (also called a "microcontroller") that you can program and use to control circuits. 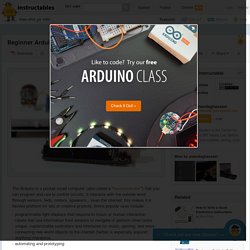 It interacts with the outside word through sensors, leds, motors, speakers... even the internet; this makes it a flexible platform for lots of creative projects. Some popular uses include: - programmable light displays that respond to music or human interaction - robots that use information from sensors to navigate or perform other tasks - unique, customizable controllers and interfaces for music, gaming, and more - connecting real world objects to the internet (twitter is especially popular) - anything interactive - automating and prototyping There are tons of amazing Arduino Projects posted online, here are some of my favorites: Twitter Mood Light by RandomMatrix, a light that changes color depending on what kinds of emotional words are trending on Twitter Nebulophone Synth by Bleep Labs: Singing Plant by Mads Hobye: Polargraph Drawing Machine by Sandy Noble: 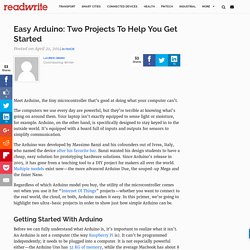 The computers we use every day are powerful, but they’re terrible at knowing what’s going on around them. Your laptop isn’t exactly equipped to sense light or moisture, for example. Arduino, on the other hand, is specifically designed to stay keyed in to the outside world. It’s equipped with a board full of inputs and outputs for sensors to simplify communication. The Arduino was developed by Massimo Banzi and his cofounders out of Ivrea, Italy, who named the device after his favorite bar. Regardless of which Arduino model you buy, the utility of the microcontroller comes out when you use it for “Internet Of Things” projects—whether you want to connect to the real world, the cloud, or both, Arduino makes it easy.

Arduino Projects - The Big List of 100+ Arduino Projects. In this article, we compile all the best and interesting projects we have developed using Arduino. 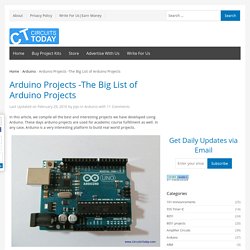 These days arduino projects are used for academic course fulfillment as well. In any case, Arduino is a very interesting platform to build real world projects. List of Arduino Projects Gas Leakage Detector with GSM Module for SMS Alert and Sound Alarm A very interesting arduino project using MQ5 gas sensor and GSM Module. Detect the presence of LPG or other types of gases like CH4, Butane etc with help of MQ5 gas sensor and Arduino. The program in this project also checks for shutdown process – that is – if the gas leak problem has been addressed and eliminated properly. 10 Simple Arduino Projects For Beginners with Code. Awesome!! 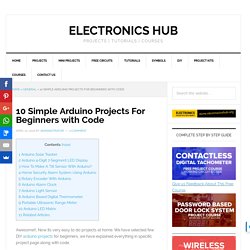 , Now its very easy to do projects at home. We have selected few DIY arduino projects for beginners, we have explained everything in specific project page along with code. Lets see which are the first top 10 projects.. Feel free to leave a comment if you have any questions. Arduino Solar Tracker Description: Sun tracking solar panels can absorb more energy from the Sun than fixed panels. Read more. 10 Simple-But-Fun Projects to Make With Arduino. Advertisement - Continue Reading Below Build a Battery Tester An Arduino can be used to test the life of any battery with less than 5 volts, Boxall says. 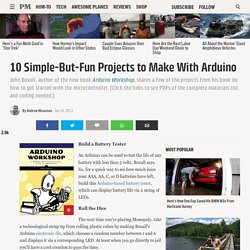 So, for a quick way to see how much juice your AAA, AA, C, or D batteries have left, build this Arduino-based battery tester, which can display battery life via a string of LEDs. Roll the Dice The next time you're playing Monopoly, take a technological steup up from rolling plastic cubes by making Boxall's Arduino electronic die, which chooses a random number between 1 and 6 and displays it via a corresponding LED. Control Traffic Build a working model traffic signal. Stop the Clock.

5 Unique Arduino Projects for Beginners You Can Make with Just a Starter Kit. Advertisement If you’re interested in electronics at all, you’ve heard of the Arduino open-source electronic prototyping platform. 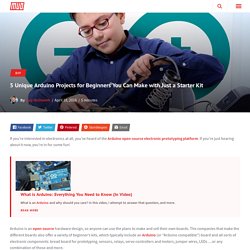 10 Great Arduino Projects for Beginners. Advertisement Completing an Arduino project gives you a sense of satisfaction like no other. 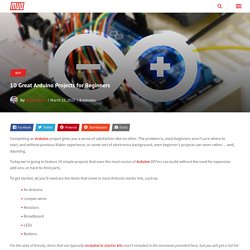 The problem is, most beginners aren’t sure where to start, and without previous Maker experience, or some sort of electronics background, even beginner’s projects can seem rather… well, daunting. Today we’re going to feature 10 simple projects that even the most novice of Arduino DIY’ers can build without the need for expensive add-ons, or hard-to-find parts. To get started, all you’ll need are the items that come in most Arduino starter kits, such as: An ArduinoJumper wiresResistorsBreadboardLEDsButtons For the sake of brevity, items that are typically included in starter kits aren’t included in the overviews provided here, but you will get a full list of items needed on the tutorial itself. Best Arduino Projects - DIY Hacking. 20 Unbelievable Arduino Projects. 20 Projects To Celebrate Arduino Day. In the spirit and celebration of Arduino Day, we’ve compiled a list of some great past projects for your enjoyment. 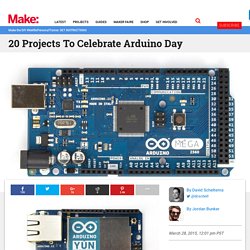 While the Arduino UNO and older Duemilanove are two of the most common Arduino boards, the MEGA and the Yún should not be avoided. The MEGA is much like the UNO, however, it has an expanded number of input and output pins, and is often used to control 3D printers. The Yún is ideal for project where onboard wifi connectivity is a must. Don’t forget that shields –boards that plug directly into the Arduino’s header pins– are a fantastic, rapid way to add functionality to a project.

Not only do shields provide a quick hardware solution, but almost every shield on the market has accompanying software libraries to leverage their unique, individual hardware features. We hope you enjoy the gallery of Arduino projects and make sure to tell us about your latest Arduino based project in the comments. S.M.A.R.T. Ideas. 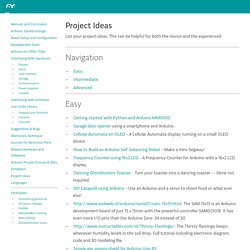 This can be helpful for both the novice and the experienced. Navigation Easy Frequency Counter using 16x2 LCD Dancing Ghostbusters Toaster - Turn your toaster into a dancing toaster -- Slime not required. The SAM 15x15 is an Arduino development board of just 15 x 15mm with the powerful controller SAMD21G18. Intermediate. 10 Awesome Arduino Projects ! - June 2014. Sorting Machine - Skittles and M&Ms ? 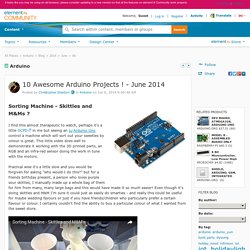 I find this almost therapeutic to watch, perhaps it's a little OCPD in me but seeing an Arduino UnoArduino Uno control a machine which will sort out your sweeties by colour is great. This little video does well to demonstrate it working with the 3D printed parts, an RGB and an infra-red sensor doing the work in tune with the motors.