“Over bronnen sprak en spreek ik niet” GCHQ captured emails of journalists from top international media. GCHQ’s bulk surveillance of electronic communications has scooped up emails to and from journalists working for some of the US and UK’s largest media organisations, analysis of documents released by whistleblower Edward Snowden reveals. 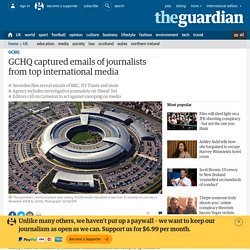 Emails from the BBC, Reuters, the Guardian, the New York Times, Le Monde, the Sun, NBC and the Washington Post were saved by GCHQ and shared on the agency’s intranet as part of a test exercise by the signals intelligence agency. The disclosure comes as the British government faces intense pressure to protect the confidential communications of reporters, MPs and lawyers from snooping. NSA surveillance is a clear threat to journalism in America. By The ConversationThursday, August 7, 2014 11:39 EDT By Philip Di Salvo, Università della Svizzera italiana Digital mass surveillance is having a chilling effect on US democracy, affecting journalists and lawyers, a report from human rights organisations has warned. 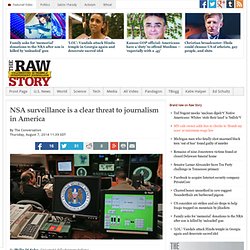 The report, by Human Rights Watch and the American Civil Liberties Union, concludes that some of the most fundamental freedoms are under threat. Minister gaat bronbescherming toch in de wet vastleggen Ivo Barends − 23/11/07, 02:27. BartMos : Al 25 jaar werkt Nederland ... NYT reporter must testify against his own source in leaks investigation, court rules. In a major blow against freedom of the press, a federal appeals court in Virginia has ruled that New York Times journalist James Risen must testify against his own source as part of a leaks investigation led by the US Department of Justice. 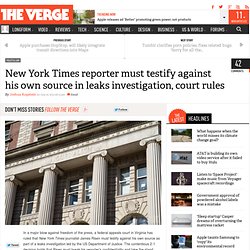 David Gregory tries to read Glenn Greenwald and The Guardian out of the journalism club. Jun.24 On Meet the Press Sunday, host David Gregory said the question, “who is a journalist?” 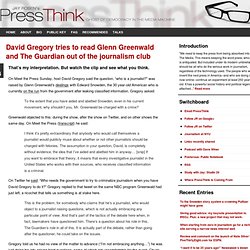 Was raised by Glenn Greenwald’s dealings with Edward Snowden, the 30 year-old American who is currently on the run from the government after leaking classified information. Gregory asked: # Glenn Greenwald Takes Apart David Gregory for Trying to Criminalize Journalism. Youtube: War on Whistleblowers: Free Press and The National Security State. New Film Explores Obama's War on Whistleblowers and the Free Press. Americans love the idea of the whistleblower: one brave person willing to stick their neck out for the greater good, even in the face of severe blowback. 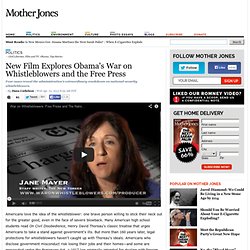 Many American high school students read On Civil Disobedience, Henry David Thoreau's classic treatise that urges Americans to take a stand against government's ills. But more than 160 years later, legal protections for whistleblowers haven't caught up with Thoreau's ideals. Americans who disclose government misconduct risk losing their jobs and their homes—and some are prosecuted under the Espionage Act, a 1917 law originally intended for dealing with foreign spies. That's life for national-security whistleblowers under the Obama Administration, according to a new documentary premiering next week titled War on Whistleblowers: Free Press and the National Security State.

‘Journalistieke bronbescherming in wet’ Wikileaks & Freedom of Speech. Why the WikiLeaks Grand Jury is So Dangerous: Members of Congress Now Want to Prosecute New York Times Journalists Too. For more than a year now, EFF has encouraged mainstream press publications like the New York Times to aggressively defend WikiLeaks’ First Amendment right to publish classified information in the public interest and denounce the ongoing grand jury investigating WikiLeaks as a threat to press freedom. 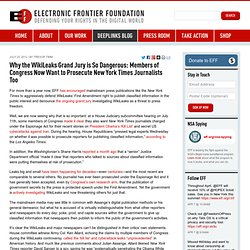 Well, we are now seeing why that is so important: at a House Judiciary subcommittee hearing on July 11th, some members of Congress made it clear they also want New York Times journalists charged under the Espionage Act for their recent stories on President Obama’s ‘Kill List’ and secret US cyberattacks against Iran. During the hearing, House Republicans “pressed legal experts Wednesday on whether it was possible to prosecute reporters for publishing classified information,” according to the Los Angeles Times. RAP NEWS 5: News World Order - the war on journalism (feat. Julian Assange) Bradley Manning Is Facing A 136 Year Jail Sentence.

Attempted Setup of Luke Rudkowski. The bizarre, unhealthy, blinding media contempt for Julian Assange. (updated below - Update II) Earlier this week, British lawyer and legal correspondent for the New Statesman David Allen Green generated a fair amount of attention by announcing that he would use his objective legal expertise to bust what he called "legal myths about the Assange extradition. 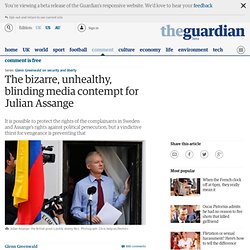 " These myths, he said, are being irresponsibly spread by Assange defenders and "are like 'zombie facts' which stagger on even when shot down. " A letter to my family and friends about the NDAA and me. I am reassured to know that you have my back, and that you have done everything to prevent the US Government from threatening to detain me indefinitely without charge for my work as a journalist and citizen. 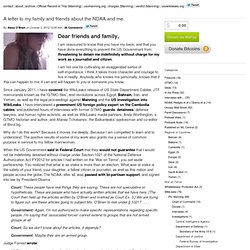 I am not one for cultivating an exaggerated sense of self-importance. I think it takes more character and courage to live in reality. Does Sweden Inflict Trial by Media against Assange? Analysis By Professor Marcello Ferrada de Noli* Contents: i) Introduction. 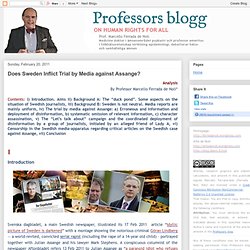 Aims ii) Background A: The “duck pond”. Some aspects on the situation of Swedish journalists, iii) Background B: Sweden is not neutral. Media reports are mainly uniform, iv) The trial by media against Assange: a) Erroneous and information and deployment of disinformation, b) systematic omission of relevant information, c) character assassination, v) The “Let’s talk about” campaign and the coordinated deployment of disinformation by a group of journalists, initiated by an alleged friend of Lady A, vi) Censorship in the Swedish media-apparatus regarding critical articles on the Swedish case against Assange, vii) Conclusion. First interview with @khrafnsson & @suigenerisjen in Sweden's #Almedalen. Evidence of a US judicial vendetta against WikiLeaks activists mounts.

I knew when I put down my name as co-producer of a video, released by WikiLeaks, showing United States soldiers shooting civilians in Baghdad from a helicopter that my life would never be the same. 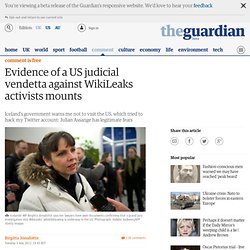 Telling the truth during times of universal deceit might be considered a revolutionary act, but only to those who want to keep us in the dark, not by those who feel compelled to do so. Most of us who expose an inconvenient truth know that we will be attacked for it and ridiculed. And every trick in the book of maintaining power will be applied to silence us. It's no big deal. The beauty of it is that, usually, these attempts gives us a chance to see the actual face of power and to understand, with real-time examples, how healthy or unhealthy our democracies have become.

US calls Assange 'enemy of state' Assange addresses UN event WikiLeaks founder Julian Assange addresses a UN in event in New York via video link from the Ecuadorian embassy in London. 27, 2012 Assange makes UN appearance THE US military has designated Julian Assange and WikiLeaks as enemies of the United States - the same legal category as the al-Qaeda terrorist network and the Taliban insurgency.

Sweden detains Pirate Bay founder in oppressive conditions without charges. My very first week writing regularly at the Guardian generated intense conflict with numerous members of the British media because that happened to be the week when Ecuador granted asylum to Julian Assange (a decision I defended), and - for reasons that warrant sustained study by several academic fields of discipline - very few people generate intense contempt among the British commentariat like Assange does. Europarliament Scolds Visa, MasterCard, PayPal For Killing WikiLeaks Donations; Initiates Regulation. Today, the European Parliament ordered new legislation to regulate credit card companies’ ability to refuse service. This regulation follows the unilateral and rightless cutoff of donations to WikiLeaks, as well as similar trampling on small entrepreneurs.

The Pirate Party took the initiative to the new regulation. It has become an increasingly large problem that Visa, MasterCard, and Paypal control the valve to any money flow on the planet. Today, the European Parliament established this as a clear problem, and initiated regulation of the companies, limiting and strictly regulating their right to refuse service. Underground: The Julian Assange Story (2012) Wikileaks : It is admitted by...

Cracking the First Amendment: USG builds conspiracy into the trial of Bradley Manning. For over a year, in a soundproofed courtroom located in the confined wasteland of Fort Meade, the U.S. Army is prosecuting the most consequential and unprecedented leak trial of the digital age in secrecy and managed obscurity. A twenty-five year old whistleblower, Private First Class Manning is charged with indirectly aiding Al Qaeda for allegedly providing information to WikiLeaks, who published the information on the Internet. Prosecutors have recommended life in prison; but the presiding military judge has the authority to impose the death penalty. At issue in the Manning trial is the danger posed to democracy and the rule of law by the government's expanding control over information in the digital age; and the use of prejudicial prosecutions that turn whistle-blowing into treason and journalism into espionage or an act of war.

The Dangerous Logic of the Bradley Manning Case. After 1,000 days in pretrial detention, Private Bradley Manning yesterday offered a modified guilty plea for passing classified materials to WikiLeaks. Chris Hedges: We Are Bradley Manning - Chris Hedges' Columns. We Are Bradley Manning. NYT: The Danger of Suppressing the Leaks. New Evidence to Be Introduced Against Bradley Manning. Freepressfoundation - Providence. NYT: Bill Keller Private Manning’s Confidant. Daniel Ellsberg Slams Bill Keller Over His New York Times Op-Ed, "Private Manning's Confidant" Daniel Ellsberg: A Salute to Bradley Manning, Whistleblower, As We Hear His Words for the First Time. Today, the Freedom of the Press Foundation, an organization that I co-founded and of which I'm on the board, has published an audio recording of Bradley Manning's speech to a military court from two weeks ago, in which he gives his reasons and motivations behind leaking over 700,000 government documents to WikiLeaks.