It takes a Quiz Show Host. The Economist: Erdogan Democrat or Sultan? Orhan Pamuk on the Protests in Istanbul. In order to make sense of the protests in Taksim Square, in Istanbul, this week, and to understand those brave people who are out on the street, fighting against the police and choking on tear gas, I’d like to share a personal story. 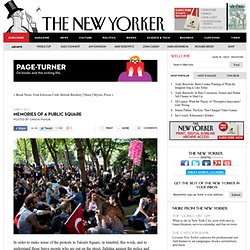 In my memoir, “Istanbul,” I wrote about how my whole family used to live in the flats that made up the Pamuk apartment block, in Nişantaşı. In front of this building stood a fifty-year-old chestnut tree, which is thankfully still there. Yaseminnie : Dear world,we are not upset... Protesters #OccupyGezi to save Istanbul park. A Turkish riot policeman uses tear gas as people protest against the destruction of trees in a park brought about by a pedestrian project, in Taksim Square in central Istanbul May 28, 2013. 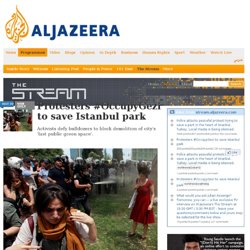 REUTERS/Osman Orsal Protesters are occupying Istanbul's Gezi Park to prevent a demolition of what many are calling the city's last green public space. Hurriyet Daily News reported that early Thursday morning riot police set fire to several tents and used tear gas and pepper spray attempting to force activists out of the park. The Gezi Park Occupation: Confronting Authoritarian Neoliberalism – For the Desk Drawer. This is the ninth addition to the Thesis Pieces series made up of contributions from my past and present PhD research students. 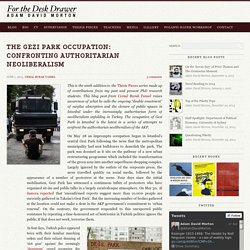 Het rommelt in Istanbul en omstreken - NOS op 3. #OccupyGezi: Live From the Protests in Turkey. Justin Wedes of Occupy Wall Street is reporting from the front lines of the protests in Turkey for ANIMAL all week. 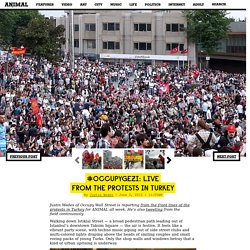 He’s also tweeting from the field continuously. Walking down Istiklal Street — a broad pedestrian path leading out of Istanbul’s downtown Taksim Square — the air is festive. It feels like a vibrant party scene, with techno music piping out of side street clubs and multi-colored lights draping above the heads of smiling couples and small roving packs of young Turks. Only the shop walls and windows betray that a kind of urban uprising is underway. When the police forced back the protesters from Taksim’s Gezi Park last week, they took to the walls with their anger.

The prospects for the protesters didn’t look as promising last Friday: beat back by rounds of tear gas, water cannons, and pepper spray bombs, young people took to social media to share images that ricocheted across the globe on the hashtag #OccupyGezi. Theoryandpraxis20.tumblr. ScienceGuide: Many inconvenient truths in Turkey. EU should listen to demonstrators, and engage not estrange Turkey.

Since the demonstrations broke out in Turkey last week, an unprecedented number of articles have been published highlighting the deeper causes of people’s grievances. 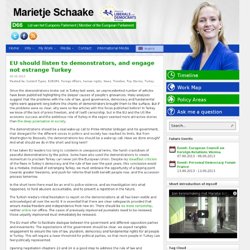 Many analyses suggest that the problems with the rule of law, good governance, democracy and fundamental rights were apparent long before the chants of demonstrators brought them to the surface. But if the problems were so clear, why were so few articles with this focus published before? In Turkey we know of the lack of press freedom, and of (self) censorship, but in the EU and the US the economic success and the ambitious role of Turkey in the region seemed more attractive stories than the deep polarization in society . The demonstrations should be a real wake-up call to Prime Minister Erdogan and his government, that disregard for the different voices in politics and society has reached its limits.

But from Washington to Brussels, the demonstrations too should be a wake-up call. 11 foreign nationals detained for alleged role in Gezi Park protests. Justinwedes : Now there are reports of foreign... Bir Gezi Parkı Direnişi Belgeseli: Istanbul Rising. 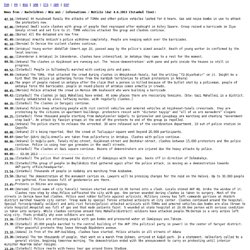 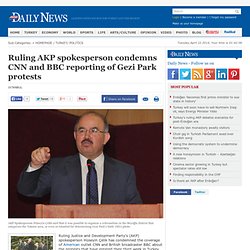 DHA photo Ruling Justice and Development Party’s (AKP) spokesperson Hüseyin Çelik has condemned the coverage of American outlet CNN and British broadcaster BBC about the protests that have entered their third week in Turkey. “CNN International and BBC have shown [the protests] as if there were hundreds of funerals. [Syrian President] Bashar al-Assad is slaughtering his people, but there is no coverage on Syria,” Çelik, who is also AKP’s deputy head responsible for media issues, told private broadcaster NTV late on June 11. Çelik also called on protesters to stop their demonstrations before things become “unpleasant.” Assemblies emerging in Turkey: a lesson in democracy #occupygezi. The protesters are starting to counter-pose their own direct democracy to the sham of a democracy proposed by Erdogan’s authoritarian neoliberal state. 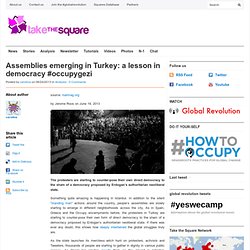 Something quite amazing is happening in Istanbul. In addition to the silent “standing man” actions around the country, people’s assemblies are slowly starting to emerge in different neighborhoods across the city. As in Spain, Greece and the Occupy encampments before, the protesters in Turkey are starting to counter-pose their own form of direct democracy to the sham of a democracy proposed by Erdogan’s authoritarian neoliberal state. If there was ever any doubt, this shows how deeply intertwined the global struggles truly are. As the state launches its merciless witch hunt on protesters, activists and Tweeters, thousands of people are starting to gather in dignity in various public spaces. These meetings have nothing to do with Taksim Solidarity any more.

What, then, is real democracy? But there is something more. The Twitterization of the Gezi Park protests <br><i>by</i> <b>Louis Fishman*</b> A protester gestures to riot policemen as he walks in front of a burning barricade during clashes in Taksim Square in İstanbul on June 11. 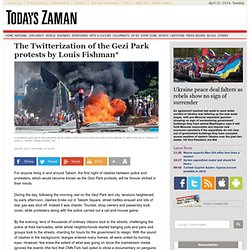