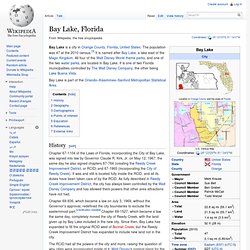 History[edit] Chapter 67-1104 of the Laws of Florida, incorporating the City of Bay Lake, was signed into law by Governor Claude R. Kirk, Jr. on May 12, 1967, the same day he also signed chapters 67-764 (creating the Reedy Creek Improvement District, or RCID) and 67-1965 (incorporating the City of Reedy Creek). It was and still is located fully inside the RCID, and all its duties have been taken care of by the RCID. As fully described in Reedy Creek Improvement District, the city has always been controlled by the Walt Disney Company and has allowed them powers that other area attractions have not had. Lake Buena Vista, Florida. Lake Buena Vista is a city in Orange County, Florida, United States. 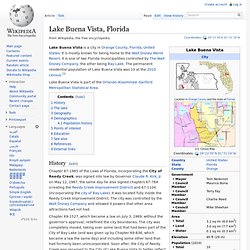 It is mostly known for being home to the Walt Disney World Resort. It is one of two Florida municipalities controlled by The Walt Disney Company, the other being Bay Lake. The permanent residential population of Lake Buena Vista was 10 at the 2010 census.[3] Lake Buena Vista is part of the Orlando–Kissimmee–Sanford Metropolitan Statistical Area.

Therefore, a conflict of interest can be discovered and voluntarily defused before any corruption occurs. A widely used definition is: "A conflict of interest is a set of circumstances that creates a risk that professional judgement or actions regarding a primary interest will be unduly influenced by a secondary interest. Disney's Hidden Hand in the Anaheim City Council Race - Voice of OC. When Anaheim City Council candidate Steve Chavez Lodge told a television reporter last month that he had only received the maximum allowable $1,800 campaign contribution from the Disneyland Resort — perhaps the city’s most influential political player — the comment was accurate. 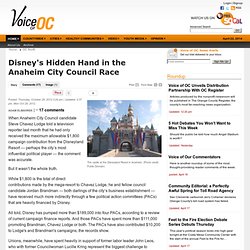 But it wasn’t the whole truth. While $1,800 is the total of direct contributions made by the mega-resort to Chavez Lodge, he and fellow council candidate Jordan Brandman — both darlings of the city’s business establishment — have received much more indirectly through a few political action committees (PACs) that are heavily financed by Disney. All told, Disney has pumped more than $189,000 into four PACs, according to a review of current campaign finance reports. And those PACs have spent more than $111,000 promoting Brandman, Chavez Lodge or both. ReovanThesis(pdf) Theme Park in the City: Disneyland and the Aesthetic of the ‘Anaheim Resort’ Disneyland Resort, Anaheim, CA, United States. Anaheim. Gebruikers van schermlezers: klik hier voor eenvoudige HTML Nieuw! 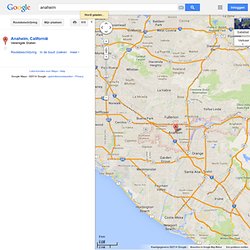 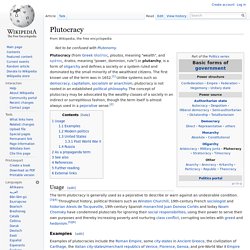 The first known use of the term was in 1652.[1] Unlike systems such as democracy, capitalism, socialism or anarchism, plutocracy is not rooted in an established political philosophy. City of London. The City of London is a city within London. 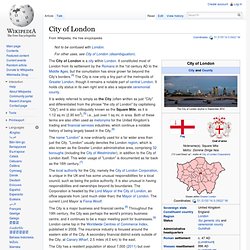 It constituted most of London from its settlement by the Romans in the 1st century AD to the Middle Ages, but the conurbation has since grown far beyond the City's borders.[4] The City is now only a tiny part of the metropolis of Greater London, though it remains a notable part of central London. It holds city status in its own right and is also a separate ceremonial county. It is widely referred to simply as the City (often written as just "City" and differentiated from the phrase "the city of London" by capitalising "City") and is also colloquially known as the Square Mile, as it is 1.12 sq mi (2.90 km2),[5] i.e., just over 1 sq mi, in area. Disney takes stand on Anaheim elections. Disney takes stand on Anaheim elections Tourists blend in with a dozen protesters on a recent Saturday in front of Disneyland. 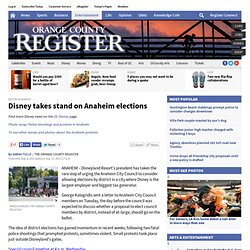 ANAHEIM – Disneyland Resort's president has taken the rare step of urging the Anaheim City Council to consider allowing elections by district in a city where Disney is the largest employer and biggest tax generator. George Kalogridis sent a letter to Anaheim City Council members on Tuesday, the day before the council was expected to discuss whether a proposal to elect council members by district, instead of at-large, should go on the ballot. The idea of district elections has gained momentum in recent weeks, following two fatal police shootings that prompted protests, sometimes violent. Small protests took place just outside Disneyland's gates. Special council meeting at 4 p.m. The Two Faces of Disney: word vs. deed on Anaheim Districting. Maybe I was a weird kid, but I never liked or trusted Disney. 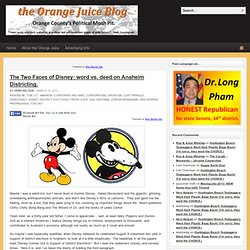 Hated Disneyland and the gigantic, grinning, overbearing anthropomorphic animals, and didn’t like Disney’s films or cartoons. They just gave me the feeling, even as a kid, that they were lying to me, covering up important things about life. Much preferred Chitty Chitty Bang Bang and The Wizard of Oz, and the books of Lewis Carroll. Years later, as a thirty-year old father, I came to appreciate… well, at least Mary Poppins and Dumbo. And as a tolerant American I realize Disney brings joy to millions, employment to thousands, and contributes to Anaheim’s economy although not nearly as much as it could and should. Anaheim Council Majority shoots down everything that is good except puppies.

The landscape of Murray/Eastman/Sidhu fearmongering. 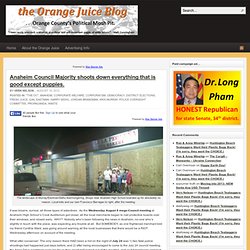 Shops near Anaheim High School boarded up for absolutely no reason. Local kids and our own Francisco Barragan to right, after the meeting. It was bizarre, surreal, all those types of adjectives. As the Wednesday August 8 mega-Council meeting at Anaheim High School’s Cook Auditorium got closer, all the local merchants began to nail protective boards over their windows, and closed early.

NYT Photos Don't Do Justice to Police Presence at Anaheim Protests. Credit: New York Times A picture is worth a thousand words is often used as short hand for the power of an image to convey information and elicit emotion. US policing: Institutionalising brutality? - Inside Story Americas. Extreme police tactics are not a new phenomenon in the US. But in the age of social media, police violence, such as the shooting of unarmed people and the use of pepper spray and taser guns, are being documented for the world to see. Occupy protesters throughout the country felt the full force of police tactics - many were subject to violent arrest. Perhaps the most controversial example was at the University of California, Davis (UC Davis) where peaceful protesters were pepper sprayed last November.

JackVFoster : Why is none on this stuff going... Protest Anaheim Police Brutality at Disneyland 7/28/12 and 7/29/12. Activists mobilize nationwide to protest Anaheim police shootings. Activists nationwide are mobilizing online to organize marches and demonstrations in solidarity with Anaheim protesters in the wake of two deadly officer-involved shootings that have rocked the city. The killings of two Latino men sparked several days of heated protests, including one Tuesday night that exploded into violence after police and hundreds of protesters clashed by City Hall and in adjacent neighborhoods. The shootings of Manuel Angel Diaz, 25, and Joel Acevedo, 21, have laid bare the economic divide between the city's pockets of glitz and affluence and the less-prosperous Latino neighborhoods, where residents have voiced outrage over police conduct.

Photos: Protest against Anaheim police shootings That anger has struck a chord from from Oakland to New York, where solidarity protests are planned for Friday and into the weekend. The events are being organized on Facebook and Twitter. Chick-fil-A caught in political firestorm over gay marriage L.A.' Anaheim protests reflect deep divisions in the city. Daisy Gonzalez, 16, the niece of Manuel Angel Diaz, who was killed Saturday,… (Patrick T. Fallon / Los Angeles…) DN! Police Brutality in Anaheim Sparks Outrage After 2 Latinos Shot Dead and Demonstrators Attacked. AMY GOODMAN: Residents of Anaheim, California—home to Disneyland—are protesting after police shot and killed an unarmed man on Saturday.

He was the seventh to die in an officer-involved shooting this year. A witness told the Associated Press an unmarked police car approached several men around 4:00 p.m. as they stood in an alley. Two officers say 25-year-old Manuel Angel Diaz was among those who ran when they ordered people to stop. Occupy Poster No. 6: Occupy Disneyland. AlJazeera Fault lines Anaheim: A tale of two cities. Anaheim Police Win Secrecy On Controversial Manuel Diaz Killing Files. The Anaheim Police Department and an officer who killed an unarmed, 25-year-old gangster in July 2012, do not want the public to see the contents of Orange County District Attorney's office investigation files about the incident. U.S. District Court Judge James V.

Anaheim's changes not enough for Latino community. Anaheim resident Jesse Murillo, left, was among about 50 people protesting… (Glenn Koenig / Los Angeles…) Gustavo's Latest "Orange County Line" Commentary for KCRW: On Anaheim a Year after its Summer of Rage! #OccupyDisney is a great resource for...