Barclays Informed New York Fed of Problems With Libor in 2007. 9:27 p.m. | Updated The Federal Reserve Bank of New York learned in April 2008, as the financial crisis was brewing, that at least one bank was reporting false interest rates. 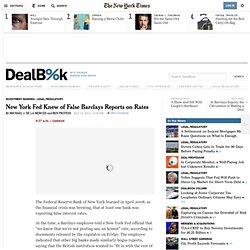 At the time, a Barclays employee told a New York Fed official that “we know that we’re not posting um, an honest” rate, according to documents released by the regulator on Friday. Behind the Libor Scandal - Graphic. TheYoungTurks : LIBOR Scandal = The Bankin... Griftopia. Matt Taibbi - Griftopia. Taibbi, Spitzer: LIBOR, Too Big To Fail, and the 'Upside-Down World' of Wall Street. Through the looking glass? Spitzer and Taibbi contemplate the 'upside-down world' of Wall Street - Viewpoint with Eliot Spitzer. To Our Faithful Current.com Users: Current's run has ended after eight exciting years on air and online.

The Current TV staff has appreciated your interest, support, participation and unflagging loyalty over the years. Your contributions helped make Current.com a vibrant place for discussing thousands of interesting stories, and your continued viewership motivated us to keep innovating and find new ways to reflect the voice of the people. We now welcome the on-air and digital presence of Al Jazeera America, a new news network committed to reporting on and investigating real stories affecting the lives of everyday Americans in every corner of the country. Matt Taibbi: Libor Rate-Fixing Scandal "Biggest Insider Trading You Could Ever Imagine" Matt Taibbi Explains Wall Street’s "License to Steal," Offshore Tax Havens and Private Equity Firms.

In part two of our interview with Matt Taibbi, he describes recent Wall Street scandals — including a decade-long Wall Street scandal that drained money from every county and state in the United States — and notes not a single bank executive has faced individual consequences. 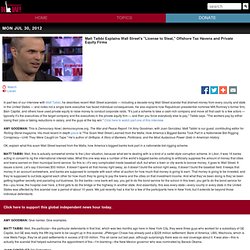 He also explains how Republican presidential nominee Mitt Romney’s former firm, Bain Capital, and others have used private equity to raise money to conduct corporate raids. "It’s just a scheme to take a cash-rich company and move all that cash to a few actors — typically it’s the executives of the target company and the executives in the private equity firm — and then you force everybody else to pay," Taibbi says. "The workers pay by either losing their jobs or taking reductions in salary, and the guys at the top win. " Click here to watch part one of this interview. AMY GOODMAN: This is Democracy Now! Click here to support this global independent news hour today. AMY GOODMAN: Give names. FT: Tricky lessons for the players in Liborgate. Beyond Barclays: Laying out the Libor Investigations. Last week, the British bank Barclays was slapped with $450 million in fines and penalties for manipulating information used to set a critical interest rate. 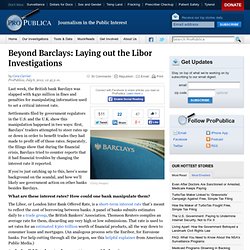 Settlements filed by government regulators in the U.S. and the U.K. show this manipulation happened in two ways: first, Barclays’ traders attempted to steer rates up or down in order to benefit trades they had made to profit off of those rates. Separately, the filings show that during the financial crisis, Barclays tried to counter reports that it had financial troubles by changing the interest rate it reported. Manchester Capitalism: A View From The North: Banks: A Loose Federation Of Money Making Franchises.

The LIBOR fixing affair continues to throw up new information and insights which are mostly entirely predictable. Consider two of last week’s front page news stories: Banks Turn on One Another in Libor Scandal. So here come the banks finger-pointing on the Libor scandal. 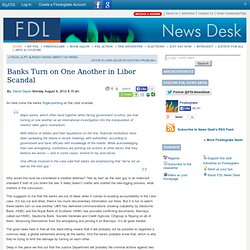 Major banks, which often band together when facing government scrutiny, are now turning on one another as an international investigation into the manipulation of interest rates gains momentum.With billions of dollars and their reputations on the line, financial institutions have been spreading the blame in recent meetings with authorities, according to government and bank officials with knowledge of the matter. While acknowledging their own wrongdoing, institutions are pointing out actions at other banks that they believe are worse — and in some cases, extend to top executives.One official involved in the case said that banks are emphasizing that “we’re not as bad as the next guy.” Why would this ever be considered a credible defense? 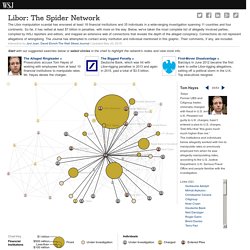 Pleaded not guilty to U.K. charges; hasn’t entered a plea to U.S. charges. Told WSJ that “this goes much much higher than me.”The institutions and individuals below allegedly worked with him to manipulate rates or previously employed him when he was allegedly manipulating rates, according to the U.S. Justice Department, U.K. Serious Fraud Office and people familiar with the investigation.