Who creates money ? demise of democratic control ? Who owns our debt ? Financial Supervision & Central Banking: Improvements backfired. Bank Charter Act 1844. ReThink Money. Conflict of interest. Insider trading = inside info wikipedia. The authors of one study claim that illegal insider trading raises the cost of capital for securities issuers, thus decreasing overall economic growth.[1] However, some economists have argued that insider trading should be allowed and could, in fact, benefit markets.[2] Noted economist Milton Friedman has been quoted as saying "You want more insider trading, not less".[3] Trading by specific insiders, such as employees, is commonly permitted as long as it does not rely on material information not in the public domain. 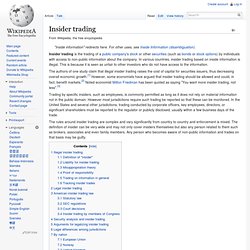 However most jurisdictions require such trading be reported so that these can be monitored. In the United States and several other jurisdictions, trading conducted by corporate officers, key employees, directors, or significant shareholders must be reported to the regulator or publicly disclosed, usually within a few business days of the trade. The rules around insider trading are complex and vary significantly from country to country and enforcement is mixed. 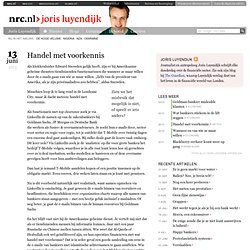 January 22, 2013 FRONTLINE investigates why Wall Street’s leaders have escaped prosecution for any fraud related to the sale of bad mortgages. 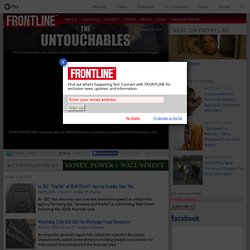 Is SEC “Fearful” of Wall Street? Agency Insider Says Yes April 8, 2014, 3:15 pm ET · by Jason M. Breslow An SEC trial attorney used a recent retirement speech to criticize the agency for being too “tentative and fearful” in confronting Wall Street following the 2008 financial crisis. The Untouchables: How the Obama administration protected Wall Street from prosecutions.

(updated below - Update II) PBS' Frontline program on Tuesday night broadcast a new one-hour report on one of the greatest and most shameful failings of the Obama administration: the lack of even a single arrest or prosecution of any senior Wall Street banker for the systemic fraud that precipitated the 2008 financial crisis: a crisis from which millions of people around the world are still suffering. 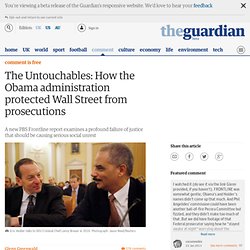 What this program particularly demonstrated was that the Obama justice department, in particular the Chief of its Criminal Division, Lanny Breuer, never even tried to hold the high-level criminals accountable. What Obama justice officials did instead is exactly what they did in the face of high-level Bush era crimes of torture and warrantless eavesdropping: namely, acted to protect the most powerful factions in the society in the face of overwhelming evidence of serious criminality. "In 2009, Wall Street bankers were on the defensive, worried they could be held criminally liable for fraud. Cameron family fortune made in tax havens. David Cameron's father ran a network of offshore investment funds to help build the family fortune that paid for the prime minister's inheritance, the Guardian can reveal. 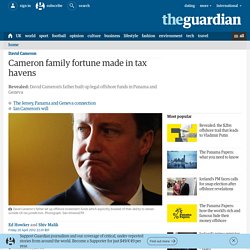 Though entirely legal, the funds were set up in tax havens such as Panama City and Geneva, and explicitly boasted of their ability to remain outside UK tax jurisdiction. At the time of his death in late 2010, Ian Cameron left a fortune of £2.74m in his will, from which David Cameron received the sum of £300,000.

Nixon-Schock. The US Invaded Iraq Because It Wouldn’t Have Survived Otherwise. While the US invasion of Iraq about a decade ago was based on public-facing lies about nonexistent weapons arsenals, the underlying reasons for the invasion were much more dire. 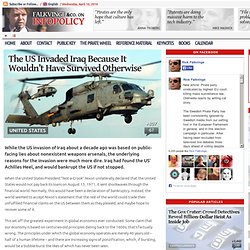 Iraq had found the US’ Achilles Heel, and would bankrupt the US if not stopped. When the United States President “Not-a-Crook” Nixon unilaterally declared that the United States would not pay back its loans on August 15, 1971, it sent shockwaves through the financial world. Normally, this would have been a declaration of bankruptcy. 97% Owned - Positive Money Cut. The Failure of Free-Market Finance by Adair Turner. 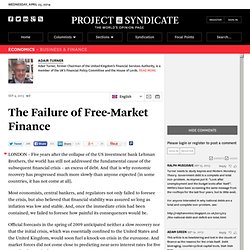 Click to hide this space LONDON – Five years after the collapse of the US investment bank Lehman Brothers, the world has still not addressed the fundamental cause of the subsequent financial crisis – an excess of debt. And that is why economic recovery has progressed much more slowly than anyone expected (in some countries, it has not come at all). Most economists, central bankers, and regulators not only failed to foresee the crisis, but also believed that financial stability was assured so long as inflation was low and stable.

List of World’s Largest Creditor and Debtor Nations. Since 2006 The International Monetary Fund’s Balance of Payment statistics have been uploaded into a neat online database accessible through its website. 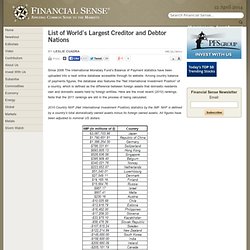 Among country balance of payments figures, the database also features the “Net International Investment Position” of a country, which is defined as the difference between foreign assets that domestic residents own and domestic assets held by foreign entities. Here are the most recent (2010) rankings. Note that the 2011 rankings are still in the process of being calculated. 2010 Country NIIP (Net International Investment Position) statistics by the IMF. 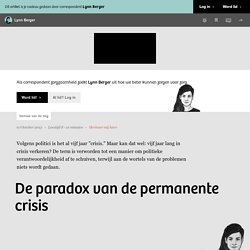 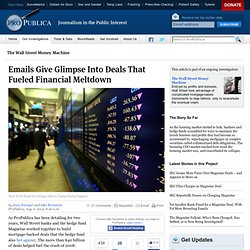 The more than $40 billion of deals helped fuel the crash of 2008. Now, recently collected emails from bankers and a Magnetar executive involved in some of the deals appear to shed new light on how they did it. Fiduciaries threatened with a loss of business if they didn't cooperate. Prime movers behind a billion-dollar deal suggesting they need to keep their actions hidden. It's all portrayed in the emails, which were included as part of a civil lawsuit [2] against Magnetar filed in New York's Southern District Court in late June.

The suit was brought by Italian bank Intesa San Paolo, which lost $180 million on an investment linked to a mortgage bond deal put together by Magnetar and French bank Calyon. Intesa is suing all three players, Magnetar, Calyon and Putnam.

Although the corporation tax bill of zero is legal, it is not likely to prove popular with the public following backlashes against Starbucks and Amazon. Lobbyismus: Unter Steinbrück schrieben Banken selbst das Steuergesetz. Staat verliest op steun aan banken. Donderdag 3 jan 2013, 12:06 (Update: 03-01-13, 17:21) The cancers at the heart of the banking system. Written by Positive Money on . “The cancers at the heart of the banking system are explicit and implicit deposit insurance, destabilising the system, creating financial crises and creating huge implicit government subsidies to bankers’ salaries, which causes damage to public confidence in the system and encourages harmful regulation and taxes”, according to the Telegraph, 20th Aug 2013 The author of the article, Andrew Lilico, describes how the modern banking was formed in Britain in the early 19th century in two, quite distinct, forms – retail banks (where depositors lend money to the bank, which the bank then uses to support lending) and “savings banks” (deposits in savings banks were not permitted to be used to support loans).