Ulva. Ulva lactuca. Acetabularia. Acetabularia is a genus of green algae, specifically of the Polyphysaceae family,[2] Typically found in subtropical waters, Acetabularia is a single-celled organism, but gigantic in size and complex in form, making it an excellent model organism for studying cell biology.[3] In form, the mature Acetabularia resembles the round leaves of a nasturtium, is 0.5 to 10 cm tall and has three anatomical parts: a bottom rhizoid that resembles a set of short roots; a long stalk in the middle; and a top umbrella of branches that may fuse into a cap. 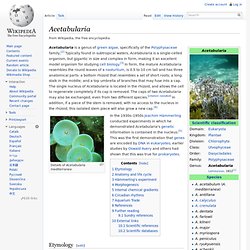 The single nucleus of Acetabularia is located in the rhizoid, and allows the cell to regenerate completely if its cap is removed. The caps of two Acetabularia may also be exchanged, even from two different species. [citation needed] In addition, if a piece of the stem is removed, with no access to the nucleus in the rhizoid, this isolated stem piece will also grow a new cap.[4] Details of Acetabularia mediterranea Etymology[edit] Morphogenesis[edit] Acetabularia crenulata. Scenedesmus. Taxonomy[edit] Currently, there are 74 taxonomically accepted species of Scenedesmus.[1] Additionally, several subgenera have been identified, but vary according to the source. 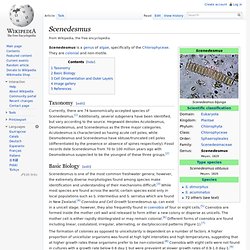 Hegewald denotes Acutodesmus, Desmodesmus, and Scenedesmus as the three major categories. Acutodesmus is characterized as having acute cell poles, while Desmodesmus and Scenedesmus have obtuse/truncated cell poles (differentiated by the presence or absence of spines respectively). Fossil records date Scenedesmus from 70 to 100 million years ago with Desmodesmus suspected to be the youngest of these three groups.[2] Basic Biology[edit] The formation of colonies as opposed to unicellularity is dependent on a number of factors. Cell Ornamentation and Outer Layers[edit] The exterior ornamentation is highly variable within the Scenedesmus genus; however, Staehelin et al. characterized two species in detail: S. pannonicus and S. longus. 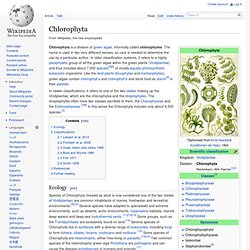 The name is used in two very different senses, so care is needed to determine the use by a particular author. In older classification systems, it refers to a highly paraphyletic group of all the green algae within the green plants (Viridiplantae) and thus includes about 7,000 species[5][6] of mostly aquatic photosynthetic eukaryotic organisms. Like the land plants (bryophytes and tracheophytes), green algae contain chlorophyll a and chlorophyll b and store food as starch[5] in their plastids. In newer classifications, it refers to one of the two clades making up the Viridiplantae, which are the chlorophytes and the streptophytes. The streptophytes often have two classes ascribed to them, the Charophyceae and the Embryophyceae.[7][8] In this sense the Chlorophyta includes only about 4,300 species.[3] Ecology[edit] Classifications[edit] Leliaert et al. 2012[edit] Viridiplantae Chlorophyta core chlorophytes Ulvophyceae.