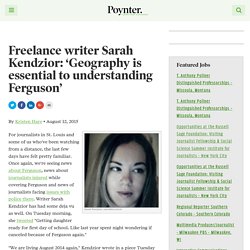 This is what white people can do to support #BlackLivesMatter. A “Black Lives Matter” protest in Baltimore last December (Amy Davis/Baltimore Sun) One year ago this coming Sunday, Michael Brown was shot and killed in Ferguson, Mo. 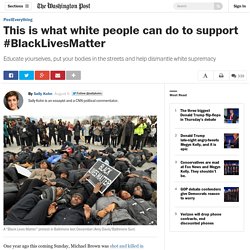 Since then, the collective anger and devastation of the black community has become a powerful national movement. Black Lives Matter has worked to transform everything from social media to social consciousness. In his searing new book, “Between the World and Me,” Ta-Nehisi Coates implies that it’s not his job — or, by extension the job of other black voices or leaders — to coach white folks, let alone worry about their feelings. Women and Black Lives Matter: Marcia Chatelain. In recent months, the deaths of Michael Brown, Eric Garner, Freddie Gray, and others have mobilized an unprecedented mass movement against police brutality and racism that we now know as Black Lives Matter. 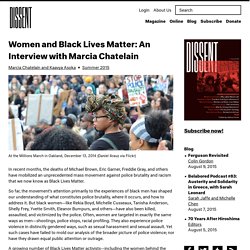 So far, the movement’s attention primarily to the experiences of black men has shaped our understanding of what constitutes police brutality, where it occurs, and how to address it. But black women—like Rekia Boyd, Michelle Cusseaux, Tanisha Anderson, Shelly Frey, Yvette Smith, Eleanor Bumpurs, and others—have also been killed, assaulted, and victimized by the police. Often, women are targeted in exactly the same ways as men—shootings, police stops, racial profiling. They also experience police violence in distinctly gendered ways, such as sexual harassment and sexual assault. Yet such cases have failed to mold our analysis of the broader picture of police violence; nor have they drawn equal public attention or outrage. How are black women affected by police brutality? Ferguson’s Inheritance. As the one-year anniversary of Michael Brown’s killing rapidly approaches, within days of the fiftieth anniversary of the Watts Rebellion, we are invited to reflect on the connection between state repression and African-American mobilization past and present. 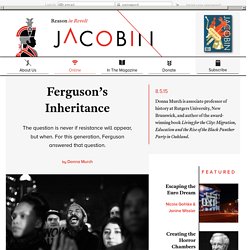 Each generation has a moment when its members share an instance of collective experience that is forever etched into their memory. For the Civil Rights Movement and Black Power generation, it was unquestionably the open-casket funeral of Emmett Till. The disfigured remains of this fourteen-year-old boy became a mirror in which black youth witnessed their most vulnerable selves. The sight was so excruciating that it helped catalyze direct action protest from rural Alabama to the streets of Oakland for nearly a decade and a half. The precise calculus of generation is elusive. Police left Michael Brown’s body in the street for nearly five hours, immersed in his own blood. Excuse me… Etre noir aux Etats-Unis : les craintes d’un correspondant britannique (entre autres) 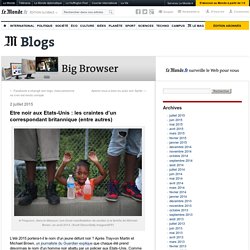 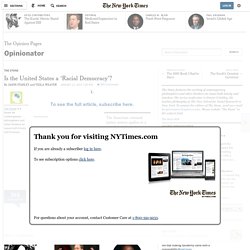 Plato’s “Republic” is the wellspring from which all subsequent Western philosophy flows, and political philosophy is no exception. According to Plato, liberty is democracy’s greatest good; it is that which “in a democratic city you will hear … is the most precious of all possessions.” Subsequently, two notions of liberty emerged in the writings of democratic political philosophers. The dispute about which of these two notions of liberty is most central to human dignity is at the heart of Western philosophy. Both are central to American democracy.

A white cop kills an unarmed black man. A grand jury, after hearing all the evidence from a prosecutor, declines to indict the officer. Protesters take to the streets demanding justice. No, this isn’t the shooting death of Michael Brown in Ferguson, Missouri. It’s the death of Eric Garner in New York City—and the details surrounding it are even more appalling. Ferguson Officer Is Not Indicted. Ferguson: Boarded-Up St Louis Suburb Awaits Darren Wilson Grand Jury Decision. Residents of Ferguson, Missouri, are bracing themselves for the grand jury verdict on the shooting of an unarmed black teen by a white policeman. 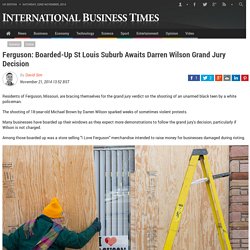 The shooting of 18-year-old Michael Brown by Darren Wilson sparked weeks of sometimes violent protests. Many businesses have boarded up their windows as they expect more demonstrations to follow the grand jury's decision, particularly if Wilson is not charged. Among those boarded up was a store selling "I Love Ferguson" merchandise intended to raise money for businesses damaged during rioting. Paul Morris boards up windows at the "I Love Ferguson" headquarters in preparation for the grand jury verdict(Kate Munsch/Reuters) A man spray-paints the word "Open" after boarding up a business in Ferguson(Adrees Latif/Reuters) Douchebag: The White Racial Slur We’ve All Been Waiting For — Human Parts. On Shouting White Racial Slurs in Public I am a white, middle class male professor at a big, public university, and every year I get up in front of a hundred and fifty to two hundred undergraduates in a class on the history of race in America and I ask them to shout white racial slurs at me. 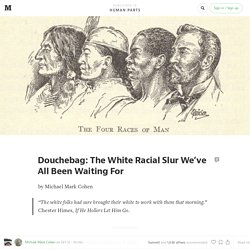 The results are usually disappointing. First of all, everyone knows that saying anything overtly racist in front of strangers is totally taboo. So the inhibitions to participation in this insane activity are already pretty great. Even so, most of these kids are not new to conversations about race; the majority of them are students of color, including loads of junior college transfers, student parents, vets, and a smattering of white kids, mostly freshmen. Hundreds March in Ferguson, Descending on University Campus. Photo ST. 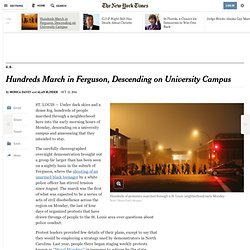 LOUIS — Under dark skies and a dense fog, hundreds of people marched through a neighborhood here into the early morning hours of Monday, descending on a university campus and announcing that they intended to stay. The carefully choreographed overnight demonstration brought out a group far larger than has been seen on a nightly basis in the suburb of Ferguson, where the shooting of an unarmed black teenager by a white police officer has stirred tension since August. The march was the first of what was expected to be a series of acts of civil disobedience across the region on Monday, the last of four days of organized protests that have drawn throngs of people to the St. Louis area over questions about police conduct. A Ferguson, coupables d’être pauvres. Let’s be honest, we can’t be colorblind because America is not post-racial.

It is a matter of color. Photo credit: Reuters/Adrees Latif As outrage over the killing of Michael Brown in Ferguson, Missouri further develops—around police brutality, First Amendment rights, and memories of a Civil Rights-era America—one primary criticism is that this isn’t a race issue. Some people believe that Michael Brown wasn’t killed by officer Darren Wilson because he was black and that the militarized police actions toward the predominant African American community didn’t happen because the police force is almost all white.

Bill O’Reilly and White Privilege. Is white privilege real? Not according to Fox News’s Bill O’Reilly. This week O’Reilly debated the issue of white privilege with a fellow host and then returned to the topic the next day with this doozy of a statement: “Last night on ‘The Factor,’ Megyn Kelly and I debated the concept of white privilege whereby some believe that if you are Caucasian you have inherent advantages in America. ‘Talking Points’ does not, does not believe in white privilege. However, there is no question that African-Americans have a much harder time succeeding in our society than whites do.” A Ferguson, un nouveau type d’émeutes raciales se dessine. Michael Brown's Mom Laid Flowers Where He Was Shot—and Police Crushed Them.

St. Louis County police officers confront a crowd in Ferguson after Brown's shooting. David Carson/St. Louis Post-Dispatch/MCT/ZUMA Press. 10 Hours in Ferguson: A Visual Timeline of Michael Brown's Death and Its Aftermath. Below is a visual timeline detailing the events of August 9, from the time a Ferguson police officer shot and killed 18-year-old Michael Brown until about 10 p.m. that night, when a group of police vehicles departed from the neighborhood. Details are drawn from this New York Times report, Mother Jones interviews with a police spokesman and other sources, and content shared via Twitter by locals on the scene that day.

The latter included Thee Pharoah, a local rapper who witnessed the shooting; KMOV, a local TV news station; and Antonio French, a St. Louis alderman. (Note: Time stamps in the tweets below reflect the reader's time zone and may appear inaccurate; our bolded annotations accurately show events on Central Time.) Saturday, August 9, 12:01 p.m.: Michael Brown and a friend, Dorian Johnson, are walking in the street on Canfield Drive when they are confronted by Ferguson Police Officer Darren Wilson. Racisme et privilèges - Jour 2 - #Blogelul - Agir. #Ferguson : My Thoughts on an American Flashpoint. “…It was the corroboration of their worth and their power that they wanted, and not the corpse, still less the staining blood.” James Baldwin, “To Be Baptized,” from No Name in the Street, 1972 I have been asked by many people to take a close look at the Michael Brown shooting case in Ferguson, Missouri and offer my opinion.

Hundreds in Washington Protest Missouri Shooting. Photo WASHINGTON — Hundreds of protesters marched through busy, commercial streets here on a damp Saturday evening — with arms raised — protesting the killing of Michael Brown, the unarmed African-American teenager who was fatally shot by a police officer in Ferguson, Mo., earlier this month. Motorists leaned out of car windows, and restaurant patrons, waiters and tourists stepped onto the street to take pictures and videos of the throng.

Protest organizers — including the activist groups National Black United Front and the Answer Coalition — targeted the Chinatown neighborhood, said Eugene Young, a spokesman for the Answer Coalition, because, “If there’s not going to be justice for Michael Brown, then there won’t be any economic peace.” The demonstrators also demanded the arrest of Darren Wilson, the police officer who shot Mr. Brown, the demilitarization of police departments and the addition of cameras to police officers’ uniforms.

Public opinions on Brown killing show division by race. The Avant-Guard of White Supremacy, the White Supremacist State. Itemizing Atrocity. A Former Marine Explains All the Weapons of War Being Used by Police in Ferguson. Actor Orlando Jones Creates a ‘'Bullet Bucket Challenge’ #Ferguson: la couverture médiatique fait débat aux Etats-Unis. Ferguson, produit d'une longue histoire de brutalités policières. ACLU: First Amendment 'suspended in Ferguson' Police in Ferguson, Mo., on Monday began telling protesters – who have been gathered for days demanding justice for the death of an unarmed teenager at the hands of police – that they were no longer allowed to stand in place for more than five seconds, but had to keep moving.

“When inquiries were made to law enforcement officers regarding which law prohibits gathering or standing for more than five seconds on public sidewalks,” the ACLU of Missouri wrote in its emergency federal court filing to block the apparent policy, “the officers indicated that they did not know and that it did not matter. Ferguson is Everytown, U.S.A. The tragic killing of college-bound teenager Michael Brown has raised questions about the frequency with which police kill unarmed black men in America. City:ferguson. #ferguson. Why the media is siding with the Ferguson protesters: Reporters and demonstrators are looking for the truth. Ferguson, Missouri. In Defense of the Ferguson Riots.