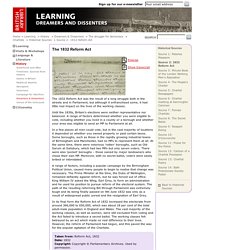 Until the 1830s, Britain's elections were neither representative nor balanced. A range of factors determined whether you were eligible to vote, including whether you lived in a county or a borough and whether your area was eligible to send an MP to Parliament at all. In a few places all men could vote, but in the vast majority of locations it depended on whether you owned property or paid certain taxes. Some boroughs, such as those in the rapidly growing industrial towns of Birmingham and Manchester, had no MPs to represent them at all. At the same time, there were notorious 'rotten' boroughs, such as Old Sarum at Salisbury, which had two MPs but only seven voters. The Great Reform Act. The first steps toward democracy At the start of the nineteenth century, Britain's parliamentary system was far from democratic. 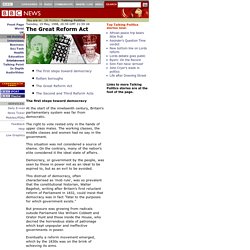 The right to vote rested only in the hands of upper class males. The working classes, the middle classes and women had no say in the government. This situation was not considered a source of shame. On the contrary, many of the nation's elite considered it the ideal state of affairs. Democracy, or government by the people, was seen by those in power not as an ideal to be aspired to, but as an evil to be avoided. This distrust of democracy, often characterised as 'mob rule', was so prevalent that the constitutional historian, Walter Bagehot, writing after Britain's first reluctant reform of Parliament in 1832, could insist that democracy was in fact "fatal to the purposes for which government exists.

" Sir Robert Peel during the second reading. A miracle? Charles Greville notes in his journal about the mood of the nation. A letter about the mood in the Commons. Princess Lieven writes a letter in reaction to the climate of reform. How Did the Tories Recover after the 1832 Reform Act? I am happy that you are using this web site and hope that you found it useful. 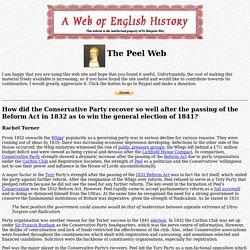 Unfortunately, the cost of making this material freely available is increasing, so if you have found the site useful and would like to contribute towards its continuation, I would greatly appreciate it. Click the button to go to Paypal and make a donation. Rachel Turner From 1832 onwards the Whigs' popularity as a governing party was in serious decline for various reasons.

1979 Historian. Vernon- modern Historian. What if ... the 1832 Great Reform Act hadn't happened? This was my contribution to the collection of historical counter-factuals, President Gore…: and Other Things That Never Happened. 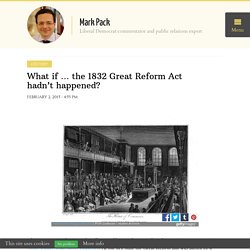 At one key stage the Great Reform Bill was passed by a majority of just one. What would have happened if the Bill had instead been defeated at that stage? The general election of July and August 1830 took place in an atmosphere of intense political crisis. The 1829 harvest had been very poor and food prices rose sharply. Widespread agricultural riots and organised protests spread, triggered not only by the state of the economy but also by the make-up of the political system. The election itself saw clear gains for those campaigning for reform, but failed immediately to remove the Conservative government led by the Duke of Wellington, victor of Waterloo. A largely Whig government took its place, under the leadership of probably the country’s most reluctant Prime Minister, Lord Grey. Perilous Question, by Antonia Fraser— review » The Spectator.

There are times when a major drama in the House of Commons really does change the course of British history. 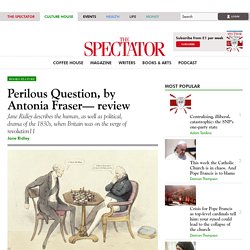 The period 1974–79, dramatised in the play This House, was one such. The crisis over the Great Reform Bill was another. Not so long ago, every schoolboy knew that the 1832 Reform Act gave the vote to the middle classes. Nowadays, thanks to the collapse of history teaching, very few schoolboys or girls know anything about it at all. Letters: The 1832 act was hardly great and didn't reform very much.

Nick Clegg says: "I'm talking about the most significant programme of empowerment by a British government since the great enfranchisement of the 19th century. 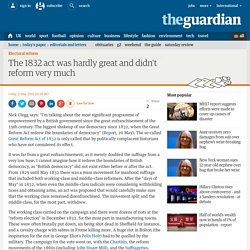 The biggest shakeup of our democracy since 1832, when the Great Reform Act redrew the boundaries of democracy" (Report, 20 May). The so-called Great Reform Act of 1832 is only called that by politically complacent historians who have not considered its effect. It was far from a great enfranchisement, as it merely doubled the suffrage from a very low base. I cannot imagine how it redrew the boundaries of British democracy, as "British democracy" did not exist either before or after the act. From 1829 until May 1832 there was a mass movement for manhood suffrage that included both working-class and middle-class reformers.