There's a Lot of IT in Brazil: Brasscom And The South American I. Posted by Tom Foremski - June 7, 2010 I'm spending this week in Brazil at a conference organized by the world's largest IT analyst firm Gartner, and sponsored by Brasscom, (Brazilian Association of Information Technology and Communication Companies) South American IT companies have started cropping up on my radar screen over the past year so I'm keen to find out more about this sector. 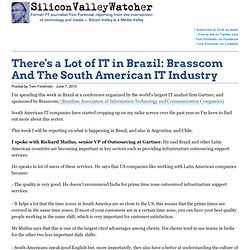 This week I will be reporting on what is happening in Brazil, and also in Argentina, and Chile. I spoke with Richard Matlus, senior VP of Outsourcing at Gartner. He said Brazil and other Latin American countries are becoming important in key sectors such as providing infrastructure outsourcing support services. He speaks to lot of users of these services. . - The quality is very good. . - It helps a lot that the time zones in South America are so close to the US, this means that the prime times are covered in the same time zones. Mr Matlus says that this is one of the largest cited advantages among clients. Interview: Berthier Ribeiro-Neto Head of Engineering at Google B. Posted by Tom Foremski - June 8, 2010 (I'm in Brazil all week reporting on the IT industries of South America.) 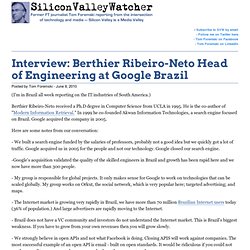 Berthier Ribeiro-Neto received a Ph.D degree in Computer Science from UCLA in 1995. He is the co-author of "Modern Information Retrieval. " In 1999 he co-founded Akwan Information Technologies, a search engine focused on Brazil. Google acquired the company in 2005. Here are some notes from our conversation: - We built a search engine funded by the salaries of professors, probably not a good idea but we quickly got a lot of traffic. -Google's acquisition validated the quality of the skilled engineers in Brazil and growth has been rapid here and we now have more than 300 people. - My group is responsible for global projects. 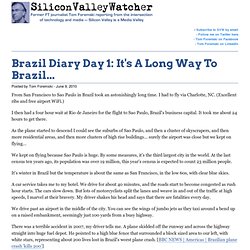 I had to fly via Charlotte, NC. (Excellent ribs and free airport WiFi.) I then had a four hour wait at Rio de Janeiro for the flight to Sao Paulo, Brazil's business capital. It took me about 24 hours to get there. As the plane started to descend I could see the suburbs of Sao Paulo, and then a cluster of skyscrapers, and then more residential areas, and then more clusters of high rise buildings... surely the airport was close but we kept on flying...

We kept on flying because Sao Paulo is huge. It's winter in Brazil but the temperature is about the same as San Francisco, in the low 60s, with clear blue skies. A car service takes me to my hotel. We drive past an airport in the middle of the city. There was a terrible accident in 2007, my driver tells me. (Photo by Gustible.)I check into the Sheraton World Trade Center, a large hotel and convention center with about 3,000 rooms. Silicon Valley Watcher - at the intersection of technology and m. Brasscom Global IT Forum at Ipanema.

Related:  Silicon Valley Watcher - at the intersection of technology and m   -  Education   -  Enterprise