Battle Spot Doubles replay: avalonez vs. revan301. These Evil, Yet Genius, Lifehacks Will Change Your Life. #5 Is Totally Wrong! 6 Real Life Glitches In The Matrix. Reddit User Dashynasty When I was in first grade or so, I had this crazy dream that my best friend was actually there with me having a sleepover. 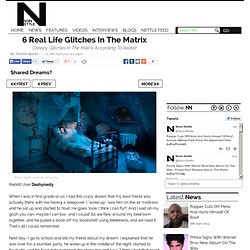 I "woke up", saw him on the air mattress and he sat up and started to float. He goes "look, I think I can fly!! " And I said oh my gosh you can, maybe I can too- and I could! So we flew around my bedroom together, and he pulled a book off my bookshelf using telekinesis, and we read it. Next day- I go to school and tell my friend about my dream. We were pretty freaked out. Why Can't Storm Troopers Ever Hit Anything? The Answer Might Just Blow Your Mind... DARPA: Meta-materials developed to bend sound waves, deflect tsunamis and create invisible armies. Singapore: A new way of assembling things, called metamaterials, may in the not too distant future help to protect a building from earthquakes by bending seismic waves around it. 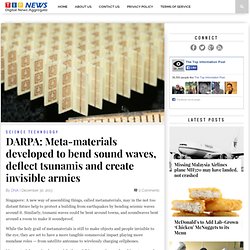 Similarly, tsunami waves could be bent around towns, and soundwaves bent around a room to make it soundproof. While the holy grail of metamaterials is still to make objects and people invisible to the eye, they are set to have a more tangible commercial impact playing more mundane roles — from satellite antennas to wirelessly charging cellphones. Metamaterials are simply materials that exhibit properties not found in nature, such as the way they absorb or reflect light. The key is in how they’re made.

By assembling the material — from photonic crystals to wire and foam — at a scale smaller than the length of the wave you’re seeking to manipulate, the wave can, in theory, be bent to will. “But we’re equally interested in seeing this transition in making a difference in people’s lives.” Source: Best Cases for the Samsung Galaxy Tab 2 (7 inch) 10 Free Android Apps to Boost Your Productivity. If you value efficiency and effectiveness, then your Android device should be your best friend. 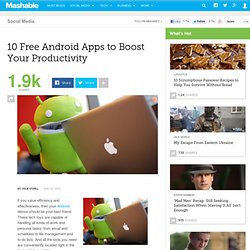 These tech toys are capable of handling all kinds of work and personal tasks, from email and schedules to file management and to-do lists. And all the tools you need are conveniently located right in the Android Market. With so many choices, however, things can get a little complicated. Here are ten highly rated, absolutely free Android apps that will help you work smarter, get more accomplished, save time and stay organized. 1. Downloads: 50,000-250,000Rating: 4 stars Dropbox is great because it's not just a mobile app; it allows you to manage files in fully synced folders from desktop and mobile devices. User comments:"So helpful! "" 2. Downloads: 10,000-50,000Rating: 4 stars This simple application allows you to snap pictures of business cards and automatically import that information to your virtual Rolodex. User comments:"High accuracy, impressive!

"" 3. 4. User comments:"Superb interface. "" 5. Electron Power Systems Electron Spiral Toroid For Energy And Propulsion. Use this search feature to quickly find the information you're looking for. Electron Power Systems™ founded by the discoverer and owner of its patents, Clint Seward is a variation on the spheromak idea arising from the observation of ball lightning. The proposed fuel is hydrogen and boron to produce aneutronic fusion. As envisioned by Clint Seward it should be able to be incorporated into small units that could power spacecraft and even cars. The propulsion units are therefore anticipated as being quite small - at least small enough to fit in cars. There is history of prior technology based on a similar idea. A Predecessor In the 1970s Dr Daniel Wells, who had been working on the stellarator at Princeton Plasma Physics Laboratories in the 1960s, began work on the TRISOPS project.

It used a theta pinch (θ-pinch), different from the z-pinch in the way the magnetic fields are oriented to the plasma. The Ball Lightning Model The Power Systems Model Proposed Progression. Burnbit - BitTorrent for every file. PirateBox DIY - David Darts Wiki. This isn't happiness™ Peteski.