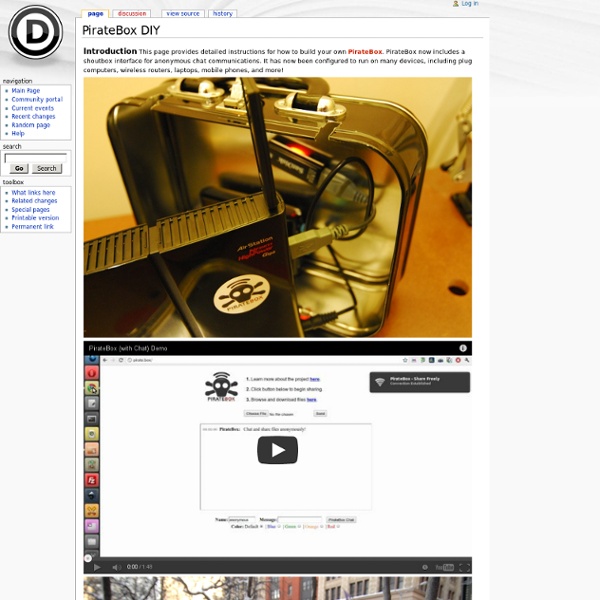 PirateBox DIY OpenWrt - David Darts Wiki Update May 30, 2014! PirateBox 1.0 has been released and building or upgrading a PirateBox has never been easier! Please refer to this tutorial for instructions and more info. For support, be sure to visit the new PirateBox Forum. myvu Crystal 701 iPod Edition For makers of wearable video displays—essentially, nose-mounted miniature video monitors with supporting frames, capable of letting you watch an iPod’s video without squinting at a tiny Apple screen—it has long been believed that mainstream popularity will come at a point when pricing and aesthetics become comparable to a good pair of sunglasses, rather than an expensive pair of goggles. Major strides have been made over the last several years, as companies such as Myvu and Vuzix developed lightweight dual-screen displays that looked like little more than an anonymizing black plastic bar in front of your eyes and ears, selling in the $200 to $300 range. While not attractive in the strictest sense of the word, the displays have become increasingly neutral, and by the end of last year rested on the fine edge of public tolerance. This year, for better or worse, manufacturers decided to design their way out of visual neutrality.

47 Sites Every Recording Musician Should Visit In a recent “Open Mic” we asked you, “Which music-related sites do you visit regularly?” This article is a summary of the great suggestions given in the comments to that article. You can make the list even longer by commenting on this article. As you’re reading this article, Audiotuts+ needs no introduction. 5 Fun things To Do on School Computers - Pahgawks Animations - StumbleUpon November 26th, 2010 I know it's been a while, but I'm reinstating my weekly blog post policy. This week will be about something I've wanted to write about for a while: School computers! They're just too easy to hack and do fun stuff with, especially because teachers are just so incompetent with technology sometimes. Anyway, tome for the top five! 1.

DIY Solar Still How To Make Your Own Distilled Water Make your own distilled water from stream or lake water, salt water, or even brackish, dirty water, using these DIY Solar Still Plans. With just a few basic building materials, a sheet of glass and some sunshine, you can purify your own water at no cost and with minimal effort. Distilled water is not just for drinking, and it’s always worth keeping a few gallons of it on hand. How to brick your DockStar and void the warranty Work done ;) I've just browsed a hour through the web looking for other sites about the DockStar and it seems my initial work (and the now nice price) has borne fruit. ;) You can now find many sites which are offering mostly easier and faster ways to brick your device than my description below. If you want to learn something or if you prefer Gentoo, my description still might be the one to follow, but if you just want to put a GNU/Linux system onto your device, most of the other descriptions are much better and faster. They are more actual, often offer binaries, automatic scripts and other nice things which you won't find here.

DIY Wearable Computer Turns You Into a Cyborg Someday humans and computers will meld to create cyborgs. But instead of waiting for it, Martin Magnusson, a Swedish researcher and entrepreneur, has taken the first step and created a wearable computer that can be slung across the body. Magnusson has hacked a pair of head-mounted display glasses and combined it with a homebrewed machine based on an open source Beagleboard single computer. Packed into a CD case and slung across the shoulder messenger-bag style, he is ready to roll. A computer is a window to the virtual world, says Magnusson.