Nash equilibrium. In game theory, the Nash equilibrium is a solution concept of a non-cooperative game involving two or more players, in which each player is assumed to know the equilibrium strategies of the other players, and no player has anything to gain by changing only their own strategy.[1] If each player has chosen a strategy and no player can benefit by changing strategies while the other players keep theirs unchanged, then the current set of strategy choices and the corresponding payoffs constitutes a Nash equilibrium. 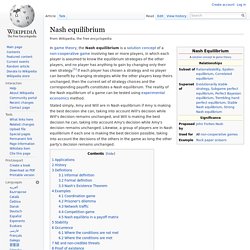 The reality of the Nash equilibrium of a game can be tested using experimental economics method. Stated simply, Amy and Will are in Nash equilibrium if Amy is making the best decision she can, taking into account Will's decision while Will's decision remains unchanged, and Will is making the best decision he can, taking into account Amy's decision while Amy's decision remains unchanged. Applications[edit] History[edit] The Nash equilibrium was named after John Forbes Nash, Jr. Let . Keynesian beauty contest. A Keynesian Beauty contest in the classroom. A Keynesian Beauty Contest in the Classroom Rosemarie Nagel Universitat Pompeu Fabra, Barcelona Most models of economic behavior are based on the assumption of rationality of economic agents and common knowledge of rationality. 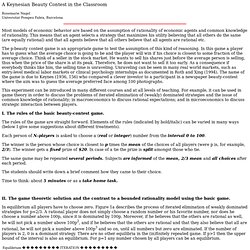 This means that an agent selects a strategy that maximizes his utility believing that all others do the same (are equally rational) and that all agents believe that all others believe that all agents are rational etc. The p-beauty contest game is an appropriate game to test the assumption of this kind of reasoning. In this game a player has to guess what the average choice is going to be and the player will win if his choice is closest to some fraction of the average choice. This experiment can be introduced in many different courses and at all levels of teaching.

I. The rules of the game are straight forward. Each person of N-players is asked to choose a (real or integer) number from the interval 0 to 100. The same game may be repeated several periods. II. III. V. Strategizing in the Brain. Ranking Cute Animals: A Stock Market Experiment : Planet Money. On the surface, Planet Money's first-ever economics experiment was all about cute animals. 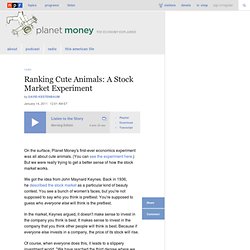 (You can see the experiment here.) But we were really trying to get a better sense of how the stock market works. We got the idea from John Maynard Keynes. Back in 1936, he described the stock market as a particular kind of beauty contest. You see a bunch of women's faces, but you're not supposed to say who you think is prettiest. In the market, Keynes argued, it doesn't make sense to invest in the company you think is best. Of course, when everyone does this, it leads to a slippery investment world. Pietra Rivoli, a professor at Georgetown's business school, explains the problem with a market like this: "The key danger is that nobody's really thinking. " With her guidance, we tested Keynes's idea. Half the people in the experiment were asked to pick the animal they genuinely thought was the cutest. 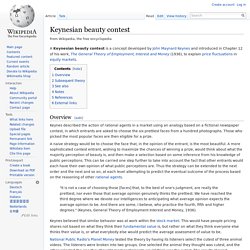 Overview[edit] Keynes described the action of rational agents in a market using an analogy based on a fictional newspaper contest, in which entrants are asked to choose the six prettiest faces from a hundred photographs. Those who picked the most popular faces are then eligible for a prize. A naive strategy would be to choose the face that, in the opinion of the entrant, is the most beautiful. A more sophisticated contest entrant, wishing to maximize the chances of winning a prize, would think about what the majority perception of beauty is, and then make a selection based on some inference from his knowledge of public perceptions. National Public Radio's Planet Money tested the theory by having its listeners select the cutest of three animal videos. See also[edit] Economics Letters : Are four heads better than two? An experimental beauty-contest game with teams of different size.