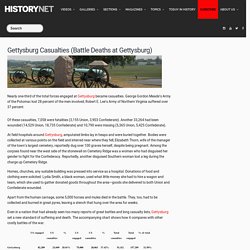 George Gordon Meade’s Army of the Potomac lost 28 percent of the men involved; Robert E. Lee’s Army of Northern Virginia suffered over 37 percent. Of these casualties, 7,058 were fatalities (3,155 Union, 3,903 Confederate). Another 33,264 had been wounded (14,529 Union, 18,735 Confederate) and 10,790 were missing (5,365 Union, 5,425 Confederate). At field hospitals around Gettysburg, amputated limbs lay in heaps and were buried together. Homes, churches, any suitable building was pressed into service as a hospital. Apart from the human carnage, some 5,000 horses and mules died in the battle. Even in a nation that had already seen too many reports of great battles and long casualty lists, Gettysburg set a new standard of suffering and death. 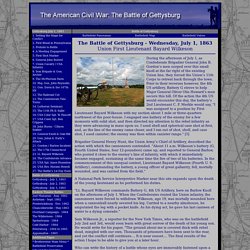 Gordon's men surged over this small knoll at the far right of the existing Union line, they forced the Union's 11th Corps to retreat back through the town. Prior to their reverses however, the 4th US artillery, Battery G strove to help Major General Oliver Otis Howard's men secure this hill. Of the action the 4th US would encounter this day, the battery's 2nd Lieutenant C. F. 10 Facts: Gettysburg. Battle Of Gettysburg. Facts, Summary and History Net Articles about the Battle Of Gettysburg during the American Civil War Gettysburg Facts Location Gettysburg, Pennsylvania, in Adams County Generals Union General: George G. 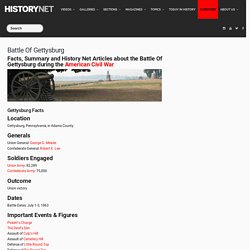 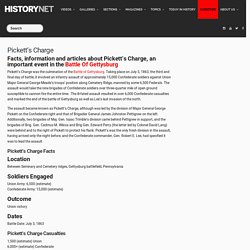 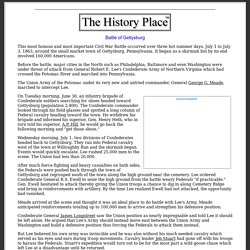 It began as a skirmish but by its end involved 160,000 Americans. Before the battle, major cities in the North such as Philadelphia, Baltimore and even Washington were under threat of attack from General Robert E. Lee's Confederate Army of Northern Virginia which had crossed the Potomac River and marched into Pennsylvania. The Union Army of the Potomac under its very new and untried commander, General George G. Meade, marched to intercept Lee. 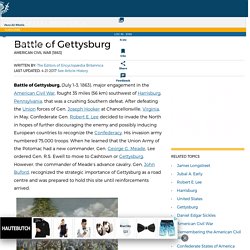 After defeating the Union forces of Gen. Joseph Hooker at Chancellorsville, Virginia, in May, Confederate Gen. Robert E. Lee decided to invade the North in hopes of further discouraging the enemy and possibly inducing European countries to recognize the Confederacy. His invasion army numbered 75,000 troops. Gettysburg Battle American Civil War July 1863. As the day before, the morning of the 3rd passed quietly, with both armies positioned on ridges about a mile apart. 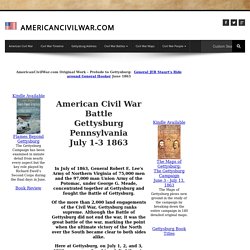 The silence was broken around 1:00 p.m., when the rebel artillery, a hundred guns massed hub to hub, exploded with a thunderous cannonade that lasted until 2 o'clock. The cannonade threw most of its shells over the Union line, the shells falling among the parks of Union trains in rear of Cemetery Ridge. When the cannonade was over, a mass of 15,000 shaggy men in brown homespun moved out from the rebel position and began walking toward Cemetery Ridge, across the Emittsburg Road, past the carnage of the day before, and up the slight incline that leads to the Clump of Trees.

As they walked, great gaps were torn in their line by Union artillery, quickly closed by men from a second line stepping up. Civil War Trust. Battle of Gettysburg - American Civil War. My TV provider is not listed. 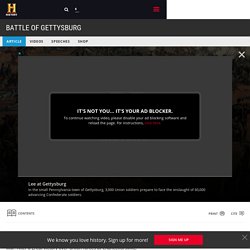 There will be new episodes and web exclusives added every day. How quickly does a new episode get added after it airs on TV?