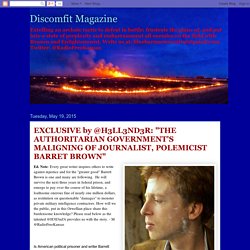 Note: Every great writer inspires others to write against injustice and for the "greater good" Barrett Brown is one and many are following. He will survive the next three years in federal prison, and emerge to pay over the course of his lifetime, a loathsome onerous fine of nearly one million dollars, as restitution on questionable "damages" to monster private military intelligence contractors.

How will we the public, put in this Orwellian place share this burdensome knowledge? Please read below as the talented @H3ll3nd3r provides us with the story. - M @RadioFreeKansas. Search Results. Free Barrett Brown — Barrett Brown's allocution / sentencing statement. Good afternoon, Your Honor. 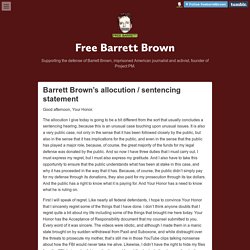 And so now I have three duties that I must carry out. I must express my regret, but I must also express my gratitude. And I also have to take this opportunity to ensure that the public understands what has been at stake in this case, and why it has proceeded in the way that it has. First I will speak of regret. I’m going to say a few more words about my regrets in a moment, but now I’m going to get to the unusual part of the allocution. Thank you. 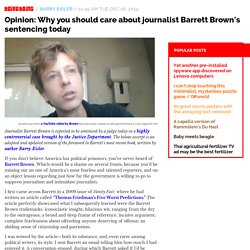 The below excerpt is an adapted and updated version of the foreword to Barrett's most recent book, written by author Barry Eisler. If you don’t believe America has political prisoners, you’ve never heard of Barrett Brown. ​Govt moves to keep Barrett Brown case secret as sentencing looms — RT USA. Published time: December 13, 2014 00:09 Screenshot from youtube.com @BarrettBrown On the eve of a court hearing more than two years in the making, federal attorneys are asking a Texas judge to keep details about their case against journalist Barrett Brown secret as they seek an eight-and-a-half year sentence. 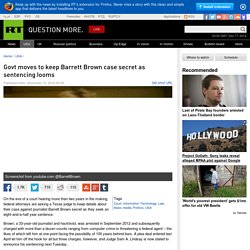 Brown, a 33-year-old journalist and hacktivist, was arrested in September 2012 and subsequently charged with more than a dozen counts ranging from computer crime to threatening a federal agent – the likes of which left him at one point facing the possibility of 100 years behind bars. A plea deal entered last April let him off the hook for all but three charges, however, and Judge Sam A. Lindsay is now slated to announce his sentencing next Tuesday. Backing Barrett Brown: Amherst activist behind defense fund for journalist who faced 100 years in prison. NORTHAMPTON – Hacking and data leaks produced some of the biggest U.S. news stories of the past few years, such as stories surrounding WikiLeaks, Edward Snowden and Bradley Manning. 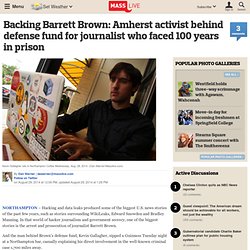 In that world of hacker journalism and government secrecy, one of the biggest stories is the arrest and prosecution of journalist Barrett Brown. And the man behind Brown’s defense fund, Kevin Gallagher, sipped a Guinness Tuesday night at a Northampton bar, casually explaining his direct involvement in the well-known criminal case 1,700 miles away. Gallagher, a 28-year-old computer systems administrator from eastern Massachusetts, is the organizer behind Brown’s legal defense fund.

Gallagher isn’t a lawyer or a typical nonprofit organizer. He wasn’t exactly a hacker-activist before a few years ago. Barrett Brown. 10 comments I’m afraid I’m now being kept in the Seagoville federal prison Special Housing Unit, or SHU, known more informally as “segregation” and even more informally as “the hole.” 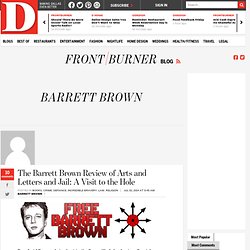 Several of my fellow jail unit inmates and I were brought here in the wake of a June 17 incident that the Department of Justice is billing as a “semi-disturbance” for which we are to be investigated and perhaps punished — though not necessarily in that order. One awaits one’s disciplinary hearing in the hole, and if one if found guilty, one is sentenced to … the hole. More than a week after being confined, I’ve yet to even be charged with an infraction. Full Story. Silencing Barrett Brown. By Douglas Lucas on Apr 28, 2014 The previously unreleased transcript of Barrett Brown’s September 4 gag hearing in Dallas, obtained by WhoWhatWhy, shows just how far the government tried to go to shut up a “hacktivist journo” who challenged the status quo. 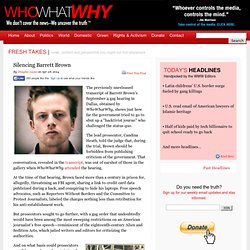 The lead prosecutor, Candina Heath, told the judge that, during the trial, Brown should be forbidden from publishing criticism of the government. That conversation, revealed in the transcript, was out of earshot of those in the gallery when WhoWhatWhy attended the hearing. 09-04-2013(USA v. Brown)Motion - BrownGagHearingTranscript.pdf. Interview with Kevin Gallagher of freebarrettbrown.org - Freeanons.

US stops jailed activist Barrett Brown from discussing leaks prosecution. A federal court in Dallas, Texas has imposed a gag order on the jailed activist-journalist Barrett Brown and his legal team that prevents them from talking to the media about his prosecution in which he faces up to 100 years in prison for alleged offences relating to his work exposing online surveillance. 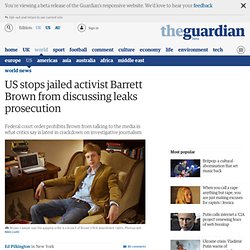 The court order, imposed by the district court for the northern district of Texas at the request of the US government, prohibits the defendant and his defence team, as well as prosecutors, from making "any statement to members of any television, radio, newspaper, magazine, internet (including, but not limited to, bloggers), or other media organization about this case, other than matters of public interest. " It goes on to warn Brown and his lawyers that "no person covered by this order shall circumvent its effect by actions that indirectly, but deliberately, bring about a violation of this order". Feds Seize Barrett Brown’s Legal Defense Fund. #AntiSec releases creditcard details of 13 #FBI agents in retaliation for the arrest of @BarrettBrownLOL. We didn't plan this #FFF. 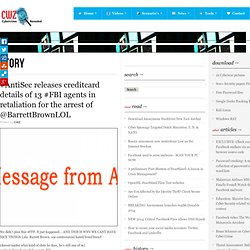 It just happened....AND THIS IS WHY WE CANT HAVE NICE THINGS.Lulz. Barrett Brown, our controversial hated/loved friend (doesnt matter what kind of shits he does, he's still one of us) seems to have been v&'d...again. XD (you can look forward and find that splendid video of him being raided at mashable or youtube.) hhahahaha. then try to come and convince us that FBI is not mad as hell at us. remember there's always another behind behind the behind. if u dont want to trust us, it's ok, you shouldn't. but dont be dumb and at least to not realise something here is kinda fishy currently. So here we go: (switching to presumedly fake serious voice) hi guise. Awesome. so that was all. cool, isnt it? Why didnt u say that since beginning? Disclaimer: we know sarcasm probably will never work on the irc or internet in general. so Today's menu: List of credentials. Anonymous hacktivist’s mom faces $100k fine for hiding computer. 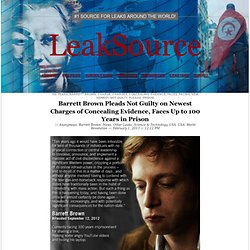 The judge will issue an order to that effect later today or early tomorrow. At the same time, Brown was arraigned and pleaded not guilty to his newest charge, concealing evidence, for which he was indicted last week. Those charges were added onto two other indictments, for allegedly threatening an FBI agent in a YouTube video and for disseminating information from the Christmas Day hack of intelligence firm Stratfor. DOJ Issues Subpoena for Info on Barrett Brown’s Project PM Site. The US government continues to go after computer activists who seek to reveal the truth about the shadowy cybersecurity industry. The latest target is web-hosting company Cloudflare.

The US government has dramatically lifted the stakes in its crackdown on journalism, subpoenaing a US company in an effort to obtain information about the research and writing of articles that exposed its links with the cybersecurity industry. In a remarkable fishing expedition, the US Department of Justice has used its prosecution of author and activist Barrett Brown to issue a subpoena to web-hosting company Cloudflare for information relating to the Echelon wiki site.

That site was used by Project PM, an international collaborative research project dedicated to piecing together a clearer picture of the US cybersecurity industry, its extensive links with the US government and secret activities such as the HBGaryFederal-Palantir-Berico plot to destroy WikiLeaks. Jailed Journalist Barrett Brown Faces 105 Years For Reporting on Hacked Private Intelligence Firms.

Barrett Brown and the U.S. government's war against sharing links. Can a person be sent to jail for sharing a link? That is the question before the U.S. Why Is Barrett Brown Facing 100 Years in Prison? It was announced on Wednesday morning that Barrett Brown, a man who became a very public talking head for AnonOps (the brain trust that is arguably the cortex of the hacktivist group Anonymous, even though there technically isn’t one) is facing up to 100 years in jail for three separate indictments. Two of the indictments—the threatening of an FBI officer in a YouTube video and the concealing of evidence—do not seem worthy of such a harsh sentence, considering a man in Houston recieved only 42 months for threatening to blow up an FBI building, and a former dentist got 18 months for threatening to kill an FBI agent.

The third, however, pertains to Barrett Brown's pasting of a link in an Anonymous IRC chat room to a document full of credit card numbers and their authentication codes that was stolen from the security company Stratfor, in the midst of a hack that released over five million internal emails. Brown-050.

Supporting the defense of Barrett Brown: imprisoned American journalist and activist, founder of Project PM. Free Barrett Brown. The Strange Case of Barrett Brown. Reading 'Born Again' in Jail. I’ve spent the last year or so in a federal lock-up awaiting trial on charges that have been duly analyzed elsewhere. Long story short: I’m facing decades in prison. This is inconvenient in some respects, but there are perks.

Had I not been imprisoned, I probably never would have gotten around to reading the book that’s been a beloved staple of the US Corrections System since it was first published in 1975: Born Again, by Nixon aide Chuck Colson, who famously found Jesus before his brief incarceration on Watergate-related offenses. Christianity is popular among inmates—almost as popular as crime—and Born Again has plenty of both. Barrett Brown is Anonymous. Comment The night before Michael Isikoff came to Dallas, I got an e-mail from Barrett Brown. “Apparently Isikoff is freaked out about having another journalist here,” it said. “But I’ll secretly record the proceedings and provide to you.”