Blm. Seasons greetings. Debunked. Eric Holder. Forensic Pathologist Cyril Wecht SHUTS DOWN All Nonsense in Michael Brown Case. Mask: Hey, Step Back with the Riot Shaming. As you may have heard, a young black man named Michael Brown from Ferguson, Missouri was shot many times and killed by a police officer on August 9 of this year. 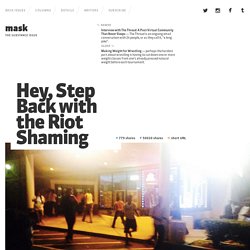 A bit of a caveat before my rant: I'm angry and it comes out a bit here. Sorry not sorry. Processing my anger in the wake of Michael Brown’s murder. On August 11, 1965, the Watts neighborhood of Los Angeles exploded after a confrontation with police grew to a critical mass. In Defense of Looting. For most of America’s history, one of the most righteous anti-white supremacist tactics available was looting. 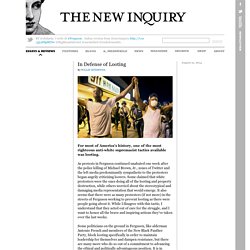 As protests in Ferguson continued unabated one week after the police killing of Michael Brown, Jr., zones of Twitter and the left media predominantly sympathetic to the protesters began angrily criticizing looters. Some claimed that white protesters were the ones doing all of the looting and property destruction, while others worried about the stereotypical and damaging media representation that would emerge. It also seems that there were as many protesters (if not more) in the streets of Ferguson working to prevent looting as there were people going about it. While I disagree with this tactic, I understand that they acted out of care for the struggle, and I want to honor all the brave and inspiring actions they’ve taken over the last weeks. Justice Scalia Explains What Was Wrong With The Ferguson Grand Jury. By Judd Legum. 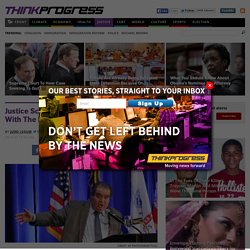 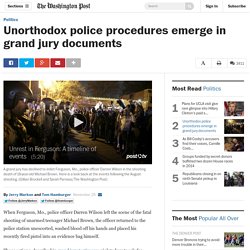 Those actions, described in grand jury testimony, violated protocols for handling a crime scene and securing evidence, according to experts in policing procedures and Justice Department documents. Officer Darren Wilson. White opinion bingo. 7 Documentaries You Can Stream Right Now To Better Understand What's Going On... We Are The Enemy: Is This The Lesson Of Ferguson? Ferguson matters because it provides us with a foretaste of what is to come. 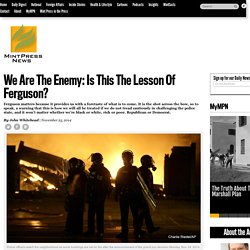 It is the shot across the bow, so to speak, a warning that this is how we will all be treated if we do not tread cautiously in challenging the police state, and it won’t matter whether we’re black or white, rich or poor, Republican or Democrat. Evidence in Darren Wilson’s Grand Jury Decision Revealed: Was the Deck Stacke... Ferguson, Mo. – St. 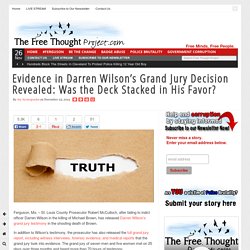 Louis County Prosecutor Robert McCulloch, after failing to indict officer Darren Wilson in the killing of Michael Brown, has released Darren Wilson’s grand jury testimony in the shooting death of Brown. In addition to Wilson’s testimony, the prosecutor has also released the full grand jury report, including witness interviews, forensic evidence, and medical reports that the grand jury took into evidence. The grand jury of seven men and five women met on 25 days over three months and heard more than 70 hours of testimony. Agent provocateur. National guard. Chris rock. 7th Ave NY. Outside the White House. Ferguson. Eyewitness speaks on the murder of Mike Brown. The Real Outside Agitators (2:42) by Mumia Abu-Jamal.

The Real ‘Outside Agitators’ [col. writ. 8/19/14] © ’14 Mumia Abu-Jamal As the days and nights of angry resistance rage on in Ferguson, Missouri, the corporate media embarks on its newest campaign: the proposed banning of “outside agitators”. 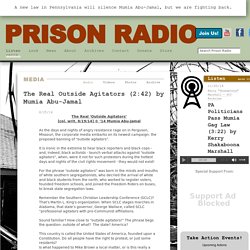 It is ironic in the extreme to hear black reporters and black cops - and, indeed, black activists - launch verbal attacks against “outside agitators”, when, were it not for such protestors during the hottest days and nights of the civil rights movement - they would not exist! For the phrase “outside agitators” was born in the minds and mouths of white southern segregationists, who decried the arrival of white and black students from the north, who worked to register voters, founded freedom schools, and joined the Freedom Riders on buses, to break state segregation laws. Remember the Southern Christian Leadership Conference (SCLC)? Sound familiar? This country is called the United States of America, founded upon a Constitution. --©’14maj. Hiding. Ferguson cops b like. More patriotic. Darren Wilson belongs in prison. ME Report 2. ME Report 1. Riot. Jon Stewart Goes After Fox in Powerful Ferguson Monologue.

How Will the Right-Wing Hate Media Distort the New Evidence in the Michael Br... Mike Brown special. Ferguson Shooting Audio Recording Verified as Real. RT.com Image: The Free Thought Project: Cassandra Rules The 12-second audio clip first came to light on CNN earlier this week, and features a man chatting with a friend of his using a video-recording messenger system called Glide. 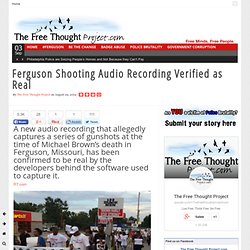 As the unnamed individual records his message, a string of gunfire can be heard in the background. Numerous gunshots can be heard before the action is broken up with a pause. Shortly afterwards, though, another barrage of shots occurs. At least 10 gunshots total can be heard during the recording, which Glide certified as being captured at 12:02 pm on Saturday, August 9th. “A Glide user living nearby (whose identity is being protected) was simply using the Glide app on their smartphone exactly as it was designed – to instantly communicate with a friend through our real-time video texting service,” the app stated on its blog.

The recording has also been handed over to the FBI, which is conducting its own analysis. Republished with permission from Russia Today. Ferguson-police-report.pdf. The Coming Race War Won’t Be About Race. The ACLU Response to Ferguson.