Bacterial explanation for Europa's rosy glow - 11 December 2001. The red tinge of Europa, one of Jupiter's moons, could be caused by frozen bits of bacteria. 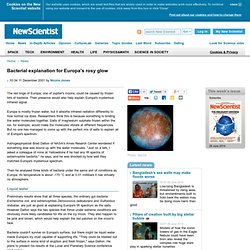 Their presence would also help explain Europa's mysterious infrared signal. Europa is mostly frozen water, but it absorbs infrared radiation differently to how normal ice does. Researchers think this is because something is binding the water molecules together. Salts of magnesium sulphate frozen within the ice, for example, would make the molecules vibrate at different frequencies. NASA's Juno Spacecraft is Halfway to Jupiter. A computer-generated image depicts NASA’s Juno spacecraft. 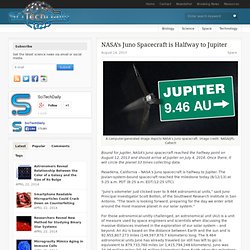 Image credit: NASA/JPL-Caltech Bound for Jupiter, NASA’s Juno spacecraft reached the halfway point on August 12, 2013 and should arrive at Jupiter on July 4, 2016. Once there, it will circle the planet 33 times collecting data. Pasadena, California – NASA’s Juno spacecraft is halfway to Jupiter. The Jovian-system-bound spacecraft reached the milestone today (8/12/13) at 5:25 a.m. “Juno’s odometer just clicked over to 9.464 astronomical units,” said Juno Principal Investigator Scott Bolton, of the Southwest Research Institute in San Antonio.

For those astronomical-unitly challenged, an astronomical unit (AU) is a unit of measure used by space engineers and scientists when discussing the massive distances involved in the exploration of our solar system – and beyond. Juno will arrive at Jupiter on July 4, 2016, at 7:29 p.m. Juno was launched on August 5, 2011. Juno’s name comes from Greek and Roman mythology. Jupiter in Motion. Distribution of Water in Jupiter's Stratosphere - Image of the Day - Images. NASA Joins Europe for Exploration of Jupiter's Icy Moons: Europa, Ganymede and Callisto. Jupiter’s diverse Galilean moons – volcanic Io, icy Europa and rock-ice Ganymede and Callisto – make the Jovian system a miniature Solar System in its own right. 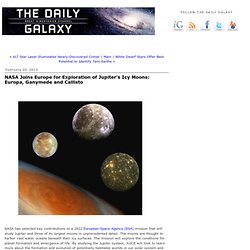 Ganymede is the only moon in the Solar System known to generate its own magnetic field. JUICE will observe the unique magnetic and plasma interactions with Jupiter’s magnetosphere in detail. “Jupiter is the archetype for the giant planets of the Solar System and for many giant planets being found around other stars,” says Prof. Alvaro Giménez Cañete, ESA’s Director of Science and Robotic Exploration. 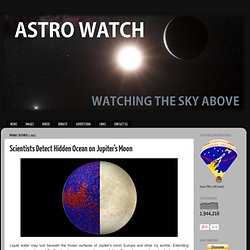 Extending ocean science beyond Earth, planetary oceanographers are linking Europa's ocean dynamics to its enigmatic surface geology. Although never directly observed, this hidden sea holds the key to Europa’s enigmatic surface geology, scientists believe. Any liquid water represents a potential habitat for life. A team of researchers at the University of Texas with assistance from a computer modeler at the Max Planck Institute in Germany has put together a computer model that might just explain the peculiar surface of Jupiter's moon Europa. In their paper published in the journal Nature Geoscience, the team suggests the odd surface terrain patterns likely come about due to convection. Europa, the sixth-closest moon of Jupiter, is covered with icy chunks that have been cracked and crunched into chaotic patterns.

Scientists aren’t exactly sure what processes form and shape the patterns. There has been an error. Read more: Click here to read a longer version of this story JUPITER'S icy moon Europa is pockmarked by curious domes and depressions. 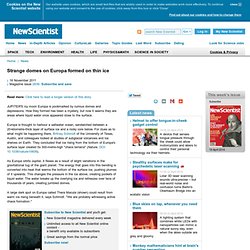 How they formed has been a mystery, but now it seems they are areas where liquid water once appeared close to the surface. Europa is thought to harbour a saltwater ocean, sandwiched between a 20-kilometre-thick layer of surface ice and a rocky core below. For clues as to what might be happening there, Britney Schmidt of the University of Texas, Austin, and colleagues looked at studies of subglacial volcanoes and ice shelves on Earth. Salty water oozes up from Jupiter moon's hidden ocean - space - 07 March 2013. If you could lick Jupiter's moon Europa, it would taste like earthly seawater. 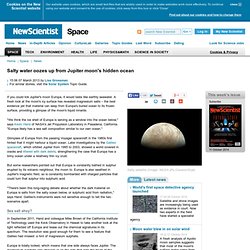 A fresh look at the moon's icy surface has revealed magnesium salts – the best evidence yet that material can seep from Europa's buried ocean to its frozen surface, providing a glimpse of the . "We think the ice shell of Europa is serving as a window into the ocean below," says Kevin Hand of NASA's Jet Propulsion Laboratory in Pasadena, California. "Europa likely has a sea salt composition similar to our own ocean. " Glimpses of Europa from the passing Voyager spacecraft in the 1980s first hinted that it might harbour a liquid ocean. Later investigations by the Galileo spacecraft, which orbited Jupiter from 1995 to 2003, showed a world covered in cracks and littered with dark debris, strengthening the case that Europa has a briny ocean under a relatively thin icy crust.

But some researchers pointed out that Europa is constantly bathed in sulphur erupted by its volcanic neighbour, the moon Io. Sea salt ahoy? Jupiter sounds (so strange!) NASA-Voyager recording. NASA Sound of Space - Jupiter's Moon Io. 8 amazing auroras: Jupiter. Astrophile: Tour the scenic lava lakes of Io - space - 28 June 2013. Astrophile is our weekly column on curious cosmic objects, from the solar system to the far reaches of the multiverse Object: A lava lake trioAmbience: Diverse, but generally sweltering Take a trip to Io, one of Jupiter's many moons, and you will find pools of boiling hot lava nestled among the erupting peaks of raging volcanoes. 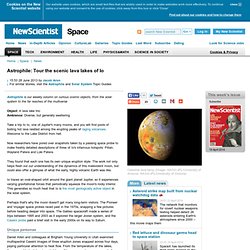 Welcome to the Lake District from hell. Now researchers have pored over snapshots taken by a passing space probe to make freshly detailed descriptions of three of Io's infamous hotspots: Pillan, Wayland Patera and Loki Patera. They found that each one has its own unique eruption style. Experience one (spectacular) day in orbit around Jupiter. Jupiter Explosion Spotted by Amateur Astronomers.

NASA 's Amy Simon Miller , though, cautioned that, "at this point, we can only confirm based on the fact that there were two independent reports. " Official observations will have to wait. Such a strike would be the fourth impact seen on Jupiter in just the last three years. And the fact that the explosion was visible via backyard telescopes more than 454 million miles (730 million kilometers) away—indicates it was probably a significant event.

"Although we don't yet know the size or exact nature of the impactor, based on the flash brightness we expect it is slightly bigger and energetic than the one seen in 2010 , which was estimated to be on the order of 10 meters [33 feet] in size," said Miller, chief of the planetary systems laboratory at Goddard Spaceflight Center in Maryland. "By contrast, the impactor in 2009 was likely 200 to 500 meters [660 to 1,600 feet]. "