Beautiful Portraits of Strangers. 35 Beautiful Examples Of Shadow Photography. One part of the stunning photography is taking the shadow of an object. 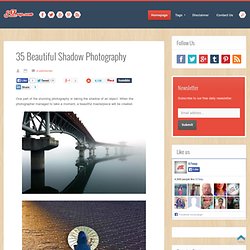 When the photographer managed to take a moment, a beautiful masterpiece will be created. Dust... (????...) by Vladimir Shipulin. 20 Stunning Pictures of Nature that will blow your mind. And this, our life, exempt from public haunt, finds tongues in trees, books in the running brooks, sermons in stones, and good in everything. - William Shakespeare All my life I have tried to pluck a thistle and plant a flower wherever the flower would grow in thought and mind. - Abraham Lincoln Keep your face to the sunshine and you cannot see a shadow. - Helen Keller Forget not that the earth delights to feel your bare feet and the winds long to play with your hair. - Khalil Gibran Come forth into the light of things, let nature be your teacher. - William Wordsworth. 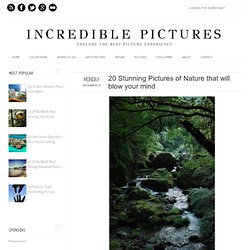 42 of the Most Powerful Pictures Ever Taken. #13 Totally Destroyed Me. 1. Grief Robert Peraza kneels down in grief before his son’s name on the 9/11 Memorial. 2. 10 Photos Of Mirrors That Look Like Painted Easels. - StumbleUpon. Homesickness by Marcin Kesek. Dance Photography By Matter Jordan. – March 10, 2011 Human Interest Photography 16 Dance Human Interest Photography By Matter Jordan Dancers Among Us is a collection of photographs featuring photographs of dancers from the NYC Dance which consists of members such as Paul Taylor, Mark Morris and Martha Graham Dance Company. 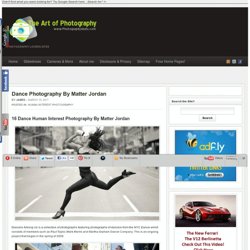 This is an ongoing project that began in the spring of 2009. No trampolines or other device used for this picture, just have thousands of flying hours. Some cool photos that will make you be glad and rejoice. Silent World by Michael Kenna. Andrew Moore. Created Equal: A Stunning Photo Series Exploring Cultural Difference in America. Detroit-born Photographer Mark Laita explores social and cultural clashes between different social backgrounds by juxtaposing people of United States in his stunning series “Created Equal”. 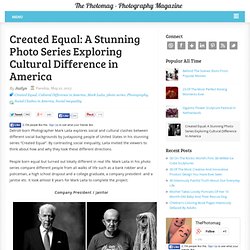 By contrasting social inequality, Laita invited the viewers to think about how and why they took these different directions. People born equal but turned out totally different in real life. Beautiful Monochromatic Portraits by Federico Erra. 25 Incredibly Detailed Black And White Portraits of the Homeless by Lee Jeffries. Lee Jeffries career began as a sports photographer, capturing the beautiful game of football in Manchester. 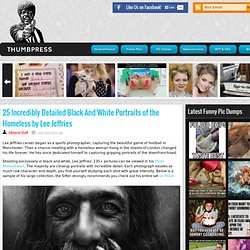 Then a chance meeting with a homeless woman living in the streets of London changed his life forever. He has since dedicated himself to capturing gripping portraits of the disenfranchised. Shooting exclusively in black and white, Lee Jeffries’ 135+ pictures can be viewed in his Flickr Photostream. The majority are closeup portraits with incredible detail.

Each photograph exudes so much raw character and depth, you find yourself studying each shot with great intensity. Lee Jeffries lives in Manchester in the United Kingdom. 32 Magnificent Black And White Celebrity Photographs. 1. 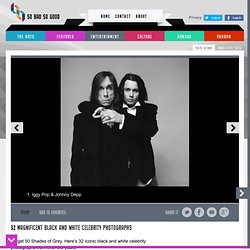 Iggy Pop & Johnny Depp 2. James Hetfield, Fred Durst, Marilyn Manson, Ozzy Osbourne 3. Willem Dafoe 4. 5. Time-Traveling photographer goes back to history's most iconic moments to add herself. By Daily Mail Reporter Published: 02:50 GMT, 21 April 2013 | Updated: 11:16 GMT, 21 April 2013 Many of us have dreamed of going back in time to see the Beatles or Marilyn Monroe, but one photographer has dialed back the clock (well, at least on celluloid). 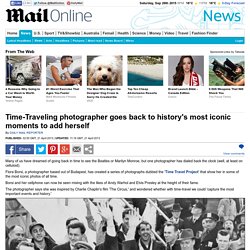 Flora Borsi, a photographer based out of Budapest, has created a series of photographs dubbed the 'Time Travel Project' that show her in some of the most iconic photos of all time. Borsi and her cellphone can now be seen mixing with the likes of Andy Warhol and Elvis Presley at the height of their fame. Awesome People Hanging Out Together. The title is pretty explanatory and it's coming from a very cool blog where they showcase shots of famous people hanging out together from the new and old times. 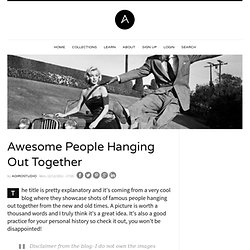 A picture is worth a thousand words and I truly think it's a great idea. It's also a good practice for your personal history so check it out, you won't be disappointed! Disclaimer from the blog: I do not own the images posted, I provide photo credit when I am aware of the source. You are free to message me to provide the credit or to ask for removal of an image. Thank You. For more information or submit your pictures to the blog 'Awesome People Hanging Out Together, you can visit the website at AwesomePeopleHangingOutTogether.tumblr.com. Thomas Barbèy's astounding surrealism. Today, everyone’s a photographer, grabbing their iPhones for a quick snap. 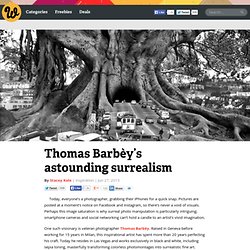 Pictures are posted at a moment’s notice on Facebook and Instagram, so there’s never a void of visuals. Perhaps this image saturation is why surreal photo manipulation is particularly intriguing; smartphone cameras and social networking can’t hold a candle to an artist’s vivid imagination. One such visionary is veteran photographer Thomas Barbèy. Raised in Geneva before working for 15 years in Milan, this inspirational artist has spent more than 20 years perfecting his craft. Today he resides in Las Vegas and works exclusively in black and white, including sepia toning, masterfully transforming colorless photomontages into surrealistic fine art. 25 Beautiful Black & White Photos. Black-and-white images are not usually starkly contrasted black and white. 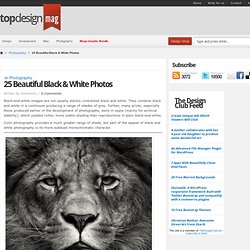 They combine black and white in a continuum producing a range of shades of gray. - StumbleUpon. A due colori. Italian artist Alberto Seveso was born in Milan, but is now working as a freelancer in Portoscuso, Sardinia-Italy. His passion for graphic art started when he was in a young age and he was really fascinated by the graphic of skate decks and the cover of music CD of metal bands. From this passion he started to create his artwork. In his series ‘A due colori’ Seveso experiments with high-speed photography while trying to find a new way to make something beautiful using ink and water. Loving to play with colors and tones, this series embodies the concept of stopping time through ink in the image. All images © Alberto Seveso | Via: mindsparklemag.

Neon Paint Brings Ordinary Portraits to Life. Light effects are just about as versatile as the imagination. The possibilities are endless. This is what Portuguese photographer Hid Saib discovered as he played around with some neon effects on people’s faces. Hid Saib used tiny flecks of vivid neon paint and decorated the faces as well as shoulders of the subjects in his portraits. The results are images that look like a starry night or celestial patterns all over the subject’s faces. Some even resemble an aurora borealis thanks to the colorful illumination of the neon paint that seem to be bursting.

One will observe that there is an irregularity to the intensity of each neon paint speck, all the more creating realism in every image. In other images, there is a more peaceful aura, with subjects appearing more serene with the strange glow. 40 Astounding Examples of Abstract Photography. I just love the creativity we see in abstract photography. I love it when a photographer takes an otherwise ordinary shot and shoots it at just the right angle or focus to create a masterpiece of colors, patterns and textures. With abstract photography there is only one rule and that rule is there are no rules. Rules for composition and proper focus don’t really apply.

Here are some great examples of abstract photography to inspire you to go out and create your next work of art. - StumbleUpon. Most popular photography on StumbleUpon! 2011 is over, In this article, I am showcasing the most beautiful photographs that were stumbled on StumbleUpon. Untitled Document. The world's highest chained carousel, located in Vienna, at a height of 117 meters. Curiosidades 34. Fotos del momento justo at Archivo Mayo 2008 a Febrero 2010 MinutoDigital.com.

The Top 50 ‘Pictures of the Day' for 2011. Every day at 5pm the Sifter posts the Picture of the Day. 45 Perfectly Timed Photographs That Will Leave You Stunned. Chance, position, timing, angles, lighting, and being in the right place at exactly the right moment make these photographs some of the most intriguing and mind-bending pictures of all-time. Explore the perfect timing of capturing lightning strikes on skyscrapers. Impossible time. by Thoum. - StumbleUpon. Pictures of Moments Speak More than Thousand Words......

Picture can speak thousands of words. 40 Of The Most Powerful Photographs Ever Taken. Sisters pose for the same photo three separate times, years apart. A Russian war veteran kneels beside the tank he spent the war in, now a monument. Faces of World Poverty: 20 Arresting Photographs. Where Children Sleep by James Mollison. 24 Touching photos that will grab you by the Heart..And Never let go. Tissues Require. These 20 Photographs Will Leave You Speechless. Especially The 6th One. There Are No Words. 10 photographs of children from around the world and their bedrooms. Simon Tong Photography.