FHDFPV by cooingdv - more detailed information than App Store & Google Play by AppGrooves - Entertainment - 9 Similar Apps & 1,386 Reviews. Do not buy this product it is a scam, the battery life is less than 5 minutes of flight time, It is a waste of a 100 dollars and only on the 2nd flight (after charging it multiple times) and having barely flown it. 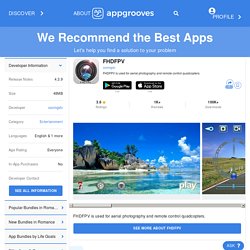 I pressed the return to home button and it flew at full speed the other direction and landed in a tree. Once I finally got it out of the tree, then it was time to charge it again. As soon as it finished charging I took it for it’s 3rd and last flight. Related Apps: KY FPV - by cooingdv - Entertainment Category - 10 Similar Apps & 799 Reviews - AppGrooves: Get More Out of Life with iPhone & Android Apps. How to re-purpose your old Android phone into a high-res dash cam. While there are often trade-in offers and venues where you can sell your old phone when you’re ready to upgrade, the notoriously rapid depreciation of smartphones might make it a better idea to simply keep your old handset. 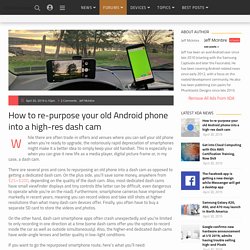 This is especially so when you can give it new life as a media player, digital picture frame or, in my case, a dash cam. There are several pros and cons to repurposing an old phone into a dash cam as opposed to getting a dedicated dash cam. On the plus side, you’ll save some money, anywhere from $25–$200, depending on the quality of the dash cam.

Also, most dedicated dash cams have small viewfinder displays and tiny controls (the latter can be difficult, even dangerous to operate while you’re on the road). Furthermore, smartphone cameras have improved markedly in recent years, meaning you can record videos and take still shots at higher resolutions than what many dash cam devices offer. If you want to go the repurposed smartphone route, here’s what you’ll need: Samsung (Cellphone, Repair, Teardown, Reverse Engineering, & dissasemb. Android – Planet Android – grootste Google Android blog in Neder. Best Android Apps. Best Android Apps. Make your own iPhone App. Seek Thermal launches its thermal camera for the average consumer with a smartphone.

A lot of today’s mainstream technology got its start as fancy research or scientific technology. 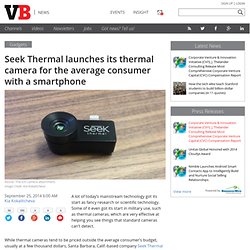 Some of it even got its start in military use, such as thermal cameras, which are very effective at helping you see things that standard cameras can’t detect. While thermal cameras tend to be priced outside the average consumer’s budget, usually at a few thousand dollars, Santa Barbara, Calif. -based company Seek Thermal is launching one today for for iOS and Android devices today priced at a consumer-friendly $199.

The camera attachment is now available for purchase through Seek’s website as well as Amazon. Unlike normal cameras which use light to form images, thermal cameras have special lenses and sensors that capture heat and construct images based on the variations they pick up on. Seek Thermal was founded by Bill Parrish and Tim Fitzgibbons and has raised $30 million in funding from unnamed private equity and institutional investors. Mobile developer or publisher? How To Find Virtually Any Mobile App For Free, Legally. I was recently looking for a new game to pass the time on my Android tablet; a quick browse through the Play Store yielded little of interest in terms of free titles. 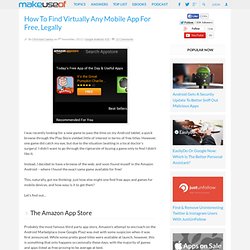 However, one game did catch my eye, but due to the situation (waiting in a local doctor’s surgery) I didn’t want to go through the rigmarole of buying a game only to find I didn’t like it. Instead, I decided to have a browse of the web, and soon found myself in the Amazon Android – where I found the exact same game available for free! This, naturally, got me thinking: just how else might one find free apps and games for mobile devices, and how easy is it to get them? Let’s find out… The Amazon App Store Probably the most famous third party app store, Amazon’s attempt to encroach on the Android Marketplace (now Google Play) was met with some suspicion when it was first announced. Available as a free mobile app from Amazon the daily free app is usually listed alongside other titles that may or may not be of interest. AppCrawlr: the app discovery engine. 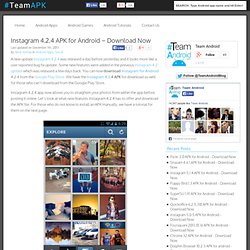 Some new features were added in the previous Instagram 4.2 update which was released a few days back. You can now download Instagram for Android 4.2.4 from the Google Play Store. We have the Instagram 4.2.4 APK for download as well for those who can’t download from the Google Play Store. Instagram 4.2.4 app now allows you to straighten your photos from within the app before posting it online. MX Player. MX Player - The best way to enjoy your movies. a) HARDWARE ACCELERATION - Hardware acceleration can be applied to more videos with the help of new H/W decoder. b) MULTI-CORE DECODING - MX Player is the first Android video player which supports multi-core decoding. 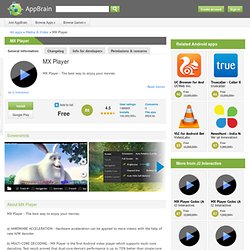 Test result proved that dual-core device’s performance is up to 70% better than single-core devices. c) PINCH TO ZOOM, ZOOM AND PAN - Easily zoom in and out by pinching and swiping across the screen. Make your own iPhone App.

AutomateIt-Automate Your Droid. MacroDroid is a task automation and configuration app that focuses heavily on usability with a simple, attractive UI and logical step by step process. 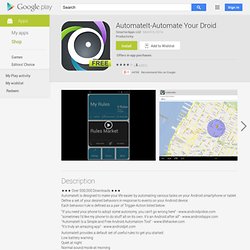 From AndroidTapp.com: "MacroDroid is an utterly brilliant, and less expensive, alternative (to Tasker) that is definitely worth trying out" (4.6/5)Please note MacroDroid is currently only available in the English language. Preliminary work is underway on a Spanish translation which we hope to make available in the coming months.A few examples of what MacroDroid can automate: • Shake the device to upload the last photo to Facebook.• Turn on Wifi or Data connection when you launch a particular app (and off again when closed).• Respond to an incoming SMS by sending your current location.• Toggle the power button to tell you the time (e.g. when its in your pocket).• Use NFC tags to configure the device (turn on bluetooth, set volume etc).Creating a custom Macro is easy:

[ROOT] Framaroot, a one-click apk to root some devices. Hi, Here an one-click application to install Superuser and su binary on phone. 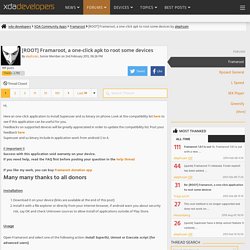 Look at the compatibility list here to see if this application can be useful for you. Feedbacks on supported devices will be greatly appreciated in order to update the compatibility list. [ROOT] Framaroot, a one-click apk to root some devices. What is Xposed Framework For Android & How To Install It [Guide] Android is known for its extensive customization potential but unless you have a rooted device, you can only customize it using widgets and different home screen launcher apps. 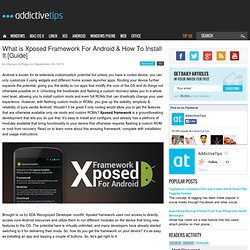 Rooting your device further expands the potential, giving you the ability to run apps that modify the core of the OS and do things not otherwise possible on it. Unlocking the bootloader and flashing a custom recovery takes you to a whole next level, allowing you to install custom mods and even full ROMs that can drastically change your user experience. However, with flashing custom mods or ROMs, you give up the stability, simplicity & reliability of pure vanilla Android. Wouldn’t it be great if only rooting would allow you to get the features that are otherwise available only via mods and custom ROMs? Xposed framework is a groundbreaking development that lets you do just that. Before You Proceed Disclaimer: Please follow this guide at your own risk.

Installing Xposed Framework. Installing And Configuring Google Android 4.3 x86 On VirtualBox For Better Performance. Snapseed. With PhotoGrid you can make your photos collection into amazing collage. #1 Collage app on Android, over *** 51 Million*** users like PhotoGrid.* Top1 in Photography over 11 Countries.* Top5 in Photography over 46 Countries. 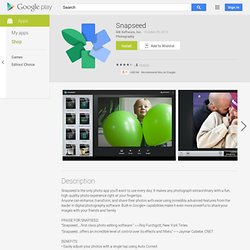 Photo Grid's simple interface and outstanding menu of pre-designed grids make it the best collage app on the market. - CNET We love Photo Grid. It can work hand in hand with Instagram to quickly produce beautiful results... and its interface is so intuitive that anyone will be able to master it - PC Advisor. Free Android apps & games download. ChatON. Spend time connecting with your buddies via ChatON! With a Samsung account, you can enjoy ChatON across your smartphone, tablet, and computer. ChatON features free text, voice, and video messaging. The app allows you to express yourself in a variety of unique and fun ways, from sending handwritten notes to sharing Stickers. You don’t need to worry about language barriers anymore with the free Samsung in-app text translator. ChatON is currently available in 237 countries, 67 languages, on 9 mobile platforms and has over 200 million users. ♡LIke our facebook fan page and find more about ChatON Message RecallSend the wrong message to the wrong person?

Turn Your Android Phone into a Personal Trainer. There's no replacement for the variety of equipment and workout types you'll get at a gym, but with the right mobile apps for your Android device and the discipline to use them, you can get a great workout from anywhere. How to Use Your Pocket Gym Not everyone has the time to go or the money to spend on a gym membership.

Google Gesture Search: Better Than Your Launcher [Android] Look at your phone. Now look at me. Now look at your phone. Now me. How To Connect a USB Keyboard To Your Android Phone. 8 Great Evernote Widgets & Add-ons [Android] Have you been collecting awesome notes and information in Evernote for a while, but not really experimented with the many Android apps and widgets you can use yet? Well, if this sounds like you then you’ll love today’s line-up of apps. We know there’s a good number of Evernote fans and Android fans lurking on MakeUseOf, so we thought we’d make a list of apps and widgets fans of both would appreciate. So here’s the best Evernote apps and widgets for Android! The Official Evernote App. Mansiloko. Mansiloko. CloudApps - Align. Engage. Sustain. AirDroid. Firmware Page. Best Android Apps. Advertisement. The Best Personal Finance Apps. Need to fix your budget?

Flipboard - Google Play. Document Print App for ANDROID OS. The Best Text Messaging Replacement for Android. Dolphin Browser™ Listen to your music collection on the web and your mobile phone. i2theme v12.1 - ADW i2Theme. Android App of the Week - Best Android Apps. Microsoft releases Hotmail app for Android; people stuck in 1999 begin rejoicing - Cell Phone News and Reviews - IntoMobile. You can tell a lot about a person by the domain name attached to their email address. If it ends with @aol.com, chances are the poor soul using that email account doesn’t know the difference between the power button on their laptop and their asshole. If it’s yahoo.com, run away fast because it’s an old man posing as a teenage girl from Florida looking to hookup. All the cool kids use Google’s email service because it’s got threading, the search is incredible, and the storage space is practically unlimited.