Kapal Bambu. Kapal Bambu Interior. Bamboo Architecture Collection. African Bamboo. Bamboo for Africa. Bamboo shoots up in Eastern Cape. Details 05 December 2011 Bamboo cultivation and its use in products ranging from furniture to biofuel and baskets, is set to take off in the Eastern Cape province. 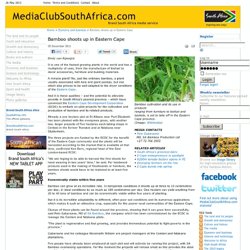 (Image: Wikimedia ) MEDIA CONTACTS • Pelo Gabaraane This email address is being protected from spambots. You need JavaScript enabled to view it. RELATED ARTICLES • South Africa's greenest dairy • E Cape entrepreneurs in spotlight • R200m tomato factory opens in PE • Emerging farmers on the rise • E Cape bursts into spring Emily van Rijswijck It is one of the fastest growing plants in the world and has a multiplicity of uses, from the manufacture of biofuel to decor accessories, furniture and building materials. A miracle plant? And it is these qualities – and the potential to alleviate poverty in South Africa's poorest province – which have convinced the Eastern Cape Development Corporation (ECDC) to embark on pilot projects for the cultivation and production of bamboo and its related products. Economically viable within five years. Bamboo Vacation Home. Casa Atrevida is a luxurious bamboo vacation home located on Preciosa Beach in Costa Rica. 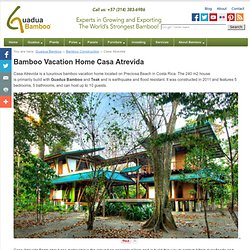 The 240 m2 house is primarily build with Guadua Bamboo and Teak and is earthquake and flood resistant. It was constructed in 2011 and features 5 bedrooms, 5 bathrooms, and can host up to 10 guests. Casa Atrevida floats about one meter above the ground on concrete pillars and is build this way to protect it from river floods and excessive rain during the wet season. The house is divided into two parts, each with two floors and an open corridor that connects the two segments. Guadua Bamboo dominates the design, being used both for decorative purposes and as a structural material. Casa Atrevida features a rooftop garden with 30 different plant species that serve several functions. Thin sliding doors made from teak let air circulate freely in the rooms on the second floor, this creates cross breezes for natural ventilation during the day.

Architect: Luz de Piedra Arquitectos. Vo Trong Nghia Sinbadesign. Vo Trong Nghia studied architecture as a student on the Japanese Government’s Scholarship. After graduation from Tokyo University and Nagoya Institute of Technology, he returned to Vietnam and created an energy-saving architectural style through using environmentally – friendly materials and architectural design. In 2006, he started his own architectural company in Vietnam, Votrongnghia Co. , Ltd . Alongside his architectural practice, Nghia has been invited to have lectures in several foreign countries such as China, Japan, Sri Lanka … The idea in design of architectural model made from the low-cost materials is necessarily raised in order to make high speed construction and ease in transport.

The location that selected to do the full-scale test is an area of 5000m2 in Wind and Water Cafe, which has been awarded the gold medal in the Arch Asia Contest and the second prize in the International Bamboo Competition). Bamboo Pavilion Interior. 24H Architecture. Architecture The 6 star hotel resort Soneva Kiri is located on Koh Kood, an island in the Gulf of Thailand. 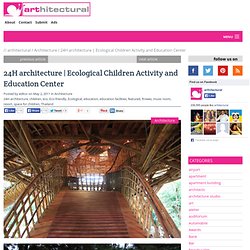 At this unique site, 24H-architecture designed a series of ecological icons to contribute to Six Senses’ high ambitions in design and ecology. Most prominent is The Children Activity and Learning Centre, which will provide visiting children a wide range of entertaining activities as well as raise the level of ecological awareness with them.

This Den provides an Auditorium/Cinema for films, lectures and plays, a library with books on permaculture and local traditions, an Art room, a Music room and Fashion room, thus giving children both creative and ecological education while playing. The Den is located at a rocky slope close to the sea. Next to the Den, the site provides a sleeping pod for toddlers, and a toilet building as well as a cooking cave with vegetable garden for the children to prepare their own lunch with a special cook. Bamboo construction & design. Bamboo Buildings. Bamboo Buildings Grow it, build with it. 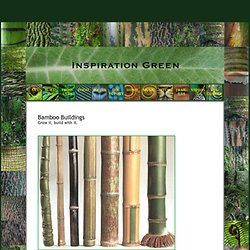 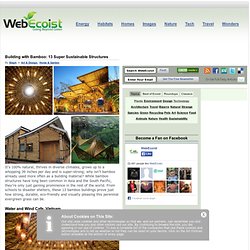 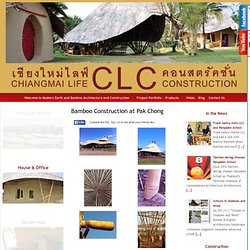 Many European castles and the Great Wall of China were built using this technology. As the name implies, rammed earth construction involves the use of compressed earth. A mixture of earth consisting of the right amount of sand, gravel and clay is poured into a mould or formwork. Soil mixture The ideal soil mixture for rammed earth consists of clay, sand and gravel up to a size of 3cm. Cement replaced the function of the clay as the glue in modern age. Besides this earth building technique, there are other common methods like adobe (earth bricks), wattle and daub (wood or bamboo grids plastered with earth), and cob (a mixture of earth, straw or any natural fiber, and sand). Strong Load Bearing Walls Rammed earth has the highest density of all earth-building techniques and has the highest compression strength. How To Build A Rammed Earth Wall? How Long Does It Last?