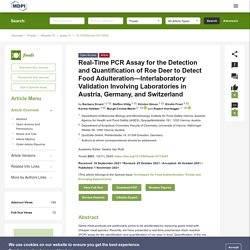 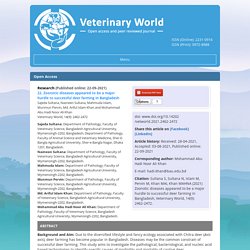 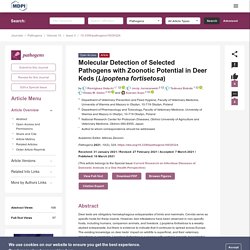 Cervids serve as specific hosts for these insects. However, ked infestations have been observed in non-specific hosts, including humans, companion animals, and livestock. Lipoptena fortisetosa is a weakly studied ectoparasite, but there is evidence to indicate that it continues to spread across Europe. The existing knowledge on deer keds’ impact on wildlife is superficial, and their veterinary importance is enigmatic. Lipoptena fortisetosa is a species with vectorial capacity, but potential pathogen transmission has not been assessed. ►▼ Show Figures. VIRUSES 17/08/20 Rabbit Hemorrhagic Disease Virus Isolated from Diseased Alpine Musk Deer (Moschus sifanicus) Rabbit hemorrhagic disease virus (RHDV) is the causative agent of rabbit hemorrhagic disease (RHD), and its infection results in mortality of 70–90% in farmed and wild rabbits. 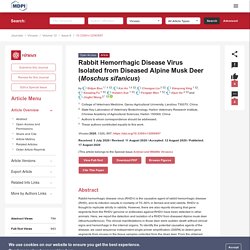 RHDV is thought to replicate strictly in rabbits. However, there are also reports showing that gene segments from the RHDV genome or antibodies against RHDV have been detected in other animals. Here, we report the detection and isolation of a RHDV from diseased Alpine musk deer (Moschussifanicus). The clinical manifestations in those deer were sudden death without clinical signs and hemorrhage in the internal organs. To identify the potential causative agents of the disease, we used sequence independent single primer amplification (SISPA) to detect gene segments from viruses in the tissue samples collected from the dead deer. ►▼ Show Figures Figure 1. VIRUSES 13/07/20 Serosurveillance and Molecular Investigation of Wild Deer in Australia Reveals Seroprevalence of Pestivirus Infection.

Since deer were introduced into Australia in the mid-1800s, their wild populations have increased in size and distribution, posing a potential risk to the livestock industry, through their role in pathogen transmission cycles. 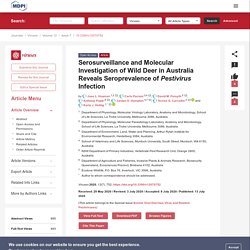 In comparison to livestock, there are limited data on viral infections in all wildlife, including deer. The aim of this study was to assess blood samples from wild Australian deer for serological evidence of exposure to relevant viral livestock diseases. Blood samples collected across eastern Australia were tested by ELISA to detect antigens and antibodies against Pestivirus and antibodies against bovine herpesvirus 1.

A subset of samples was also assessed by RT-PCR for Pestivirus, Simbu serogroup, epizootic hemorrhagic disease virus and bovine ephemeral fever virus. Our findings demonstrated a very low seroprevalence (3%) for ruminant Pestivirus, and none of the other viruses tested were detected. UNIVERSITY OF FLORIDA 22/05/20 Présentation: The Cervidae Health Research Initiative: Promoting deer health to the farmed deer industry in Florida. TRANSBOUNDARY AND EMERGING DISEASES 01/08/20 Detection of new Crimean–Congo haemorrhagic fever virus genotypes in ticks feeding on deer and wild boar, Spain. 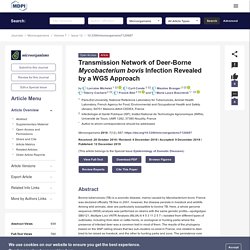 France was declared officially TB free in 2001, however, the disease persists in livestock and wildlife. Among wild animals, deer are particularly susceptible to bovine TB. Here, a whole genome sequence (WGS) analysis was performed on strains with the same genetic profile—spoligotype SB0121, Multiple Loci VNTR Analysis (MLVA) 6 4 5 3 11 2 5 7—isolated from different types of outbreaks, including from deer or cattle herds, or zoological or hunting parks where the presence of infected deer was a common trait in most of them.

The results of the phylogeny based on the SNP calling shows that two sub-clusters co-exist in France, one related to deer bred to be raised as livestock, and the other to hunting parks and zoos. ►▼ Show Figures Figure 1 Bovine tuberculosis (TB) is a zoonotic disease, mainly caused by Mycobacterium bovis. ►▼ Show Figures Figure 1. Microbial Pathogenesis Volume 149, December 2020, Seroprevalence of Toxoplasma gondii infection in the endangered Père David's deer (Elaphurus davidianus) in China. Microb Genom. 2020 Aug; 6(8): Mycobacterium bovis genomics reveals transmission of infection between cattle and deer in Ireland. 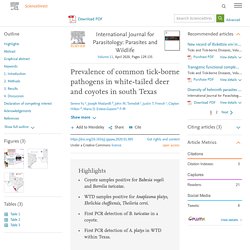 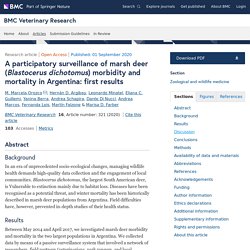 In IW, the network included personnel from national and provincial protected areas, NGOs, and private veterinarians. In LD, the activities were integrated into the work programme and management structure of the “Marsh Deer Scientific Technical Committee” (CCP) and included samplings during live captures carried out by “Pantano Project”. The work was gradually articulated in both study areas.

PLOS 07/04/17 Mule deer spatial association patterns and potential implications for transmission of an epizootic disease. Abstract Animal social behaviour can have important effects on the long-term dynamics of diseases. 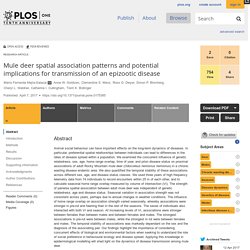 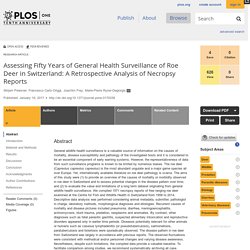