Call function by (string) name on node.js. Windows IoT - Unavailable Universal APIs. 6. Objects and classes by example - Mixu's Node book. In this chapter, I: cover OOP in Javascript by example point out a few caveats and recommended solutions I'm not covering the theory behind this, but I recommend that you start by learning more about the prototype chain, because understanding the prototype chain is essential to working effectively with JS. 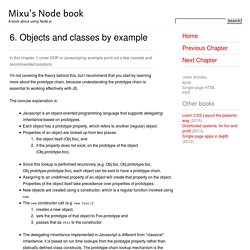 The concise explanation is: Javascript is an object-oriented programming language that supports delegating inheritance based on prototypes. Each object has a prototype property, which refers to another (regular) object. Properties of an object are looked up from two places: the object itself (Obj.foo), and if the property does not exist, on the prototype of the object (Obj.prototype.foo). Metaduck.

Recently I blogged about how I like to build my JavaScript “classes”. 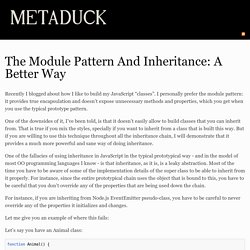 I personally prefer the module pattern: it provides true encapsulation and doesn’t expose unnecessary methods and properties, which you get when you use the typical prototype pattern. One of the downsides of it, I’ve been told, is that it doesn’t easily allow to build classes that you can inherit from. That is true if you mix the styles, specially if you want to inherit from a class that is built this way. But if you are willing to use this technique throughout all the inheritance chain, I will demonstrate that it provides a much more powerful and sane way of doing inheritance. One of the fallacies of using inheritance in JavaScript in the typical prototypical way - and in the model of most OO programming languages I know - is that inheritance, as it is, is a leaky abstraction. Let me give you an example of where this fails: Let’s say you have an Animal class: And let’s say you want to inherit from it.

Wrapping Kue wth Promises and Domains · Steven Lu. If you’ve ever used kue before, you’ll notice its callback based. 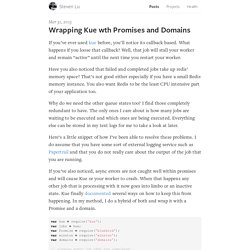 What happens if you loose that callback? Well, that job will stall your worker and remain “active” until the next time you restart your worker. Have you also noticed that failed and completed jobs take up redis’ memory space? That’s not good either especially if you have a small Redis memory instance. You also want Redis to be the least CPU intensive part of your application too. Mongoose ODM v3.6.11. Install MongoDB on Windows — MongoDB Manual 2.4.4. The Future is Bright. Express - MongoDB schema design for multible auth user accounts. Node-validator/README.md at master · chriso/node-validator. Nodejs Windows Setup · pcimino/nodejs-restify-mongodb Wiki. Installing Python & C++ Libraries Apologies to Ubuntu & Mac users A user emailed me asking about some errors he got setting up this project. 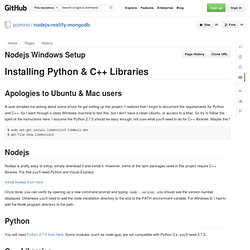 I realized that I forgot to document the requirements for Python and C++. So I went through a clean Windows machine to test this, but I don't have a clean Ubuntu, or access to a Mac. So try to follow the spirit of the instructions here. . $ sudo apt-get install libdevil1c2 libdevil-dev $ apt-file show libdevil1c2 Nodejs Nodejs is pretty easy to setup, simply download it and install it. Install Nodejs from here. Once done, you can verify by opening up a new command prompt and typing node --version, you should see the version number displayed.

Python. Node.js Debugging Support extension. Sign in to write a review Sort by: by 月下听禅 | January 22 2014 Could anyone give a sample? 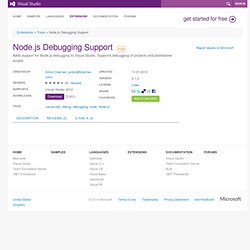 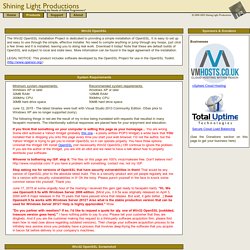 The reason? You get to talk to the original/current developer of the product one-on-one...this means that there is no annoying third party using scripted responses. The downside is that, since you ARE e-mailing a real developer, you need to realize this and respect the developer, no matter what mood he/she is in. A developer's time is extremely valuable and a developer may not be in the most pleasant mood all the time. Node Gyp. Express - node.js web application framework. Breaking down app.js file - nodejs, express, mongoose. A working draft of the app architecture is in progress, visit the boilerplate wiki Ok, this post is long overdue! 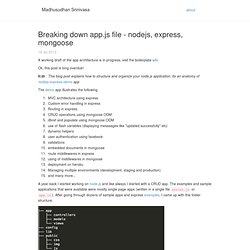 A year back I started working on node.js and like always I started with a CRUD app. Also, being a rails developer, it was quite easy to think about the way your app has to be structured and organized. Modules used. Node.js - nodejs + passport + express 3.0 + connect-flash no flashing. Passport - Simple, unobtrusive authentication for Node.js. CrowdNotes/models/user.js at master · rockbot/CrowdNotes. Node.js - How to know if i´m logged in with passport.