A Point of View: Do parliament's select committees wield too much power? Image copyright Thinkstock Parliamentary select committees have seen their profile grow over the past few years, but are they the right way of holding power to account, asks Tom Shakespeare. 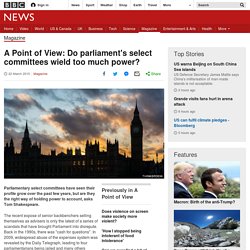 The recent expose of senior backbenchers selling themselves as advisers is only the latest of a series of scandals that have brought Parliament into disrepute. Back in the 1990s, there was "cash for questions". In 2009, widespread abuse of the expenses system was revealed by the Daily Telegraph, leading to four parliamentarians being jailed and many others disgraced. But even without this rottenness, there can be scepticism about the way the House of Commons operates. However, it's not all bad news for politicians. For example, it was his appearance before the Culture Media and Sport Select Committee that Rupert Murdoch described as the "most humble day of my life" A ‘supersize committee’ could hamper Parliament’s scrutiny of Brexit.

The creation of a new government department like the Department for Exiting the European Union (DExEU) would normally be followed by the establishment of an 11-member select committee to scrutinise it. 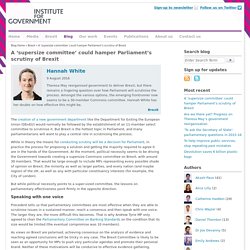 But Brexit is the hottest topic in Parliament, and many parliamentarians will want to play a central role in scrutinising the process. While in theory the means for conducting scrutiny will be a decision for Parliament, in practice the process for proposing a solution and getting the majority required to agree it are in the hands of the Government. At the moment, political necessity seems to be driving the Government towards creating a supersize Commons committee on Brexit, with around 30 members.

That would be large enough to include MPs representing every possible shade of opinion on Brexit, the minority as well as larger parties, and every nation (and maybe region) of the UK, as well as any with particular constituency interests (for example, the City of London). Speaking with one voice. Elected Chairs do not seem to have brought a new kind of parliamentarian to Select Committees. The Wright reforms have been widely credited with revitalising Parliamentary Select Committees. 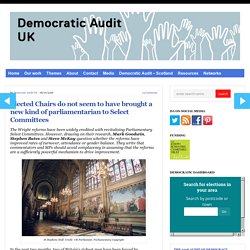 However, drawing on their research, Mark Goodwin, Stephen Bates and Steve McKay question whether the reforms have improved rates of turnover, attendance or gender balance. They write that commentators and MPs should avoid complacency in assuming that the reforms are a sufficiently powerful mechanism to drive improvement. St Stephens Hall. Credit: UK Parliament. Select Committees are engaging better than ever before, but while much has been accomplished, much more remains possible.

Top civil servant kicked out of Parliament committee for 'unsatisfactory' answers to MPs. Select committees: Parliament is not dead. There are ongoing debates about what useful purpose Parliament serves A recent report by the Home Affairs Select Committee criticising the government’s policy on the police once again highlights how Parliament performs an important oversight function. 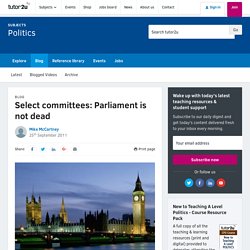 According to the BBC: “The Metropolitan Police’s counter-terrorism role should be given to the new National Crime Agency when it becomes operational in 2013, MPs say. Health Committee and Sugary Drinks. The Health Select Committee in the House of Commons has recommended a 20% tax on sugary drinks in an effort to encourage people, especially children, not to drink them. 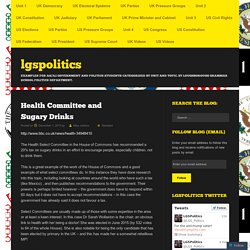 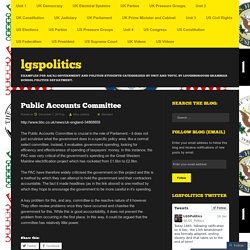 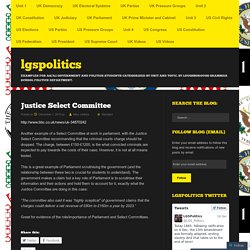 The charge, between £150-£1200, is the what convicted criminals are expected to pay towards the costs of their case. However, it is not at all means tested. This is a great example of Parliament scrutinising the government (and the relationship between these two is crucial for students to understand). The government makes a claim but a key role of Parliament is to scrutinise their information and their actions and hold them to account for it, exactly what the Justice Committee are doing in this case: Select Committee pre-appointment hearings have helped rebalance the relations... The Labour government of 1997-2010 introduced pre-appointment hearings for some ministerial appointments, formalising a de facto system which had been developing gradually. 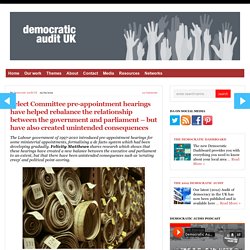 Felicity Matthews shares research which shows that these hearings have created a new balance between the executive and parliament to an extent, but that there have been unintended consequences such as ‘scrutiny creep’ and political point-scoring. The UK stands in a unique position in relation to its parliament’s relative strength over executive patronage. In June 2007, the Labour Government announced the introduction of pre-appointment hearings for specific ministerial appointments, effectively formalising a process of scrutiny that had developed unofficially within the select committee system of the House of Commons over the previous decade.