The growing world of cyber security. Federal budget 2016: Liberals to spend $11.9 billion on infrastructure over two years. The Liberal government claims its new two-phase infrastructure spending program will boost Canada’s GDP by 0.2 per cent this year and 0.4 per cent next year. 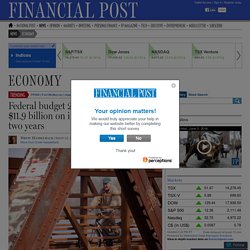 Phase one consists of $11.9 billion for a mix of “green,” social and transit projects over the next two years. Phase two will focus on the construction of projects over the next eight years that will go “hand in hand with the transition to a low-carbon economy,” the government said. It expects phase-one spending to have an immediate impact on Canada’s gross domestic product. DP Principles 4. Anti-Choice Groups Use Smartphone Surveillance to Target 'Abortion-Minded Women' During Clinic Visits - Rewire. Last year, an enterprising advertising executive based in Boston, Massachusetts, had an idea: Instead of using his sophisticated mobile surveillance techniques to figure out which consumers might be interested in buying shoes, cars, or any of the other products typically advertised online, what if he used the same technology to figure out which women were potentially contemplating abortion, and send them ads on behalf of anti-choice organizations? 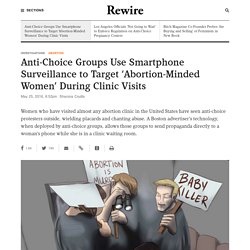 The executive—John Flynn, CEO of Copley Advertising—set to work. He put together PowerPoint presentations touting his capabilities, and sent them to groups he thought would be interested in reaching “abortion-minded women,” to use anti-choice parlance. Before long, he’d been hired by RealOptions, a network of crisis pregnancy centers (CPCs) in Northern California, as well as by the evangelical adoption agency Bethany Christian Services. Flynn’s endeavors quickly won him attention in the anti-choice world. 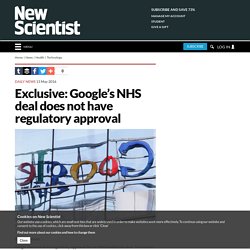 Two weeks ago, New Scientist revealed that Google’s artificial intelligence company DeepMind has access to the personal medical information of millions of UK patients through a data-sharing agreement with the Royal Free London NHS Foundation Trust. But that’s only part of the story. A New Scientist investigation has found that the project is being carried out without the ethical and regulatory approval that experts say are required. Data Law’s Radioactive Decay. Data Law’s Radioactive Decay Law’s definition of privacy is at odds with digitization, science, and the modern economy. 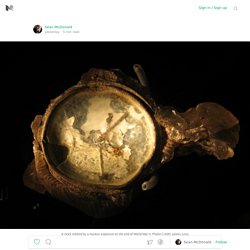 We’re going to need a new approach. Investigating the algorithms that govern our lives. Image: Algorithm by Jared Tarbell On March 15, Instagram posted a note on its blog that sent the internet into a frenzy: “To improve your experience, your feed will soon be ordered to show the moments we believe you will care about the most.” 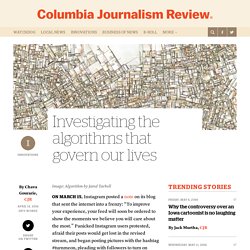 Panicked Instagram users protested, afraid their posts would get lost in the revised stream, and began posting pictures with the hashtag #turnmeon, pleading with followers to turn on notifications for their accounts. In response to the uproar, Instagram posted a tweet that amounted to, “Hey, calm down. Discrimination in Online Ad Delivery. A Google search for a person's name, such as "Trevon Jones", may yield a personalized ad for public records about Trevon that may be neutral, such as "Looking for Trevon Jones? 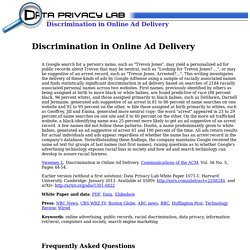 ... How Companies Learn Your Secrets. Understanding Privacy Online: Development of a Social Contract Approach to Privacy. Acquisti, A., & Grossklags, J. (2005). 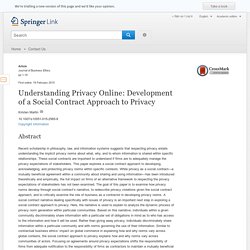 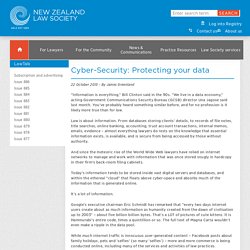 “We live in a data economy,” acting Government Communications Security Bureau (GCSB) director Una Jagose said last month. You’ve probably heard something similar before, and for no profession is it likely more true than for law. Law is about information. From databases storing clients’ details, to records of file notes, title searches, online banking, accounting, trust account transactions, internal memos, emails, evidence – almost everything lawyers do rests on the knowledge that essential information exists, is available, and is secure from being accessed by those without authority. And since the meteoric rise of the World Wide Web lawyers have relied on internet networks to manage and work with information that was once stored snugly in hardcopy in their firm’s back-room filing cabinets. Online Profiling and Invasion of Privacy: The Myth of Anonymization. We have been conditioned to accept that privacy is dead. 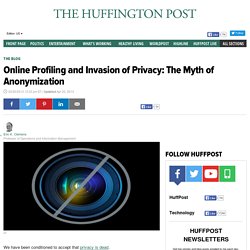 We have been conditioned to accept privacy abuses as the price of using the Internet. These abuses generally involve having our search engine send us “better” ads, which most of us believe cannot be too dangerous. They are “only” ads, and they are “anonymous.” Digitalisierung und Überwachung: Wenn Roboter Sheriff spielen. Media – Knightscope, Inc. These New Security Robots Are Keeping Microsoft Safe. Smartphone-Sucht in Südkorea: Offline steigt die Herzfrequenz. Story of cities #future: what will our growing megacities really look like? Amid the much-mythologised graffiti that appeared around Sorbonne University during the French civil unrest in May 1968, one line still stands out as intriguing and ambiguous: “The future will only contain what we put into it now.” 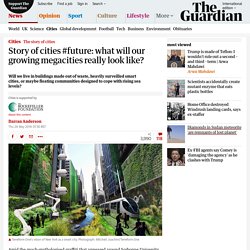 What appears at first utopian has more than a hint of the ominous. While augmented reality creates a city individualised for every occupant, and developments in modular architecture and nanotechnology might result in rooms that change form and function at a whim, the problem lies in the unforeseen. The smart city will also be the surveillance city. For the moment, we remain largely wedded to superficial visual futures. Story of cities #48: Cybercity, Mauritius – a vision of Africa's 'smart' future?

As the fruit bat flies, it’s only 300 metres from Cyber Tower 1 to the massive food court and commercial centre that was built to service Ebène Cybercity – the hi-tech office community on the outskirts of Mauritius’s capital, Port Louis. But walking from the ostentatious lobby of Cyber Tower 1 to the shops and restaurants can take 20 minutes – if you don’t get lost along the way. The fastest route by foot bisects car parks, traverses overgrown vacant lots, and stumbles over temporary walkways past some of the biggest businesses on the island. CONNECTOGRAPHY: Mapping the Future of Global Civilization — Parag Khanna. We’re accelerating into a future shaped less by countries than by connectivity.

Mankind has a new maxim – Connectivity is destiny – and the most connected powers, and people, will win. In this book Parag Khanna guides us through the emerging global network civilization in which mega-cities compete over connectivity more than borders. His journeys take us from Ukraine to Iran, Mongolia to North Korea, Panama City to Dubai, and the Arctic Circle to the South China Sea—all to show how 21st century conflict is a tug-of-war over pipelines and Internet cables, advanced technologies and market access. Yet Connectography is a hopeful vision of the future. Ransomware and DDoS combine to form a dangerous new two-pronged cyber attack. Related topicsMalware Security Related articles Share article.

Scientists Enable Computers to Generate True Random Numbers. In Brief Computer scientists from the University of Texas have formulated a method that would enable computers to generate "true random numbers" as opposed to "pseudorandom numbers," taking encryption systems a step higher. Random Was Never Really Random When a computer generates a “random” number, it goes through certain algorithms that will allow it to come up with that number, which means it wasn’t really random after all. Random numbers are valuable for computers for purposes such as games, gambling, and most importantly, encryption. Auto-Hacking in Österreich derzeit nicht strafbar. Regeln für Roboterautos: Gesetze für autonomes Fahren fehlen. Hacker übernehmen Kontrolle über PKW. § 202c StGB Vorbereiten des Ausspähens und Abfangens von Daten - dejure.org. Selbstfahrende Autos: Wer haftet?

Autonomes Fahren: Kabinett erlaubt teilautomatisiertes Fahren. NHTSA and Vehicle Cybersecurity. Introduction In 2013, 32,719 people died on the Nation's roadways. Sadly, NHTSA estimates 94 percent of highway crashes are a result of human error. Today's electronics, sensors, and computing power enable the deployment of safety technologies, such as forward-collision warning, automatic-emergency braking, and vehicle-to-vehicle technologies, which can keep drivers from crashing in the first place. Given the potential of these innovations, NHTSA is looking at all of our tools, as well as exploring new ones, that can be used to deploy these technologies in safe and effective ways, taking steps to address the new challenges they pose — particularly with respect to cybersecurity. Michigan Senator Proposes Auto Industry Step Up Cybersecurity Efforts To Avoid Legislation.