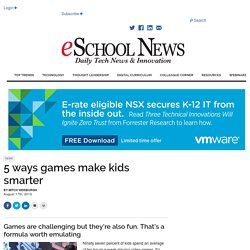 That’s a formula worth emulating Ninety seven percent of kids spend an average of ten hours a week playing video games. It’s hard work, but they keep coming back. They often fail at whatever they are trying to do, but they persist until they learn the strategies, concepts, and skills to achieve their goals. eSchool News edWeb, Games4Ed launch game-based learning initiative. Collaborative efforts will help expand knowledge about game-based learning’s potential for students edWeb.net, a professional learning and social network for the education community, is partnering with Games4Ed, a new organization recently established to further the use of games and other immersive learning strategies in schools, to expand and deepen collaboration on game-based learning. 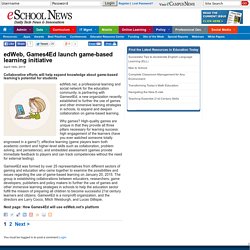 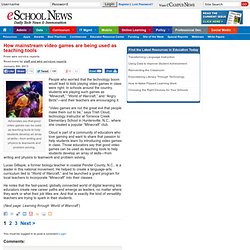 People who worried that the technology boom would lead to kids playing video games in class were right: In schools around the country, students are playing such games as “Minecraft,” “World of Warcraft,” and “Angry Birds”—and their teachers are encouraging it. “Video games are not the great evil that people make them out to be,” says Trish Cloud, technology instructor at Torrence Creek Elementary School in Huntersville, N.C., where she created a popular “Minecraft” club. From Gamification to Touch Interfaces: Designing for 21st Century Learners. The proven efficacy of games in helping students learn has yet to fully surmount skeptical attitudes among educators, but the motivational aspects of games are enticing, as are the futuristic apps and cross-cultural connections that new devices make possible. 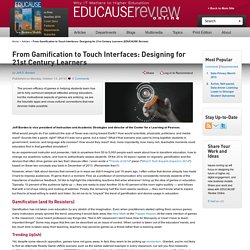 Jeff Borden is vice president of Instruction and Academic Strategies and director of the Center for e Learning at Pearson. Could Video Games Measure Skills That Tests Can’t Capture? A screenshot from the Posterlet game: choosing negative or positive feedback. 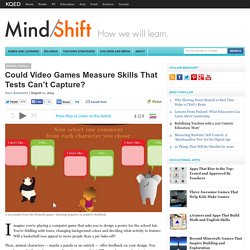 Imagine you’re playing a computer game that asks you to design a poster for the school fair. You’re fiddling with fonts, changing background colors and deciding what activity to feature: Will a basketball toss appeal to more people than a pie bake-off? ELI7106.pdf. Game-Based Learning: Resource Roundup. Using games to measure student skills. Students’ actions and choices while playing games could very well be used for this purpose, said Kristen DiCerbo, Ph.D., principal research scientist at Pearson. 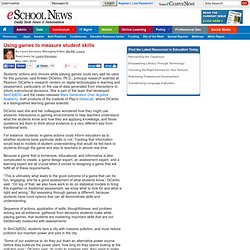 Research-based games help make learning fun again. VINCI Education taps the power of games to help students learn Young children are naturally curious, and one of the main ways they learn is through play. 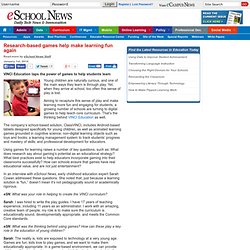 Yet, when they arrive at school, too often this sense of play is lost. Aiming to recapture this sense of play and make learning more fun and engaging for students, a growing number of schools are turning to digital games to help teach core curriculum. That’s the thinking behind VINCI Education as well. VINCI offers blended learning for pre-K. VINCI Education’s founder, Dr. 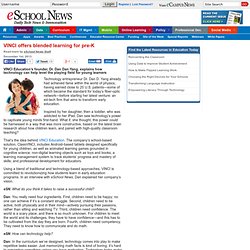 Dan Dan Yang, explains how technology can help level the playing field for young learners Technology entrepreneur Dr. Dan D. Yang already had achieved fame within the world of physics, having earned close to 20 U.S. patents—some of which became the standard for today’s fiber-optic network—before starting her latest venture: an ed-tech firm that aims to transform early education.

Engaging learners through games: Help or hype? By Ben L. 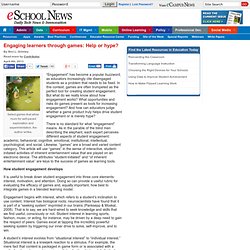 Grimley Read more by Contributor April 4th, 2013 Select games that allow room for self-paced exploration and experimentation, the author writes. “Engagement” has become a popular buzzword, as educators increasingly cite disengaged students as a problem that needs to be fixed. In this context, games are often trumpeted as the perfect tool for creating student engagement. But what do we really know about how engagement works? There is no standard for what “engagement” means. How student engagement develops It is useful to break down student engagement into three core elements: interest, motivation, and attention. ISTE keynote: Gaming has huge educational potential. Speaker Jane McGonigal outlined gaming’s engagement-boosting qualities during ISTE 2013’s opening session. 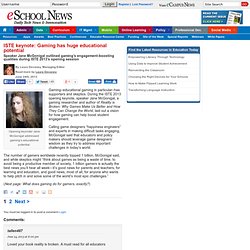 How I turned my classroom into a 'living video game'—and saw achievement soar. By Joli Barker Read more by Contributor March 12th, 2013 In this innovative environment, students are active players in their own educational game. The notion that struggling and failing is important to learning runs counter to traditional approaches to U.S. education. In fact, failure and its accompanying “F” grade stigmatizes a student as unprepared or “challenged” and is usually seen as a predictor of failure in future grades.

In the world of gaming, however, the very elements of struggle, challenge, and failure that discourage kids in the classroom become the primary drivers of engagement and achievement. In 2011, after 14 years of teaching, I decided to transform my second grade classroom into a living video game. How to keep the attention of students is an ongoing topic of conversation among educators. How 'game mechanics' can revitalize education. How to engage girls with gaming. Interactive educational games that are collaborative and focus on ‘social good’ can boost girls’ participation, experts say By Laura Devaney, Managing Editor Read more by Laura Devaney January 17th, 2013 Girls prefer to engage in simulations that put them in real-life situations.

Many people associate video games and gaming with boys, but researchers have discovered that girls become just as engaged when playing interactive educational games featuring certain motivating elements. According to 2012 data from the Entertainment Software Association, 47 percent of all game-players are women, though their data patterns of play differ from those of men. Sixty-one percent of casual gamers, who play games such as “Words with Friends” and “FarmVille,” are women.

How mainstream video games are being used as teaching tools. Bill Gates: Why 'game-based learning' is the future of education. The Gates Foundation is working with the Center for Game Science at the University of Washington on a free, online game called Refraction. In Bill Gates’ vision of the classrooms of the future, students are grouped according to skill set.

One cluster huddles around a computer terminal, playing an educational game or working on a simulator. Another works with a human teacher getting direct instruction, while another gets a digital lesson delivered from their teacher’s avatar. This kind of “game-based” learning is one of the priorities of the Bill & Melinda Gates Foundation, a nonprofit founded by the Microsoft creator. Last year, the foundation announced it would invest $20 million in a variety of teacher tools, including this and other technologies geared toward changing the way teachers teach and kids learn. Gates sat down with The Atlanta Journal-Constitution last week while he was in Atlanta speaking at the Education Commission of the States’ national forum. Game-based learning catching on in schools. Brenden Sewell, Quest Atlantis Remixed’s executive producer, said that support has grown for using games as legitimate education tools. Instead of pulling out books and paper at Nature Hill Intermediate School in Oconomowoc, Wis., on a recent morning, sixth-grader A.J.

Remus and his peers practiced language arts and social studies in a mythical, virtual world. Known as Quest Atlantis, the multi-user, 3-D interactive space allows students to direct avatars on screen through different environments to solve missions based on academic concepts and social skills. Chat windows allow them to engage with classmates’ digital personas, and with the avatars representing students working simultaneously in different states or different countries. “You have to read a lot, and the stuff you submit to the Council has to be good or you can’t move on,” explained Remus, as he took a break to engineer a digital house. Engaging learners through games: Help or hype?